In Still/Born, Mary gives birth to twins – but only one of them survives. While taking care of her living child, Adam, she starts to suspect that a supernatural entity is coming to take him away. Written and directed by Brandon Christensen. Starring Christie Burke and Jesse Moss.

Still/Born, very much like Jennifer Kent’s 2014 debut feature, The Babadook, is a haunted-house horror film that smartly tethers the ghostly goings-on to a sincere and relatable emotional hook. The folkloric bogeyman in that film was constructed from the anxieties of parenting and childhood; how they’re so frequently incompatible. In this one, the lurking ghoul is a literal embodiment of a new mother’s postpartum depression, and the grief of only one of her twins surviving childbirth.

Mary (Christie Burke) settles into motherhood tentatively, like she’s lowering herself into hot water. She returns home with her surviving twin, Adam, and her husband, Jack (Jesse Moss). She’s sleepless. Withdrawn. Jack is less helpful than you might think. It doesn’t say much for him or the script that he’s so dismissive of Mary’s obvious issues, or so unthinking as to sneak up behind her on several occasions. This is a guy who returns home and doesn’t even announce his presence. If I did that and just made my way upstairs, my girlfriend would be behind the door with a bat.

Then again, Jack doesn’t see what Mary sees. He isn’t plagued by hallucinations. Through the baby monitors, he doesn’t spot the something-or-other lurking over Adam’s crib at night. As his wife’s condition worsens, he misses the signs. He’s either away at work or cavorting with Mary’s sexy best friend (Rachel Olsen). His general idiocy makes him something of a villain, though I couldn’t say for certain if that’s intentional.

What is intentional is Still/Born’s metaphor. The film makes no bones about its basis on a real, common medical condition. A therapist (Michael Ironside) twice diagnoses Mary; first with postpartum depression, then, when things escalate, with postpartum psychosis. There’s the usual questioning of the script about whether Mary’s demons are real or imagined. For all intents and purposes, they’re there. 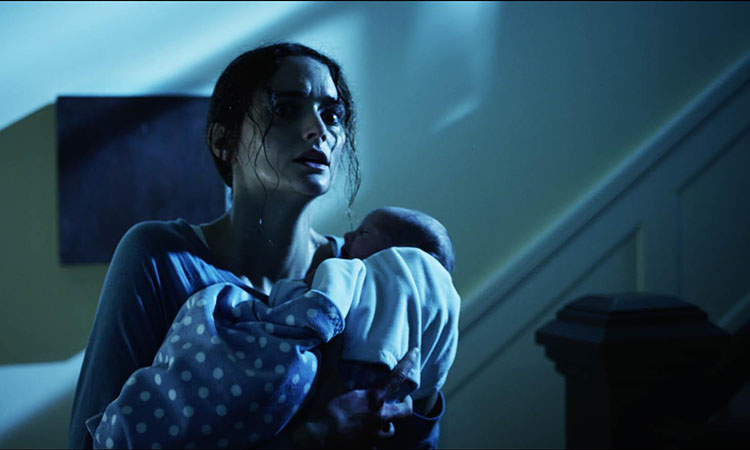 And therein lays the problem. Still/Born has things to say about mental illness, but the only way it’s interested in communicating them is through typical jump-scares and played-out genre conventions. The film clumsily straddles the line between commentary and insensitivity. A midpoint digression in which Mary finds the support of another mother who suffered the same experience isn’t quite the counsel it’s intended to be. Mary’s new ally acts and talks exactly how such characters in movies like this always do. Living in relative isolation, she regales Mary with tales of her own, eerily similar experiences, and how nobody believed them. She pulls out a book of demonic mythology and scrapes a finger across the page with a sketch of the harpy who leers over Adam while he sleeps.

Not only does this stuff lack insight or intelligence, it’s boring. A reliable, considered performance from Christie Burke helps to liven these moments, though. The part asks her to articulate a lot; irrationality, terror, vulnerability. But it also requires her to really act; to surrender to bouts of psychosis and terrifying episodes of desperation. The most noteworthy is when she suspects that she might be able to save her own child by sacrificing her neighbour’s. Burke sells that moment well, despite the film’s rather manipulative use of an infant as a prop for easy tension.

Baby Adam is played by director Brandon Christenson’s real-life new-born niece. I’m glad she’s not in my house – the crying and shrieking is constant. In Still/Born this is another cheap tactic; an uneasy reminder for the audience that this is a film in which something horrible might very well happen to a baby. That isn’t off-limits – horrible things happen to babies all the time – but here it’s deployed so frequently, and so often thoughtlessly, that it’s easy to resent the movie, and Adam, and Christenson, and his brother or sister.

Flawed as it is, Still/Born sustains itself through a finale that thankfully doesn’t descend into a manic confrontation with the demon. The showdown is built on the psychological element of the story, and keeps things ambiguous enough that, even if you’re not entirely thrilled, you’re at least not disappointed by a hackneyed conclusion. This isn’t a great film, but it’s a slightly better one than you might expect.