Game Night is a raucously funny comedy about parlour-loving partiers who find themselves drawn into a web of danger. Written by Mark Perez and directed by John Frances Daley and Jonathan Goldstein, it stars Jason Bateman, Rachel McAdams and Kyle Chandler.

It’s the energy, I think. That’s what elevates Game Night, which is otherwise a smartly written and very funny but not entirely original comedy, to the best surprise of a still-young year. It’s a film about friends whose infectious chemistry feels real, and it puts their game night in your living room. It shouldn’t matter to me, because I hate charades. I mean, how do you mime “Female Fake Taxi” anyway? But luckily the slapstick shenanigans in Game Night start out ludicrous and only get more absurd from there.

A cleverly-edited opening montage introduces us to the main couple, Max and Annie (Bateman and McAdams, who is better at comedy than she is at drama.) We see them meet, bond and eventually marry, with games like Scrabble and Pictionary forming the plastic-tiled bedrock of their relationship. This is, apparently, something couples do, which was news to me. The last time my partner and I played Scrabble I had to dig a lettered square out of my eye, and she still tried to claim the triple points.

This ill-fated game night also includes Annie’s dim-witted, womanising friend Ryan (Billy Magnussen); his much smarter date, Sarah (Sharon Horgan); Kevin and Michelle (Lamorne Morris and Kylie Bunberry), high-school sweethearts who have been married since their late teens; and Max’s estranged brother Brooks (Chandler), a Wall Street trader who turns up in the cherry-red Stringray that Max has coveted since childhood. What a prick.

P****s are important in Game Night. Not just Brooks, who is one, but also Max, who has one that’s firing low-motility sperm. He’s stressed, you see. It’s pretty obvious why with a brother like that. According to his doctor, sibling rivalry is very powerful: “Cain and Abel… the Baldwins.” I mention this because it’s the kind of character psychology you’ll appreciate when the screenwriter tethers it to the twists and turns of the games.

This time, it’s Brooks hosting game night. He invites the gang out to his rich-guy bachelor pad, which he’s modelled for the evening on one of those trendy murder mystery dinner parties. But he’s promptly kidnapped in a home invasion that everyone else assumes is part of the game; he even battles the assailants in a room-to-room fistfight while the others marvel at the quality of his cheese and praise the acting of the (fake) FBI agent who is (really) unconscious on the floor.

The scary-voiced mastermind behind the kidnapping wants a Faberge egg. At some point in the proceedings, I must admit that I lost track of why, but it hardly matters. Game Night is about the broad slapstick comedy of the chase, the deadpan exchanges of the chasers, and the occasional mayhem that erupts when you combine the two.

It helps that the structure of the film is as much about personal discovery as it is about eggs. Although eggs are important to Max and Annie, because whether or not they should fertilize one comprises a lot of their bickering. The sibling rivalry between Max and Brooks is as important here as it was in The Game, which is another film about escapist adventures turned terrifying. Kevin obsesses over whether Michelle was unfaithful to him, which is a subplot with a terrific payoff, and Ryan and Sarah bond over whether one could possibly fancy the other. 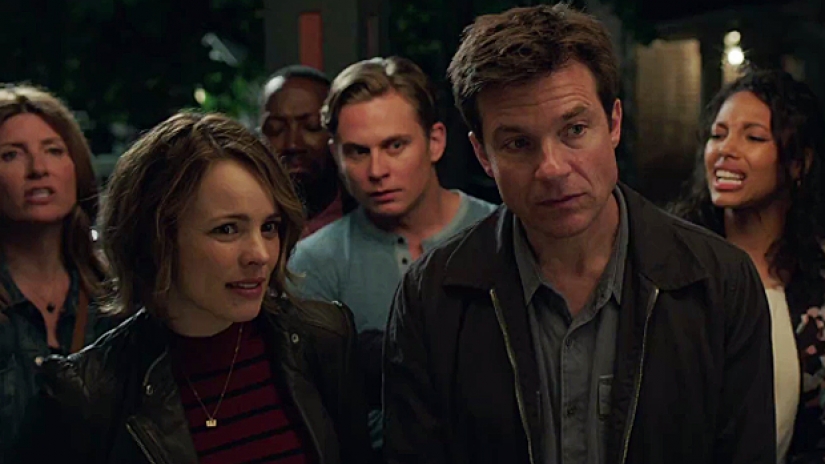 Even the supporting players get some juicy bits. Jeffrey Wright plays that napping Fibbie, Michael C. Hall plays an underworld boss known as The Bulgarian, and Jesse Plemons is on scene-stealing form as Gary, a cop who lives next-door to Max and Annie and has been disinvited from game night since his beloved wife divorced him. None of these characters are who they appear to be at first glance, and probably not after a second look, either.

Game Night is a very good comedy, but perfect adult entertainment. And I don’t mean that it’s R-rated (although it is) or that it’s full of violence and gore (although there’s some of that, too). But for all the car chases and shootouts and madcap mayhem, it’s all rooted in anxieties about aging out of childhood resentments and ideas of romanticism; settling for the normality of marriage and kids and friends and game nights where you don’t play drinking games because you don’t need the stress. The sillier things get, the more relatable the characters become. The more complex the story, the simpler it all seems.

This is all thanks to the cast, and to the deft manipulation of tone by Daley and Goldstein. They know how far is too far. They take you to the edge and let you peer over, but they’re there to drag you back when it seems like you might tumble into the yawning chasm of bad taste. All the while, the cartoonishness is anchored by the chemistry of the couples, who split up into pairs near the film’s beginning and then periodically cross paths and diverge again and again. They all feel like they’ve been friends forever; like they’ll continue to meet up for game night long after the movie ends. That’s so rare in Hollywood that you’re tempted to join them.