Film Stars Don’t Die in Liverpool is the story of the love affair between former Hollywood starlet Gloria Grahame (Annette Bening) and British provincial actor Peter Turner (Jamie Bell) during the closing years of Grahame’s life. It was directed by Paul McGuigan, produced by Barabara Broccoli and Colin Vaines, and written by Matt Greenhalgh, based on Turner’s memoir.

Gloria Grahame (below) starred in a number of Hollywood films in the 1950s; though largely supporting roles, rather than leading ones (contrary to the IMDb summary for this film). Indeed she won the Best Supporting Actress Oscar in 1952 for her very brief role in The Bad and the Beautiful. Her film career waned – though never stopped – following what was perceived as miscasting in Oklahoma: audiences and critics were too used to her as a “femme fatale” for a “wholesome” role, and she had a real-life reputation to match. As film roles became more difficult to find, especially as Grahame reached her fifties, she took parts in theatre, sometimes in the UK… And that’s where Film Stars Don’t Die in Liverpool finds her. Despite that fabulous background, I have to confess I’d not heard of Gloria Grahame until I was looking at matinees on offer at my local Odeon recently. I looked into it just a little bit first. When I read things like, “Passion and lust for life are tested to the limits by events beyond their control,” I knew I was in for a tear-jerker. That isn’t normally my style, but I’ve never seen Annette Bening do a poor job, so I gave it a shot and came out extremely impressed, with my tears properly jerked. The film is essentially a tragedy, following a relationship from its formation through its rapid maturity and turbulence to its heart-wrenching closure.

Annette Bening is far and away the star of Film Stars Don’t Die in Liverpool: from the start, she shows us a woman who is painfully aware of aging but trying to put off its effects. She is sensual, graceful, loves to dance and laugh; but sometimes it all catches up with her, and she anxiously asks her lover, “how do I look?” Her vulnerability and aversion to showing it are palpable, and I really do hope she gets the recognition she deserves one of these days.

And Jamie Bell makes her a fine match. He’s grown into an accomplished actor (though does have one scene to show off his dancing). His Peter Turner is understandably gobsmacked to be going out with a star, and once that initial shine has settled down, you can see he adores and cares for every inch of her. (I almost struggle to believe he was also The Thing in  Fantastic Four!) Grahame did keep a good deal of her inner workings to herself, and Bell played Turner’s reactions to that beautifully; the frustrations, as well as the chemistry between the two, were completely believable. 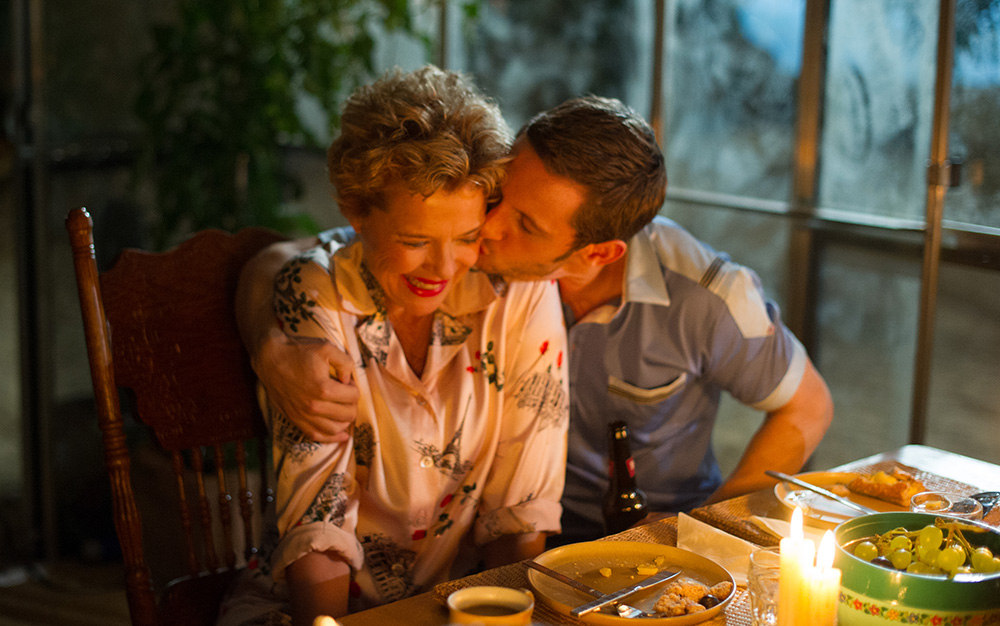 There’s something I’ve not mentioned about the couple at the heart of Film Stars Don’t Die in Liverpool, but you may have worked it out from the cast: there was an age gap of nearly thirty years between Grahame and Turner. Interestingly, though, in the film, this is hardly mentioned at all (acceptance of the relationship, in general, was quite refreshing), except by Grahame’s own family members. It’s almost worth watching for that cracking scene alone, in which Vanessa Redgrave plays Gloria Grahame’s mother and Frances Barber her truly bitchy sister.

Talking of family, let me not forget the supporting cast that made up Turner’s family. Julie Walters and Kenneth Cranham played his parents, and Stephen Graham and Joey Betey his brothers; and as a family unit, they worked very well together. Walters has played so many wives or mothers that, you know, yes, of course, that’s who she is. And even though  I love Hellraiser, Cranham is still very much Farder Coram from the BBC’s adaptation of Northern Lights to me; a similar subtle patriarch. So the personalities worked.

What didn’t work so well, unfortunately, were their costumes: his cardigan and her apron, etc. came right out of a dressing up box marked “working class”. Some of Gloria Grahame’s outfits had the same stereotype feel about them, too, but not quite as much. There was a similar issue with the set design, too: exaggerated 70s wallpaper and New York glamour, for example, so you could tell at a glance where the story had taken you.

The soundtrack is also used to reinforce the time, place and mood; quite effectively most of the time, with Dusty Springfield or British post-punk tunes as appropriate. But then a modern tune is slipped in and spoils all that. Elvis Costello wrote an original song entitled “You Shouldn’t Look at Me That Way” specifically for the film; he’s a perfectly good songwriter, but that doesn’t mean it fits the rest of the soundtrack’s style. Considering Film Stars Don’t Die in Liverpool looks back on their relationship from its conclusion, encompassing a series of flashbacks and zigzagging between periods one to two years apart, the structure isn’t at all confusing. Sometimes the transition between one period and another simply involved Peter turning around and seeing the room from a different perspective, which opened a new scene. Especially neat was when a pivotal scene was viewed again from the other character’s perspective, in order that a question of motivation could be resolved. The pacing was spot on, allowing us to feel the ups and downs smoothly without being yanked from one to another. Granted the film wasn’t long enough to give us any details (such as how living together in New York worked for them), but any longer would have made it duller. And the film was about the broad strokes of their story: plot details were carefully applied when necessary to support that.

Yes, I described it as a tragedy earlier, and it was: almost Shakespearean in its simplicity of cast and plot, but without any moral message or propaganda. It’s simply a love story, and if it has anything to tell us, it is that anyone can feel lonely.