Ghost Stories is a British anthology horror film with an overarching story about a supernatural skeptic. Written and directed by Jeremy Dyson and Andy Nyman (based on their play of the same name), and starring Andy Nyman, Martin Freeman, Paul Whitehouse and Alex Lawther.

In Ghost Stories, Andy Nyman plays Professor Goodman, a professional skeptic and TV debunker of supernatural phenomena. A hero of his in the field challenges him to work out rational solutions in three particular cases of spooky visitations; and as he investigates, we are presented with three stories by their respective protagonists. We have Paul Whitehouse as a night watchman at a former asylum, being creeped out by noises and lights; Alex Lawther as a nervous teenager who “borrowed” his Dad’s car and runs into trouble in the middle of nowhere; and Martin Freeman as a banker who spends a night alone while his wife is in hospital with pregnancy concerns. Throughout and between these stories, Goodman attempts to piece together an explanation for each of them, while facing some troubling memories of his own that those stories bring back to him.

Ghost Stories is essentially a tribute or homage to classic anthology (or portmanteau) films such as The Vault of Horror, Dead of Night, etc. It is not a spoof or pastiche of such films, though there are many, many elements you’ll have seen before; rather, the writers cherish their tropes and present them with affection. That affection doesn’t soften the film, though. It is very, very creepy in parts (though not exactly scary, in my opinion), like the best Twilight Zone episodes.

The direction isn’t entirely consistent; starting smooth and confident, then jerking from one scene/subject to the next, and then back to confident, etc. However, I’ve yet to figure out whether perhaps that inconsistency was deliberate or even correct for this film. Perhaps it makes good sense, looking back. Not every film needs to be comfortable to watch, after all. The direction within each of the individual stories works great, mind you – in my mind, especially the first two, which include mounting tension like the best Tales of the Unexpected – but it’s the linking arc that doesn’t flow quite so well. 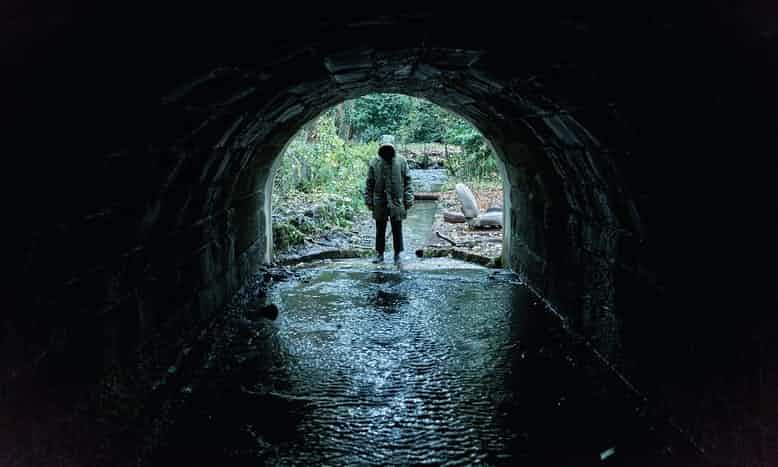 Alex Lawther was far and away the best actor on screen: turning up to eleven the anxiety he wore so comfortably in The End of the F***ing World, but with real expression, not a caricature in the slightest. Paul Whitehouse, too, was a revelation; playing a serious part, but at ease with it. The only snag was that his voice was so familiar that it took me right back to The Fast Show. Andy Nyman and Martin Freeman were not quite as good in my opinion (less skilled or hammier, I couldn’t tell which), but the quality of the writing more than compensated. Yes, I know these are generally names known for comedy; but some of their best comedy has been tinged with wit and black humor. The familiar faces might make you comfortable watching Ghost Studies, but you won’t stay comfortable.

And yes, I’ve noticed: these are all male names. In some other films about men, I might object to the minimizing of women, but the male perspective makes good sense here, as I’m sure you’ll see too by the end. Professor Goodman is asked to look into three cases, and it happens that they have all been raised by men, and he brings his perspective to them too. But unlike Game Over, Man!, for example, there is hardly any bullish posturing or macho bullshit here: Ghost Stories is about masculine vulnerability, and the exposure of talking about yourself, appearing like an idiot and being yourself. It feels almost like reading someone’s journal, the tone of the writing is so insightful.

The production is quite lovely too; sparse and careful set design in parts (such as a single gun cabinet on a hillside), and zoomed in to a panicking face in others as appropriate. This all added to an increasingly surreal and dreamlike atmosphere, which draws the viewer along without knowing where they are going.  One or two scenes even brought me back to my old favorite, Sapphire and Steel. The score reinforced that too: sinister and appropriately atmospheric, staying just this side of cliched, like perfect emotional manipulation. Don’t forget, the brain sees what it wants to see.

If you have any fondness for British cinema or writing, whether old or new, do go and see Ghost Stories. Try not to read much more than this beforehand; and when you tell your friends about it the next day, try not to give away its secrets.