“Old bastard’s only gone and died,” says the lugubrious Patrick Melrose after receiving some bad news from New York in the first episode to be adapted from the autobiographical novels of Edward St Aubyn by David Nicholls. He’s talking about his father, an abusive monster played by Hugo Weaving, who made Patrick’s life a nightmare, and is a big part of the reason why, during the two days in 1982 when the first episode takes place, Patrick takes heroin, amphetamines, Quaaludes, valium and copious amounts of alcohol, tries but fails to kill himself, and then almost forgets to take his father’s ashes home.

We meet Patrick as he answers a phone, an old one, one of those with the curly wires and an echo on the line. It’s the first clue that Patrick Melrose takes place in the 80s; another is the fact that everyone smokes inside. And we know that Patrick himself, played perhaps unsurprisingly by Benedict Cumberbatch, is a toff. You can tell by his deep aristocratic voice. The tell-tale blood spot on his shirt is a clue, too, although the fact he sinks to the floor in search of a missing syringe is a better one. Patrick Melrose, for all his money and Tennyson quotes, is an addict. 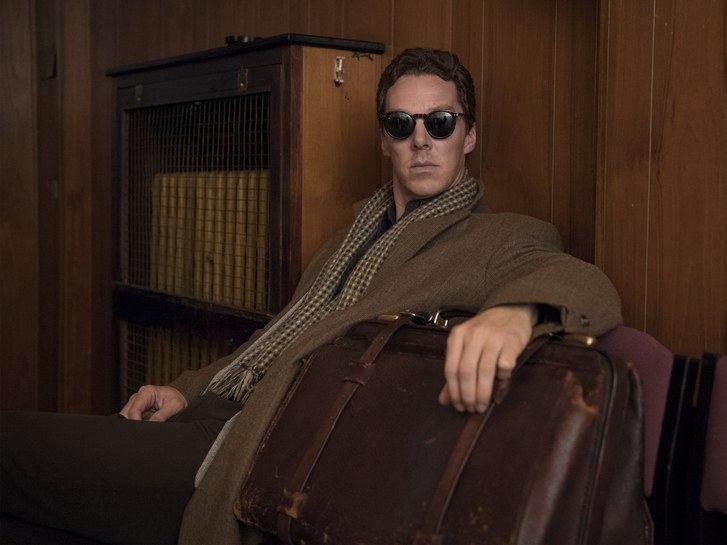 He tells one of the women in his life that he’s giving up drugs, but after receiving that bad news and jetting Stateside, he takes lots of drugs anyway. The two days he spends there are fraught with misadventures as he charges about the streets and hotels and restaurants of the Big Apple, having tightly-written arguments with himself and snorting and injecting and swallowing whatever he can find.

This – the character, the idea, the show – should be intolerable. I can’t, after all, think of anything that appeals to me less than the self-destructive escapades of a champagne-soaked upper-class hoity-toity toff throwing money at orderlies. But Patrick Melrose is fantastic; witty, thoughtful, and thanks to occasional flashbacks to the title character’s miserable childhood, sometimes quite poignant and distressing, too. Cumberbatch, who has apparently wanted to play the role for a long time, delivers here one of the best portraits of addiction I’ve seen in recent memory. He becomes, at least for an hour, Patrick Melrose. And so do we.

Consider one of many wonderful scenes in “Bad News”, that first episode, in which Patrick sits down for a drink with a woman who witnessed some of his tragic childhood. During the conversation, the Quaaludes Patrick took earlier kick in, and everything slows down. His body stops working; his face slackens. The camera follows him, laboriously, as he clings to the walls, dragging himself along in a way that is reminiscent of Leonardo DiCaprio’s trip on the same drug. In a bathroom, he takes a line of speed. Then he’s back – wired, sped-up, the camera on the return journey struggling to keep up. It’s masterful.

This is partly thanks to Edward Berger’s direction, but it’s mostly thanks to Cumberbatch. It’s a showy performance, no doubt, but also one that shows a distinct understanding of the character; one that commands you to look, to feel, to laugh, to do, basically, whatever it is he commands of the audience. Nicholls has condensed five novels into five hours. If this first one is bad news, I can only hope that Patrick Melrose receives plenty more of it.