Sara’s Notebook tells the story of Laura Alonso, a Spanish lawyer haunted by the sudden disappearance of her sister Sara. Laura discovers a photo of her sister seemingly alive and well in the middle of the Congo jungle almost 2 years after her initial disappearance. It becomes Lauras only desire to travel to the Ruthless Congo, stopping at nothing to be reunited with her sister.

Sara’s Notebook tells the story of Laura Alonso, a Spanish lawyer haunted by the sudden disappearance of her sister Sara. Laura discovers a photo of her sister seemingly alive and well in the middle of the Congo jungle almost 2 years after her initial disappearance. It becomes Lauras only desire to travel to the Ruthless Congo, stopping at nothing to be reunited with her sister.

Sara’s Notebook is remarkable throughout, raising important questions of morality and exposing the true fickleness of mortality. Following Laura, we are taken on a journey of courage and endurance as she tackles ambushes, shootouts and an abundance of chaotic violence. Laura begins her story completely open and ready to face whatever may come her way in the unpredictable and unforgiving Congo. Little does she know what is in store for her. When confronted with child kidnappings, village raids and the world of child soldiers, Laura soon comes to realize how futile her mission may become.

Sara’s Notebook, although a story of family and the fight for survival and rescue, it serves to demonstrate some of the darker sides of humanity. Laura is exposed to the violence and commonplace brutality of one of Africa’s most merciless lands. Plagued by turmoil, we can see that death becomes a familiar concept; bodies around every corner and an indifference to homicide lends for an awakening and stirring watch. Laura adapts quickly to defend herself and the company she keeps, leaving viewers at the edge of their seat in eager fascination and tension.

Directed by Norberto López Amado, Sara’s Notebook evidently shows the characteristics of sophisticated and yet completely worldly talent. López Amado, known previously for directing La decisión de Julia, has proven once again that he is no coward when it comes to engaging with complicated and sensitive societal topics. No stranger to complete transparency and true representation, López Amado should be commended for the beautiful ruggedness in the cinematography, challenging the audience not to look away from the reality of cruelty in power.

In Sara’s Notebook the audience are also given an almost tunnel-like vision of the events that unfold, following Laura alone we are forced to stay exactly how she is, see what she sees, and in turn, are treated to a more captivating watch. This being said, although exciting in sequence, the frequency of action spectaculars becomes a little too systematic. The timing of ambushes and near misses becomes absurd and almost farcical in retrospect. Unpredictable sure, but when another one of these sequences begins there is almost a feeling of promised resolution, feeling safe in the knowledge that they’ll probably be fine this time, too. Unfortunately, this leads to feelings of complacency, lacking in authentic engagement in places throughout Sara’s Notebook. 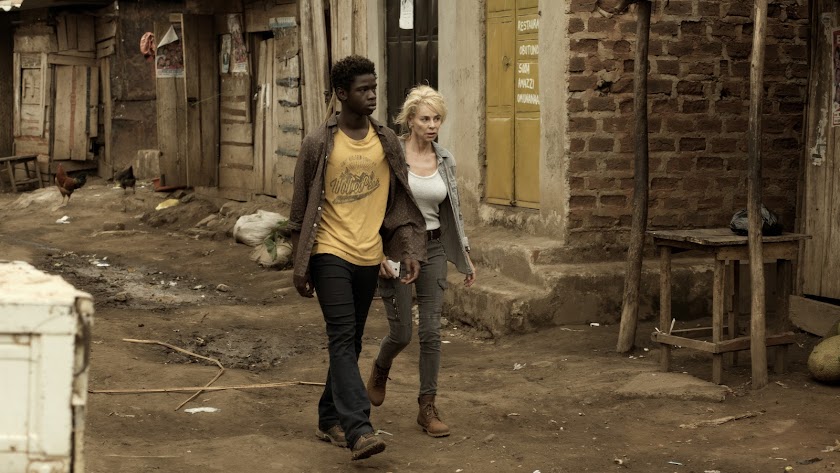 Sara’s Notebook is certainly gifted with a talented cast. Laura is played by Belén Rueda. Rueda brings a keen sense of naivety to the screen; this is not a case of a western woman suddenly becoming completely at home in the Congo. Laura goes on a fascinating journey as she learns what it means to survive and Rueda does marvellous justice to the character’s plight. I cannot go without mentioning new talent Iván Mendes; he delivers a passionate Jamir, a character who offers to help Laura throughout her mission as she tries to navigate the perilous Congo. Mendes and Rueda work harmoniously together to illustrate a heartwarming relationship based on nothing but trust.

Overall Sara’s Notebook is supposed to be a story of siblings and family, but it’s hard not to focus on the more pressing issues raised. The main plot of Sara’s Notebook may actually be the weakest feature, with shallow inspiration and faltering consistency; the audience loses interest quickly in Laura’s final goal. Instead, this is redeemed completely by the more pressing matter of personal survival and Laura’s forefront intention to help protect the people who so selflessly help her cause. An enthralling watch, Sara’s Notebook offers a look into the darker side of human nature and the more human reactions of those trying to survive it.

His House review - a horror heavily thematic on modern immigration

When My Love Blooms episode 10 recap and breakdown