In “Tainted Glass”, Marvel’s Cloak & Dagger takes a brief detour into the minds and backstories of its heroes in a surreal, spiritual episode.

In “Tainted Glass”, Marvel’s Cloak & Dagger takes a brief detour into the minds and backstories of its heroes in a surreal, spiritual episode.

Hold on a minute, Marvel, I thought we were finished with Legion? What’s all this? Alternate realities, shared journeys of self-discovery, spiritual cleansing rituals? I thought I was watching Marvel’s Cloak & Dagger. Now it looks as though the “Stained Glass” of the episode title might be the stained glass of the writer’s bong.

Not to worry. We’re still early in the first season and I like these characters, so I can forgive a bit of narrative water-treading in service of peering into our heroes’ minds and backstories. Besides, the first two episodes were pacey enough that they didn’t really leave much room for insight.

Speaking of which, in “Stained Glass” we pick up right where we left off, with Tyrone teleporting himself into the path of Tandy and almost steering the bullet meant for Officer Connors right into her pretty little head. You’ll recall that the first time these two met, Tandy lifted Tyrone’s wallet. After the errant bullet crashes Tandy’s getaway car, leaving her with a concussion, I’d say they’re just about even.

Marvel’s Cloak & Dagger, named after these two, obviously has plans for their relationship. But it doesn’t seem keen on revealing them any time soon, content, for now, to bring them briefly together and then yank them quickly apart. Tandy leaves Tyrone, a black kid, holding a gun on a dark road outside New Orleans. If the show were any more realistic, he probably wouldn’t make it to episode four.

Luckily, at this early stage, we don’t need the two characters to share too many scenes, especially not when “Tainted Glass” devotes its entire runtime to each of their respective worlds. There’s overlap and intimacy in their visions, Tandy’s spurred on by her bumped head and Tyrone’s by a Vodun cleansing bath, and through them, they begin to understand each other and themselves. 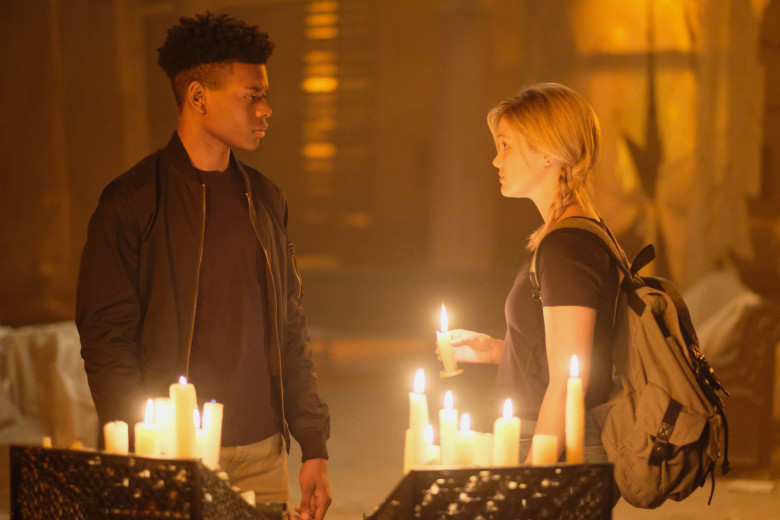 Marvel’s Cloak & Dagger presents voodoo as somewhat modular; one is able to take the parts of it they like, and apply them as necessary to their existing worldview or belief system. That seems uncommonly reasonable, but what do I know? Certainly that Tyrone isn’t well-suited to the spiritual trip, his intense survivor’s guilt forcing him to reject gifts of which he deems himself unworthy, and repeatedly veer down the same hopeless, self-destructive path.

Tandy intervenes, using her dagger of light to illuminate Tyrone’s dark and vengeful fantasies. Eventually, he repays the favor, wrapping her in his magic teleportation cloak to spirit Tandy away from an endless cycle of watching her father suffer under torture. I don’t expect the heroes’ “superpowers” to continue being metaphorical salves for each other’s neuroses, but I wasn’t opposed to that idea in “Tainted Glass”, well-executed as it was.

Besides, it’s pretty much the essential point that underpins their dynamic; Tandy is the poisoner, and Tyrone is the poisoned. Curse and cursed. Their cameos in each other’s life stories give them a richer understanding of each other, but also of themselves, particularly their perceived flaws and the tragedies they feel they must atone for. Afterward, they have some sense of the key to all emotional healing – that it isn’t their fault. That they’re deserving, however temporarily, of justice, of love, of a just reward for their good choices rather than an eternal penance for their bad ones.

Real life might have other ideas, but then again it always does. Tyrone and Tandy’s emotional growth isn’t reinforced by positive changes in their circumstances, at least not ones that’ll really take. Self-serving institutions blighted by classism, racism, and corruption continue to form the towering nemeses of Marvel’s Cloak & Dagger, and “Tainted Glass” shows that doing the right thing, such as you can, and putting your faith in the right place, isn’t always enough. The walls are so thick that whoever’s inside can’t hear you flail against them.

Even on a local, cultural level, Tyrone’s faith in Evita, and her faith in her Auntie Clarisse’s mystical Voodoo bath, might be misguided. By the end, we see a 3D-printed effigy of Tyrone placed on Clarisse’s mantel. I can’t say I know much about such things, but if Monkey Island 2 and that one season of American Horror Story taught me anything, it’s that having a simulacrum of you floating around is never, ever a good thing.