The Chalet is a six-part French mystery thriller in which a group of friends and acquaintances are trapped in a rural holiday home, with an apparent serial killer in their midst. It’s about revenge, conspiracies and the past not letting go. Sound familiar?

The Chalet is a six-part French mystery thriller in which a group of friends and acquaintances are trapped in a rural holiday home, with an apparent serial killer in their midst. It’s about revenge, conspiracies and the past not letting go. Sound familiar?

I’m sure you’ve all noticed that Netflix is getting hold of more and more films and TV shows from around the world in recent months; much of it is great for their reputation and great for expanding the horizons of its viewers. Not The Chalet, I’m afraid.

I loved Money Heist, and my hubby and I were jointly smitten with Dark, so I was very content to try the latest foreign language drama that Netflix recommend to me. Yet if it wasn’t for the fact that I had planned to write about the show, I would honestly have given up halfway through episode two.

The scenario is this: Manu (Marc Ruchmann) and Adele (Emilie de Preissac) are getting married, and they invite a bunch of old friends to stay with them prior to the wedding at a chalet on the edge of Manu’s hometown, Valmoline. The chalet has been renovated in recent years, essentially for hiking groups, though that may have come a little too late for the local economy; people have been moving away, and Valmoline’s population is dwindling. Just as the wedding party crosses the picturesque old bridge to the little town, the bridge collapses behind them, leaving them trapped until the bridge can be repaired (there is no other way into the town). Gradually, people in the party go missing, get injured or die, leading to distrust, suspicion and conspiracy theories.

At the same time, via a sequence of occasional flashbacks, we see some of what went on in the village twenty years earlier. The two timelines are clearly connected (they share some of the main characters), though the nature of that connection is revealed gradually. So the story is essentially a mild slasher; the mystery is what happened twenty years ago that laid the foundations for this killing spree.

Unfortunately, it’s not a great mystery: there are so many characters, and as there’s not a lot to distinguish many of them I’m not really bothered about who’s carrying out the cull. If anything, it’s more entertaining to see how the next one is going to die: a fall, crossbow, shooting, bear trap (I know, in the Alps?), freezing, or maybe just disappear. When we do find out who’s doing it, whatever, it’s no great surprise. And the why is just laughable. 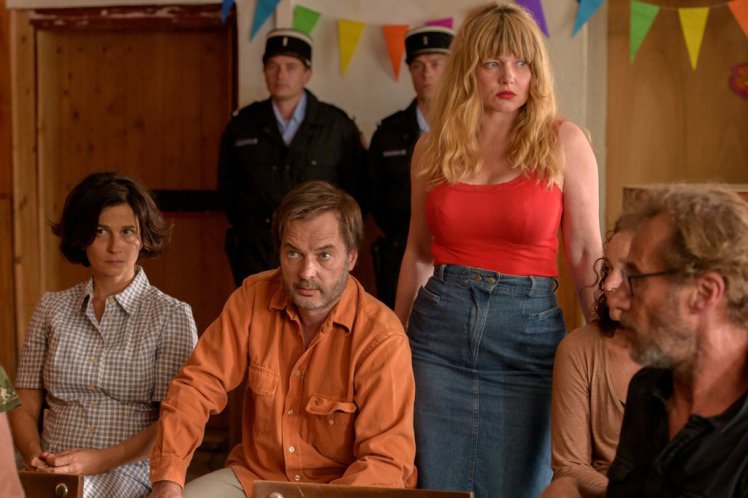 The acting isn’t bad… at least for soap opera standard. (I might not have seen it that way, to be honest, except the filming and production quality was about the same as Emmerdale.) The death scenes were dire, though: the actors all seemed to fall as though they were trying not to hurt themselves.

Half of the characters were nondescript, or people you “love to hate”; nearly all of them were two dimensional or morally dubious: the frustrated writer who has a brief affair and then dismisses his mistress; the adolescent who humiliates his bullies; the man who asks his son to keep watch, while he goes inside to murder a couple, etc.

A couple of the characters were interesting; the same two that had – in my opinion – the best actors. The first was Alice (Agnès Delachair), Manu’s best friend since childhood; she was ballsy (as both adult and adolescent) and had a pivotal role linking the characters of both timelines. The other was Sébastian (Nicolas Gob), bigot and bully; more intelligent than anyone gives him credit for. But overall, as I’ve mentioned already, there were too many characters. I still haven’t been able to identify who one of the victims was! If there were a third fewer people, the series could have been two episodes shorter and perhaps more tightly written.

The best things about The Chalet were the creepy opening sequence (a child’s sing-song voice over a model village) and the scenery, but both music and scenery were sorely underused. There were no landscape views like Top of the Lake treated us to, and even the forest was given little attention.

Considering what great cinema has been known to come out of France, The Chalet was a very disappointing introduction to French TV. I am not looking forward to a second series. And if you would be interested in a drama with multiple timelines that’s done really, really well, watch Dark on Netflix: that one had lots of characters too, but they were all interesting and distinct, and I grew to care about many of them, very quickly. In contrast, I plan to forget about The Chalet, now that this article is finished.