A prequel to The Purge (and its two successors), The First Purge is a horror/thriller about a social political experiment: in Staten Island, the rule of law is lifted for a period of twelve hours. On the surface, this is to relieve tension and anger; but underneath, there is an agenda.

A prequel to The Purge (and its two successors), The First Purge is a horror/thriller about a social political experiment: in Staten Island, the rule of law is lifted for a period of twelve hours. On the surface, this is to relieve tension and anger; but underneath, there is an agenda.


The Purge was a home invasion story; the sequels brought the same scenario into the streets and into politics. The First Purge presents the proof of concept for what became an annual institution in this near-future America. Over about twenty-four hours, we see the preparations amongst the organizers, local residents signing up and/or protesting; we see the “purge night” itself (both in the locality in question and in the control rooms) and the press conference afterward. This film is removed from the original in the same way as Seoul Station was from Train to Busan: background to the concept, rather than the origin of the characters, though focusing on a couple of families and gang-based subplots.

As a thriller, The First Purge is indeed exciting; and I developed some attachment to the characters pretty quickly. As a satire, it is a little clumsy and unsubtle, though still thought-provoking. 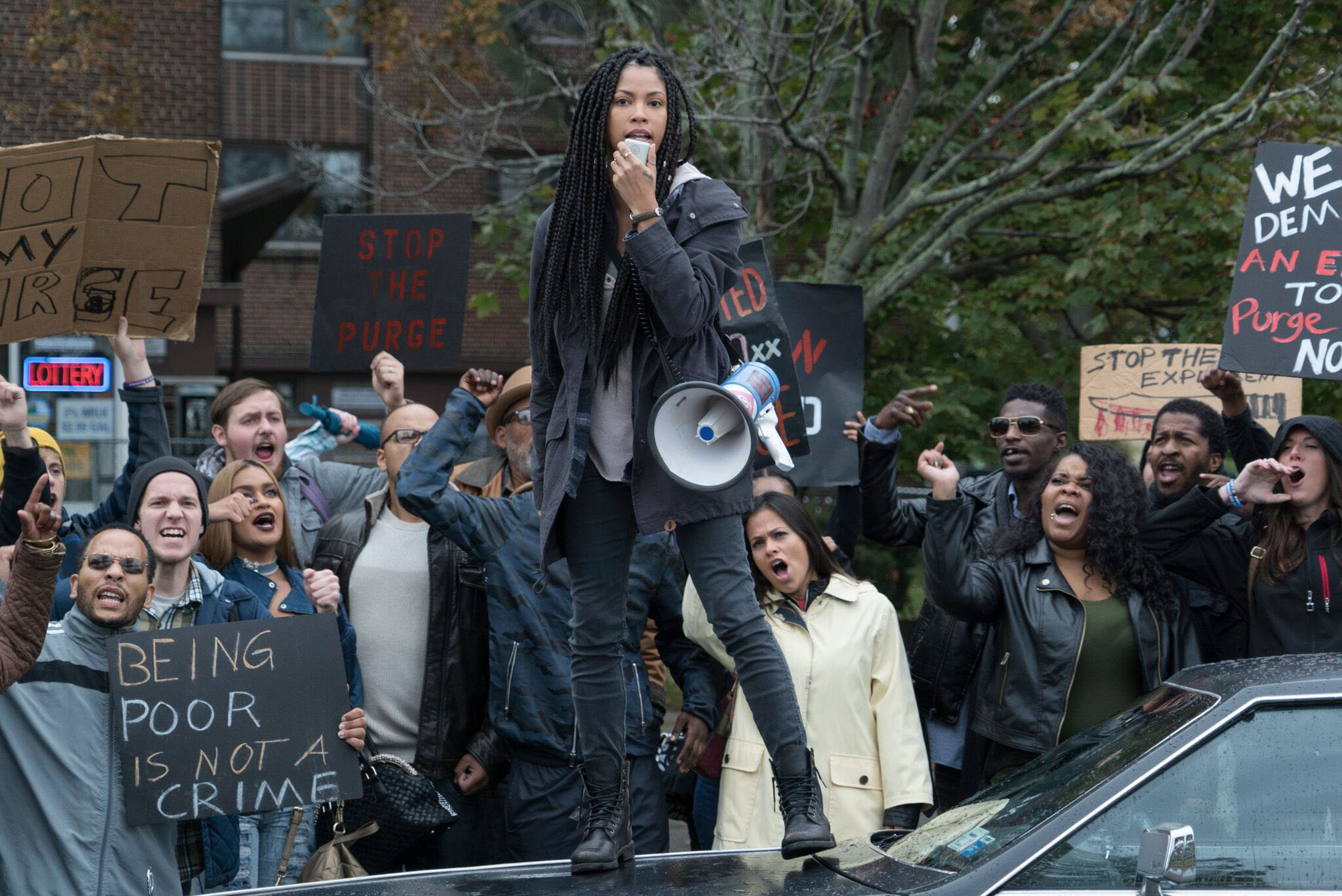 Marisa Tomei is the architect of the experiment, with a psychological angle on the outcome: she wants to understand why people react the way they do to the freedom they are given and is startled when things do not go as she predicted. On the other hand, she also neglected to think about how the experiment might be used as a social engineering tool by her political sponsors. Patch Darragh plays the New Founding Fathers of America Chief of Staff who does just that. Both play their parts smoothly, only slightly hammy villains; and they are the only major characters who are white.

The experiment of The First Purge – twelve hours in which crimes and weapons are legalized – takes place in Staten Island. People are given the opportunity to leave (in advance), and those who choose to stay are given the opportunity to “participate” with financial incentives. This locality is presented as an area in which virtually all residents are non-white (mostly black), most residents are of low income, and therefore have some anger to vent; and in this film, those who are not of low income are gangsters or drug dealers. I cannot comment on the truth of this demographic picture, but it came across as a standard set of modern urban stereotypes: broad brush and somewhat lazy.

The acting and the character writing in the street/residential view of the film was really rather good though. The focus moves between a pair of siblings – activist older sister (Lex Scott Davis) and unsettled teen brother (Joivan Wade) – and their overlapping circles with the church, bullies, friends and corrupting influence ex-boyfriend. This ex (Y’lan Noel) was the street gang leader, and he had associates, rivals and respected acquaintances that added to the cast. There were not too many to follow at all, though; overall, the characters were well drawn and arranged in such a way that they established a community. (Less believable was Noel’s character turning into a John Blane towards the end, but never mind.) 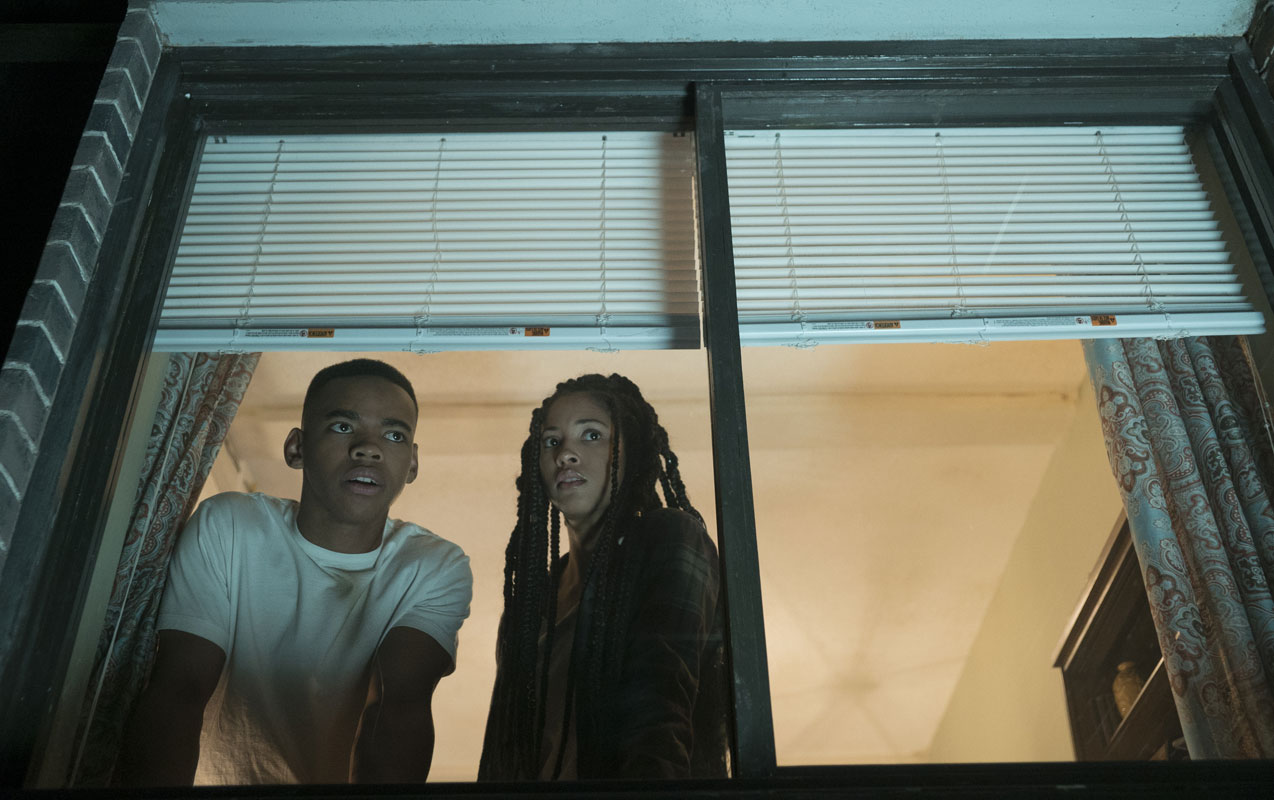 The First Purge is very clearly a social/political satire about the way BME communities are treated by those in power (represented specifically by two white people in the film). You could be forgiven for saying it is sitting in the same territory as Get Out: but Get Out was written by a much more skillful satirist. The First Purge, on the other hand, was written by a skillful storyteller, who has developed a full mythos for his story: James DeMonaco, who wrote and directed the earlier films in the series (though Gerard McMurray directed on this occasion).

I cannot say whether DeMonaco is using the medium of violent thrillers to make political points, or taking advantage of social consciousness to generate interest in his thriller. I suspect the latter: I do think a little more care would have been taken over stereotypes (not to mention presenting drug gangs as heroes) if the writer was clearer about his message. But the message is certainly clear (or heavy-handed?) enough for some viewers to have described The First Purge as “left-wing propaganda”. 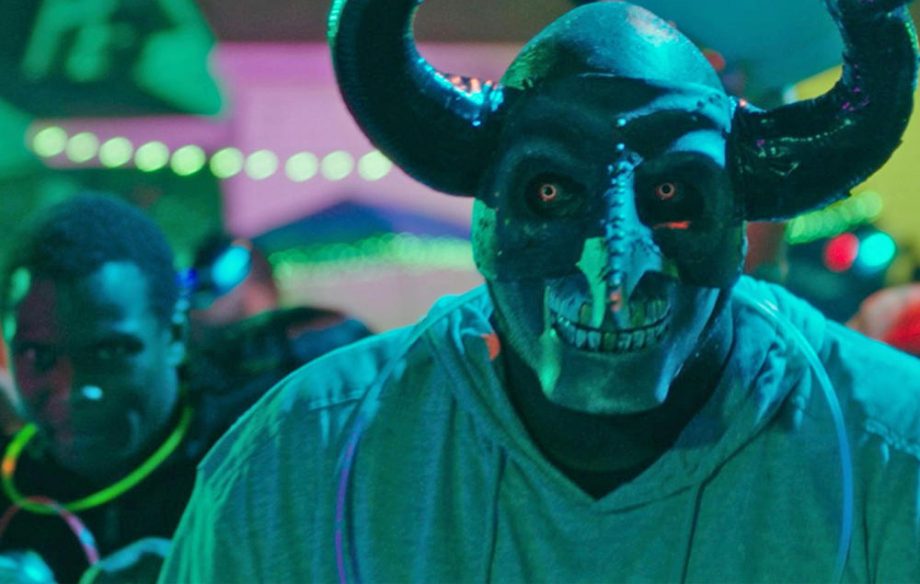 The direction is excellent; especially the increase in pace, and the action sequences. There is a palpable sense of residents feeling trapped – in their homes, on the Island, and in their class – a feeling shucked off by those who choose to party instead of attack. Those who do attack are both scary and unpredictable, due not just to the masks, but to the variety of different people and styles involved. There is a great use of light and neon in dark places – both cheerful and intimidating – as well as fire and noise. The viewer is kept in the same tension as the residents who do not want to play along.

It is an exciting film! And that’s the way to enjoy it: an action thriller with characters you can feel for and a plot that works. It clearly belongs with the other Purge films, but could just as easily be viewed and enjoyed as a piece of speculative fiction in its own right. But don’t look too closely at The First Purge for a social message; at a glance, you can see what the writer is demonstrating, but I don’t think it would hold up to detailed scrutiny.