“Which Side Are You On?” was a masterful episode of television and an undeniable high-water mark for HBO’s rich-family drama.

“Which Side Are You On?” was a masterful episode of television and an undeniable high-water mark for HBO’s rich-family drama.

This title of this week’s episode of Succession asks which side are you on. But it’s a trick question. Everyone’s on the same side: Their own. As Kendall scurries around trying to drum up support for his planned vote of no confidence at the next Waystar-Royco board meeting, he visits his smug, coked-up rich guy buddy for a guarantee that he’ll be on-side with Team Future. “I can promise you,” he says, “I am spiritually, and emotionally, and ethically, and morally behind whoever wins.”

We’ll get to who wins in a moment. Before that, though, we should consider just how neatly that one line encapsulates every major character in Succession. Any screenwriting class in any corner of the globe would tell you that such a fact is somehow wrong; that the principle cast shouldn’t ever be possessed of the same values, personality traits, and flaws. You’ll be told how every story needs a relatable figure, someone for the audience to get behind and identify with. That person doesn’t exist in Succession. Nobody is likeable or relatable. It shouldn’t work. And yet – particularly in “Which Side Are You On?” – it not only works, but works spectacularly well.

Why is that? You could point at the quality of the screenwriting or the acting, and you’d be half right, but the real reason is that the focus on the Roy clan is a trick. The show isn’t really about them; it’s about the ostensibly ordinary people on the periphery who get sucked into the whirlpool of their ambition. It’s about those people and their principles trying to come up for air. How do old-fashioned notions like honesty, loyalty, fairness and generosity survive in such an airless, oppressive environment? Can they?

“Which Side Are You On?” suggests that, in some way, they can. And the unlikely recipient of that karmic bounty is, of all people, Logan Roy himself; the richest, the least tolerant, the most privileged. Succession repositions him as a man not worthy of sympathy, but worthy of some begrudging respect. He is, after all, a man of principle. He sits atop a squirming nest of vipers, but he’s a different kind of predator, the kind that’ll look you in the eye and let you know it’s about to eat you. The outcome is the same, of course, but the flavour is different.

This is why the latter half of “Which Side Are You On?”, which concerned the long-awaited board meeting, was such a masterful half-hour of television. After watching Kendall and Roman schmooze their way around the city, laying their silver tongues on the shiniest shoes they could find, the audience had earned their seat at the boardroom table. We got to watch it all go wrong. Why else do you stack dominoes if not to eventually watch them tumble? 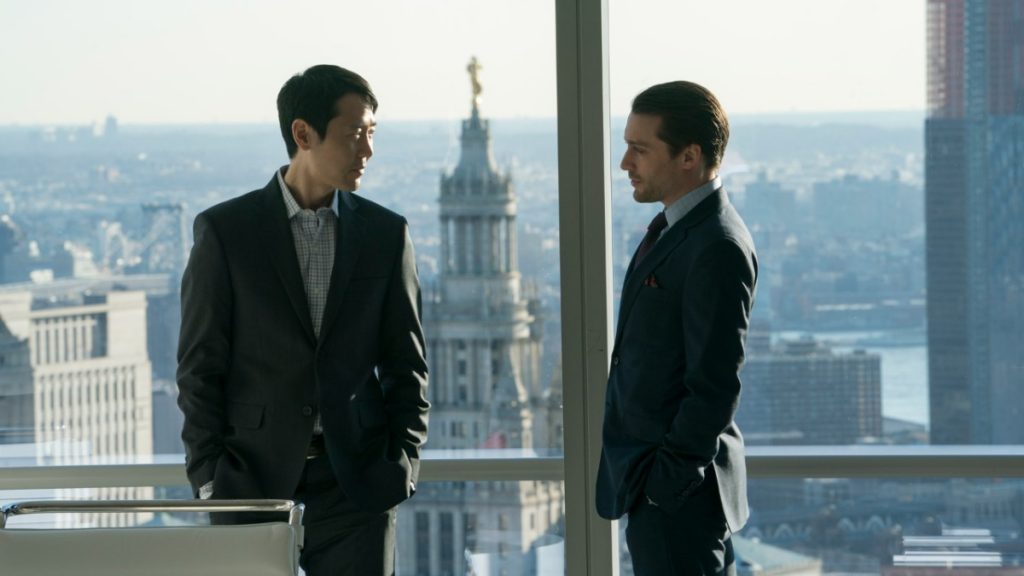 Kendall, stuck in traffic and unable to make the meeting on time thanks to a terrorist attack that he was, of course, glibly dismissive of, had to phone in and propose the vote of no confidence over the boardroom speaker. Without him present, nobody could hide behind him. Logan refused to leave or remain silent during the vote, constantly fixing people with his withering glare and berating them for their dishonesty and manipulation. Roman, having spent much of the episode convincing Lawrence (Rob Yang) that he was the big dog in the company, stayed true to his word by mostly whimpering at his master. Lawrence, to his credit, abstained from the vote.

It was comical, in a way, but also faintly tragic and fist-pumpingly cathartic. As the confidence of the board ebbed away, Logan drew it within himself, like a demon. He seemed to swell and darken, not as if from the illness that had led to the vote in the first place, but as though he was healing in real-time, becoming stronger and smarter and more terrifying. His voice deepened. He remained utterly unconcerned, no doubt because he already knew what “Which Side Are You On?” gradually revealed to be true: These people are cowards.

It was pathetic, really, to see Kendall and his usurpers so thoroughly and easily defeated. By the end of the episode, half the board had been fired. Ewan, Logan’s brother and historical enemy, voted in his favour. He couldn’t stand the betrayal.

That generation of Logan men are many things, but they’re not Judases. If only Greg was there to see his example, and not that of Tom, who had taken him out for the evening to “be rich” while his fiancé, Shiv, got her feet rubbed by an ex-boyfriend. When he woke up in the morning, the first thing on his mind was whether “it happened.” Turns out it did, but not in the way he was expecting. He might be the show’s comic relief, but he’s also the most parasitic pretender of them all. Any sympathy he might have garnered from being constantly emasculated and manipulated by Shiv went the way of the deep-fried songbird that he eagerly gobbled the previous evening. Chewed up, swallowed, forgotten about. Good riddance.

“Which Side Are You On?” ended with Logan receiving an apologetic call from the President as Kendall roamed the streets, lost and, suddenly, as much of a loser as the ordinary folks he has spent his life berating and ridiculing. Welcome to our world. Better luck next time.

“Which Side Are You On?” was the sixth episode of Succession’s first season. Check out our complete series coverage.