Netflix Original Film How It Ends provides an uneventful and subdued apocalyptic event movie that fails to excite.

Netflix Original Film How It Ends provides an uneventful and subdued apocalyptic event movie that fails to excite.


How It Ends suspiciously markets itself like it is Netflix’s next baby, with a title that hints at an apocalypse and a film poster that has all the elements of a significant action blockbuster. Coupled with the contributing factor that Netflix authorized the production, you can almost sense that their latest Original Film was primed to be the next marketable winner. David Ayer’s Bright was the streaming giant’s recent attempt to elevate itself to the same respectable level as a cinema experience, where the routine blockbuster film becomes more of an event than a place of storytelling. I mean, Bright was terrible, but the stake was unduly made.

Netflix Original How It Ends does not feel like an event as the marketing suggested. In fact, the apocalypse movie is rather grim, uneventful and slightly subdued. You never really understand what type of apocalypse the characters are experiencing with certitude. How It Ends, in reality, is about a man trying to establish a relationship with his aggressive father-in-law.

The Netflix film opens with Will, a tired young-looking man (Theo James) agreeing with his wife Samantha (Kat Graham) to attend a dinner with her dad, Tom (Forest Whitaker). The dinner becomes a battle of masculinity, which is even more straining because Will is not allowed to reveal that Samantha is pregnant. Of course, his wife is not at the dinner for the purpose of the film – Will just willingly attends dinners at his father-in-law’s house, despite the fact that they evidently hate each other. The next morning Samantha rings him, chasing him to catch his flight home, but then there is a weird disturbance and a look of worry from his wife. Panic sets in when they lose connection. The news station announces major power cuts and unprecedented earthquakes conveniently where Samantha is. This forces Will to go on a long road trip across the US with his father-in-law to return to his wife. 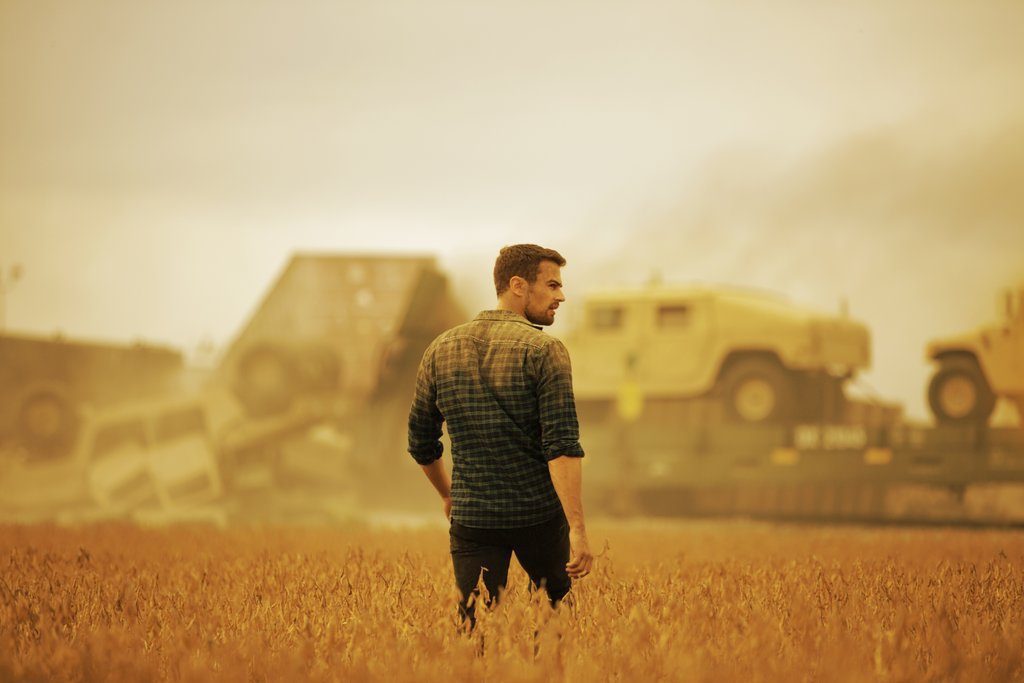 If you look at the poster for How It Ends it is clear that the objective was to sell the prestige in having Forest Whitaker for a labeled Netflix Original film. It features Theo James at the front of the poster, wearing a gas mask, and Mr. Whitaker transparently behind him, bearing the title “Academy Award Winner” under his name. Let’s be honest, Theo James possesses the unspeakable Divergent series in his filmography, so it is clear who the real leading character is. From the moment the film starts, everything you expect Forest Whitaker to do he does; you want to move in with Samantha? You have to deal with Forest Whitaker. You want a life lesson story? Forest Whitaker will give you one. You don’t know how to use or reload a gun? Forest Whitaker has done it in plenty of films, he will show you. How It Ends tries to sell this apocalyptic event but it really disguises two stubborn men trying to find common ground, with one of the men being Forest Whitaker. A proud man trying to encourage his son-in-law to be more like him whilst the world is ending.

Putting aside the leading star, How It Ends does give some account to what is happening during this apocalyptic event, with most of it based on people going mental because they have no idea what is going on. With electricity lacking in most areas, the public is understandably going crazy. There is a real comparison to be made with The Walking Dead as a matter of fact, with people removing themselves from the jurisdiction of the law and making their own rules. The undeniable truth is that the Netflix film does not really know how it actually ends. Some supporting characters provide theories before they lay out their intentions but there is zero certainty in the story. The movie does slot in some action that usually involves rebellious people, but the continuing vagueness surrounding the end of the world makes the entire movie feel random and uninviting. And without spoiling, the ending is absurdly uneventful, concluding so suddenly that I originally thought I was witnessing a momentary black screen.

Apparently How It Ends is an apocalypse movie. What I am certain of is that Forest Whitaker is in it – that’s abundantly clear.

Check out my youtube review of how it Ends