Jim Jefferies returns on Netflix with “This Is Me Now”


Jim Jefferies: This Is Me Now shows how far the Australian comedian has come in his hour-long new stand-up. His heightened fame has enhanced his look, making him look like a shiny rich coke addict rather than a shabby-looking drunk outside a run-down Wetherspoons. Jim Jefferies is the leftie we need, who is allergic to being sensitive and can conjure shocking jokes to his prepared audience.

I fondly remember his earlier shows when he was relatively new and his jokes made you wince from laughing. He reminds us of his origin in This Is Me Now, “I sold my first five specials for 90 thousand, which when you are poor sounds like a good idea”. Now he is appearing on late night popular TV, mocking Piers Morgan for his Trump support and telling him to well and truly “f**k off”. He isn’t afraid to be liberal and controversial at the same time, which is refreshing in the current social climate.

Whilst in This Is Me Now he is revelling in his fame, Jim Jefferies still has time to make an applaudable dig at Trump. He manages a 12-minute segment about the technique of ” p***y grabbing” which has confused his mind for months. To be fair, when he relayed his thought process behind “p***y grabbing” his logic was the keystone to the joke; Trump’s claim does not make sense. 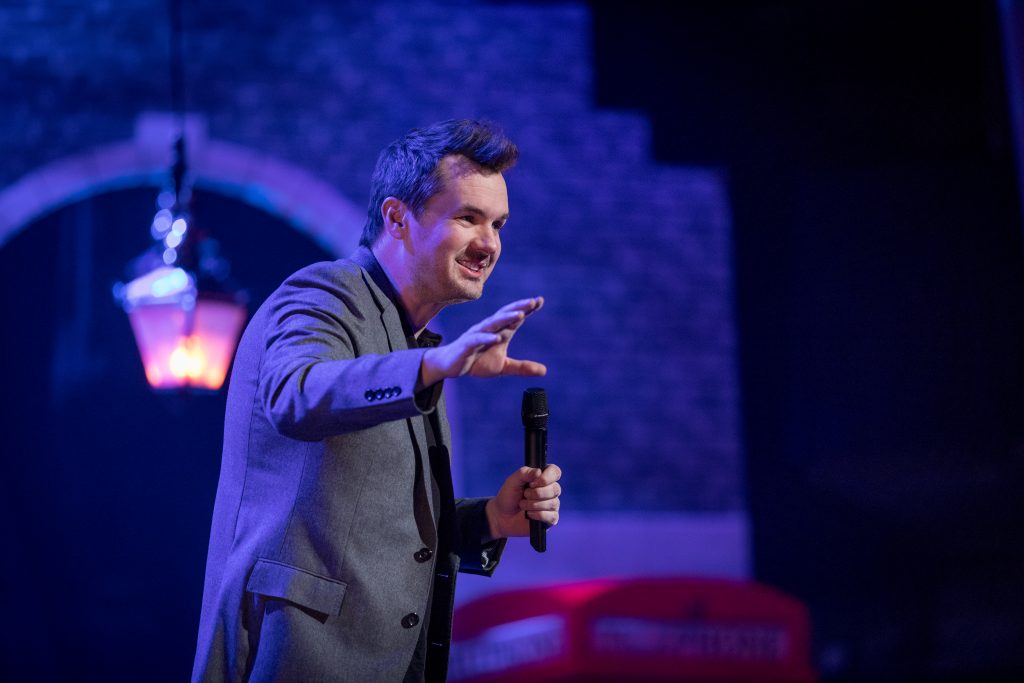 There is time for Brexit as well, although in This Is Me Now he cools it slightly with his British majority audience. “We should have a one in and one out system; we have a nurse going out and who do we have coming back in… Barry, who won a scratch card and decided to live abroad”. Jim Jefferies’ political hypocrisy shines through in This Is Me Now, whilst also reminding people how he got here in the first place; the gun control joke.

Jim Jefferies almost reminds me of Ricky Gervais, with his long purposeful stories, yet his adjustment to fame has been harder for him to reckon with. Whilst Gervais relished in mocking his rich equivalents, Jefferies discusses moments where he felt out of place, which is worth waiting for in his Mariah Carey story.

This Is Me Now shows Jim Jefferies for the first time in his life on stage since he has become A-listed. He hasn’t changed too much either, and he doesn’t need to. His stories still portray a normal man and his Australian wisdom continues to sting.