The Darkest Minds is yet another YA franchise-starter that plays like Frankenstein’s genre monster, given a sad political relevance by sheer coincidence.

The Darkest Minds is yet another YA franchise-starter that plays like Frankenstein’s genre monster, given a sad political relevance by sheer coincidence.

2018 might be both the best and worst year for yet another franchise-starting young-adult blockbuster. The worst, because, frankly, who needs any more of these things after we’ve already suffered through The Hunger Games and Divergent and The Maze Runner? But also the best, because The Darkest Minds features internment camps for ostracised children, giving it a strange timeliness in the era of so-called “tender age shelters”. Or, to give them their proper name, baby prisons.

The fun of these movies used to be in watching teenagers fix the world around them by discovering and learning to love who they were; no such luck in The Darkest Minds, though, which presents a dystopia that’s too reminiscent of the real-world future we’re fretting about to qualify as laidback escapism. It’s also rubbish.

In the opening scenes, we’re told of a youth-culling plague that has wiped out most of America’s kids. The ones who survived have developed various psychic abilities, helpfully colour-coded by a fearful government who have bundled them into camps for evaluation. Unimpressive types, like the super-smart greens, the matter-manipulating blues, and the electricity-throwing yellows, are left alive. But the dreaded oranges and reds are deemed too dangerous and are promptly executed. 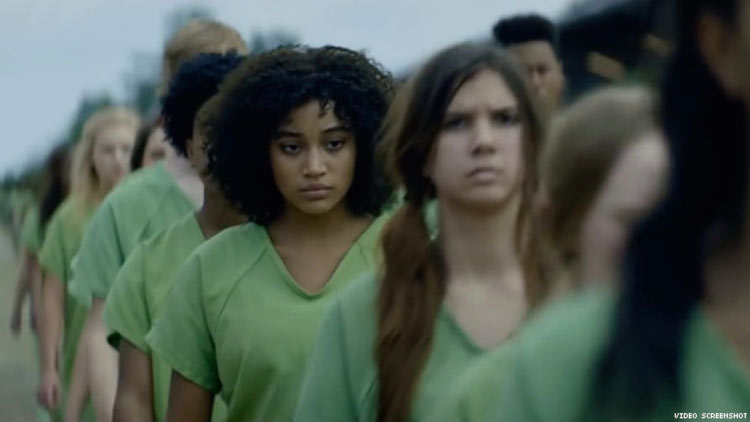 One such orange, Ruby Daly (Amandla Stenberg), is the heroine of The Darkest Minds, able to stave off execution thanks to her Jedi mind tricks and the ability to erase herself from people’s memories. (If you’re wondering if that’ll factor into the plot at some point, have a cookie.) Smuggled out of the camp by a sympathetic doctor, Cate (Mandy Moore), Ruby hooks up with some other runaways, Liam (Harris Dickinson), Charles (Skylan Brooks) and Suzume or “Zu” (Miya Cech), in the hope of discovering a promised land which, when they get there, very quickly reveals itself to be a haven of little more than terrible CGI.

As young-adult films of this type tend to, The Darkest Minds eventually treats the death and on-going extermination of children as secondary to the awkwardly inert relationship between Ruby and Liam. Jennifer Yuh Nelson’s direction is generally workmanlike, able to construct a decent action sequence here and there, but she does occasionally descend into almost laughable ineptitude. And the screenplay by Chad Hodge, working from Alexandra Bracken’s original novel, is often embarrassingly on-the-nose in its attempts at social critique, including the earnestly-delivered line, “We don’t segregate by colour here,” in description of that fabled, adult-free utopia.

The Darkest Minds is a melange of pilfered genre tropes bound together by occasionally inexplicable logic, its only interesting component a complete accident. Whereas young-adult fiction was, just a couple of years ago, the go-to lens through which to view generational fear, our rapidly declining social and political climate has rendered their viewpoint mostly obsolete. For all its fortuitous relevance, The Darkest Minds feels like a product of an era we’re rapidly accelerating away from.