Netflix Original Film The Package is about a teenager that chops off his own dick.

Netflix Original Film The Package is about a teenager that chops off his own dick.

The writers for Netflix Original Film The Package wanted to make sure that the word “dick” was spoken as many times as possible. I lost count at 10 – well, I gave up. When you watch a film that is centred around the word dick, you realise that some areas of the industry are running out of authentic ideas. The word lost meaning, and it was the only gag.

You are probably intrigued by why this Netflix film is obsessed with the word dick. Well, the premise follows a group of teenagers who decide to go camping; Donnie (Luke Spencer Roberts), Jeremy (Eduardo Franco) and Sean (Daniel Doheny) are joined on this trip by Sarah (Sadie Calvano) and Becky (Geraldine Viswanathan) to the disgust of Donnie, who wanted this to be a “lads” trip only. Whilst on this trip, Jeremy decides to drunkenly play with a knife whilst urinating and yes, he chops off his p***s, which creates the title The Package.

Now, this a bizarre movie even by Netflix’s standards. The group of friends have to attempt to courier Jeremy’s dick to the hospital before it exceeds its sell-by date, in order to reattach it surgically. All of the gags surround the bloodied, chopped off p***s paraded around by a bunch of teenagers who still think drinking is impressive. There is a moment where I was utterly repulsed; a long slimy bug crawls all over the nearly deceased p***s and Sarah throws up over both. I’m not sure who the target audience is. 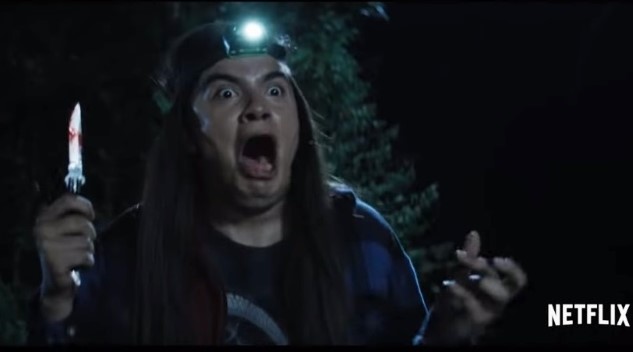 I can only assume there is an audience, so halfway through The Package, I decided to balance myself and take it on like a real critic. In fact, eventually, I did laugh out loud as the dick gag had finally crept up behind me and slapped me on the head. A snake bit the p***s, meaning someone had to suck the poison out in order to keep it alive, so it became an immature dick sucking joke. Sean decides to bravely take on task, which interestingly, is a character played by Daniel Doheney, who recently starred in Netflix film Alex Strangelove, about a similarly aged teenager who realises he is gay. My mind did entertain the idea that The Package may be a freakish sequel.

Regardless of the fact that some gags are acutely funny, The Package is a story that relies on a p***s that the characters struggle to keep hold of. It slips and slides around the film so much that I was starting to think that Netflix are trolling the film critics. The Package tries to have fun, with the obligatory romantic storyline between some of the characters. If you like dick jokes constantly for 100 minutes then this is for you, but I am not going to convince myself that this is even an average film. It is mind-numbingly dumb. I hope I never have to write a review that depends on the word dick so much ever again. I wonder if Netflix will consider doing a gender swap version…