In Ruin Me, six people attend a 36-hour Slasher Sleepout, and – wouldn’t you know it – start getting picked off one by one. Is it just a game or not?

In Ruin Me, six people attend a 36-hour Slasher Sleepout, and – wouldn’t you know it – start getting picked off one by one. Is it just a game or not?

Going to keep this one short, people: I loved Ruin Me, and I have to be careful telling you why, as you’d hate me if I spoiled it for you. There. Already, you know there are things to watch out for. But you don’t know what. Stay on your toes!

That’s kind of what it’s like for these six people (two couples and two singles) who go on a horror-film-style escape/survival weekend. The main character, Alex (Marcienne Dwyer) is not a fan of horror films – there’s a nice little exchange when they discuss Dirty Dancing – she’s just tagging along with her boyfriend Nathan (Matt Dellapina) who is, at least a bit. The others in the party, a pseudo-goth couple (Eva Hamilton and John Odom) and two single guys (Chris Hill and Cameron Gordon) are definitely into horror: they’ve attended these weekends before, know their stuff and know the sort of thing to expect. But then someone gets hurt for real and nobody knows what to expect anymore.

The group of characters in Ruin Me is very believable, although slightly cliched. But this is exactly the group I would expect to bump into on the train going to a Comic-Con or horror festival: there will be some know-alls and some noobs, some who want to play the part and some who’d rather stay on the fringes. Alex (the least cliched) is the focus, though. We know only as much about the other characters as she knows; and in contrast, we get to her. We see how she relates to different people, how she puts clues together, and how some things mess with her head.

That’s where some of the wit and entertainment comes in: are the group being toyed with? Is one of them screwing with the others? Or are the writers (Trysta A. Bissett and Preston DeFrancis) taking susceptible viewers on a Cabin in the Woods–style ride? I’m not going to tell you, but it is great fun watching things unfold.

The other fun to be had, of course, is spotting references to other films. Some of these are in what we see happen on the screen, while others are openly mentioned by the group. They discuss favourite films and the tropes they half expect to see played out in their Sleepout experience. There aren’t explicit rules spelt out like in Scream, for example; but it filled a little meta hole that had I’d been waiting to satisfy since I saw Rubber. 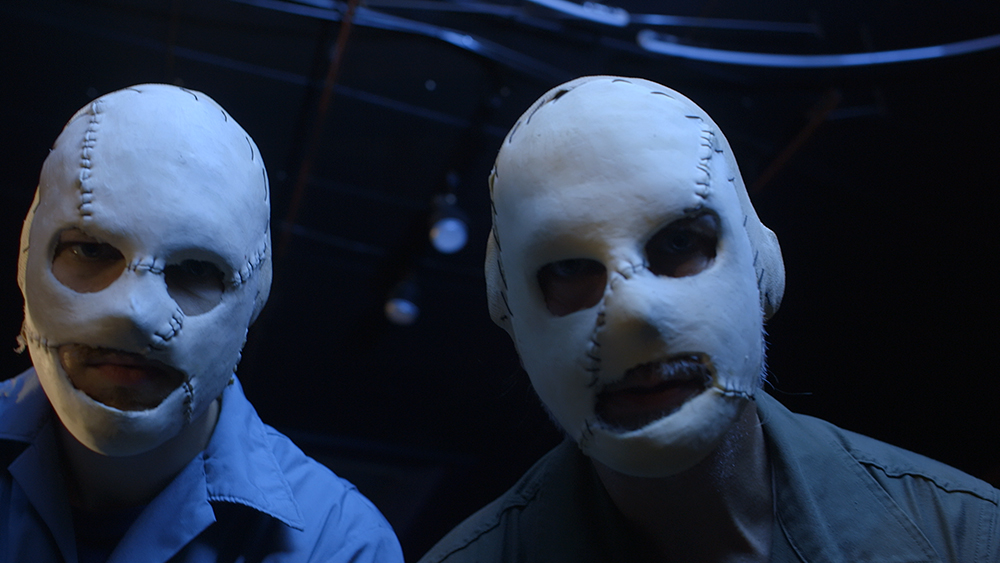 Although on the surface Ruin Me is a fun slasher-style thriller, there are some more serious topics lurking underneath. For example, controlling relationships feature, especially in the way vulnerable people can easily be taken advantage of. Trust and openness are shown as being somewhat double-edged, as people are not always as they seem (and some may want to be “open” just on their terms).

If Ruin Me was so great, why didn’t I give it full marks? Difficult to put my finger on what, exactly, but some of the film definitely could have been done a bit better. There didn’t appear to be much imagination applied to the cinematography, for example, and some of the dialogue could have been sharpened up. But then, I did fall for The Endless not long ago: great things can be achieved without a huge budget.

That said, I liked Preston DeFrancis’ direction. The mystery and action built up smoothly, and the sideways steps felt natural, rather than clumsy. I’m very glad there is another film (After the Summer) on the way with the same co-writer. And I’ll definitely be looking out for more films with the same cast again; not just the excellent Marcienne Dwyer, but Matt Dellapina, Eva Hamilton and John Odom too.

This is a fun horror thriller for genre nerds who are fed up with “horror comedies”. It made its mark at genre festivals last year and is now available on Shudder. I liked it a lot. In fact, it’s the one film that’s kept me glued to the screen the most during this year’s #100DaysOfHorror so far (closely followed by Killing Ground).

Now, would anyone like to buy me the t-shirt?