Spike Lee’s BlackKkKlansman is based on the real-life events of Ron Stallworth (John David Washington). Stallworth is an African-American police officer from Colorado Springs who manages to infiltrate the Ku Klux Klan, with the help of a white partner, Flip Zimmerman (Adam Driver).

Spike Lee’s BlackKkKlansman is based on the real-life events of Ron Stallworth (John David Washington). Stallworth is an African-American police officer from Colorado Springs who manages to infiltrate the Ku Klux Klan, with the help of a white partner, Flip Zimmerman (Adam Driver).

I went into BlacKkKlansman knowing absolutely nothing about it, but the premise sounded so unbelievable that it could only be based on a true story. The film is based on the memoirs of Ron Stallworth, the first African-American police officer in the Colorado Springs Police Department. The whole unlikely tale comes about after Stallworth calls an advert for the KKK in a local newspaper, while he’s riding high on the success of his first undercover operation.

The whole thing escalates quite rapidly and before you know it Stallworth is using a colleague, Flip Zimmerman, as his real-world avatar. It’s an unusual relationship that sees Stallworth doing all of the phone work while Zimmerman gets the pleasure of being the actual body at the meetings of the Klan – sorry, the Organisation. It’s a story that is so outrageous that it could have only been based on a true story. Since seeing the film I’ve been told that Stallworth did actually manage to talk to the former KKK Grand Wizard David Duke (played by Topher Grace) and convince him that he was a genuine recruit.

Director Spike Lee manages to balance BlacKkKlansman well as the film veers between a fun police romp and an increasingly tense and taut socio-political thriller. I think that the tonal jumps might not be for everyone as the film does shift course quite quickly at times. Personally, I thought that it worked really well with the moments of humour – and there are some really funny moments – only serving to ramp up the moments of tension. 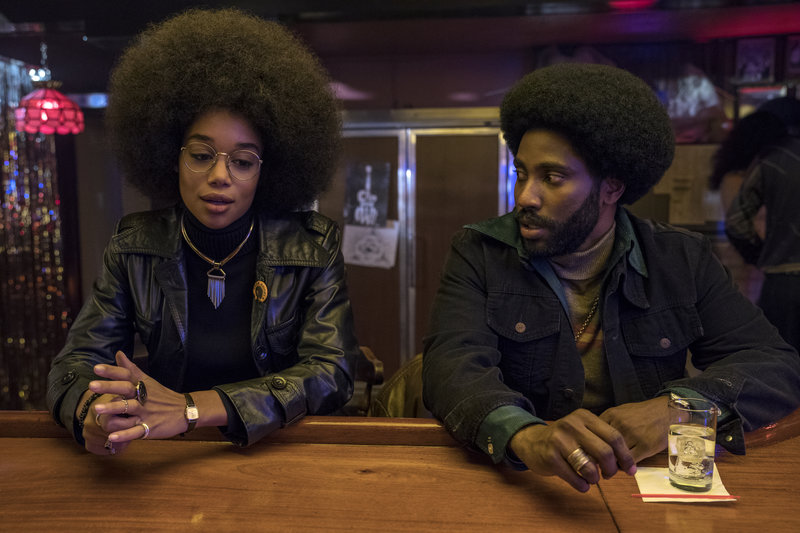 There are moments of high tension, as some of the more suspicious members of the KKK start to suspect holes in Ron’s background. These moments are really well put together and manage to convey the very real danger that both men were in. While the film itself is set in the 1970s it feels so incredibly relevant for the world today and I think it’s here that the film manages to extract the most terror. It’s all very well having this knockaround cop movie where we can all laugh at the bumbling caricatures in the Klan, but it resonates quite clearly with current events. The film knowingly pokes fun at the state of the world – there’s a line about the ridiculousness of having an American President with “right-wing” views. It’s a moment in the film that perfectly exemplifies the balance between humour and the dawning realisation of just how little progress has been made.

I enjoyed BlacKkKlansman a great deal. It’s an entertaining film but it’s also an important film. It tells a story that I never knew existed and it makes everything feel so worryingly contemporary. The ending of the film is incredibly powerful and made an already thought-provoking film even more relevant. I appreciate that the tone of the film might not be for everyone but I think that this is really essential viewing. It’s a strong contender for my films of the year list and I’d be surprised if it gets displaced before the end of the year.