The backstory to the creepy demon who bothered Lorraine Warren in The Conjuring 2, etc: in 1952, a priest and a novice nun are sent to Romania to investigate the apparent suicide of a young nun and the abbey in general.

The backstory to the creepy demon who bothered Lorraine Warren in The Conjuring 2, etc: in 1952, a priest and a novice nun are sent to Romania to investigate the apparent suicide of a young nun and the abbey in general.

If like me you’ve been looking forward to The Nun, I’m sorry to say you will probably be at least a bit disappointed. I left the cinema feeling quite deflated by it (indeed, if I’d gone on my own, I would probably have been bored by it). Now let me see if I can explain why without spoiling it for you; because I know, if you’re a Conjuring or James Wan fan, you’ll go anyway.

It definitely does have some plus points mind you: The Nun looks great. There is a fabulous spooky castle-cum-abbey, with well thought through sets in every room, a menacing pair of gates out front, and a cemetery round the back. The Conjuring and The Conjuring 2  (the Annabelle spin-offs too, to a degree) were elegant – almost literary – in their period atmosphere; however The Nun was a little too exaggerated, making it more like an early Hammer film at times, rather than a serious modern horror drama (which I consider the first film to be). The set is quite fabulous, with or without the supernatural goings on; but once ghosts, shadows, flickering candles and dusk are added, the scene is set for a good old horror.

On top of that setting, the production and the score make everything in The Nun pretty creepy. Sometimes it’s overdone, though: there are times when the nasty nun figure Valak seems to appear everywhere, even if it’s just habit-like shapes as a recurring visual theme. Consequently, I got so used to seeing her that the intended jumps didn’t catch me. The music, too, tries too hard: melodramatic choral music here and there, and suddenly quiet spells, as if telling you exactly when to feel tense (that didn’t work). 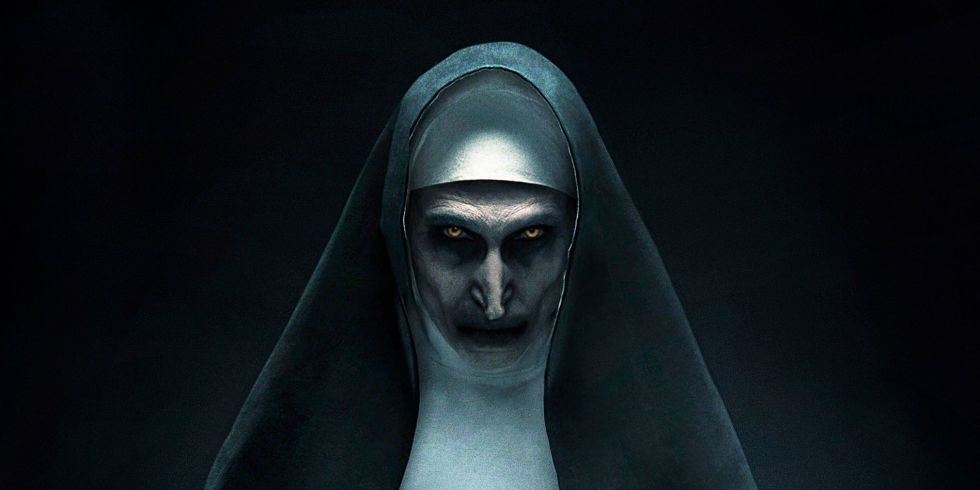 Here’s another plus for you: the cast. Taissa Farmiga and Demián Bichir were excellent as the priest and novitiate sent to look into the unfortunate death. But, but, but… If the film is set in the Vatican and Romania (where it was filmed), why are there more Irish actors with speaking parts than Romanian or Italian; and I don’t believe we heard the Romanian or Italian languages spoken at all (and no, Latin doesn’t count). And why use two actors who are related (Taissa and her sister Vera Farmiga, who appeared in two short linking scenes), if their characters aren’t related in the story? This made some viewers a little confused, I’m sure. And why was Sister Irene (Taissa Farmiga’s character) assigned? Because she used to see visions? That didn’t exactly seem to help her.

Add in the local-but-not-local good looking muscle (Jonas Bloquet) as visual and light relief, and we have a team that harks back more to Buffy the Vampire Slayer than The Name of the Rose, which apparently inspired The Nun‘s set-up for writer James Wan.

Yes, Wan wrote The Nun, but he didn’t direct it, as he did the first two films (actually, he had even less to do with Annabelle). I have no doubt at all that it would have turned out better if Wan had more control. The director was Corin Hardy, who has only led one feature film before: the supernatural horror (like countless others, set in a forest), The Hallow. He’s made short films and other videos, mind you, and it is evident from those and The Hallow that his strength is in visually atmospheric work, but still. Any number of other directors could have directed The Nun to the same standard as I watched last night. If James Wan wanted The Nun to be “the darkest chapter in The Conjuring universe”, he should have directed it himself. 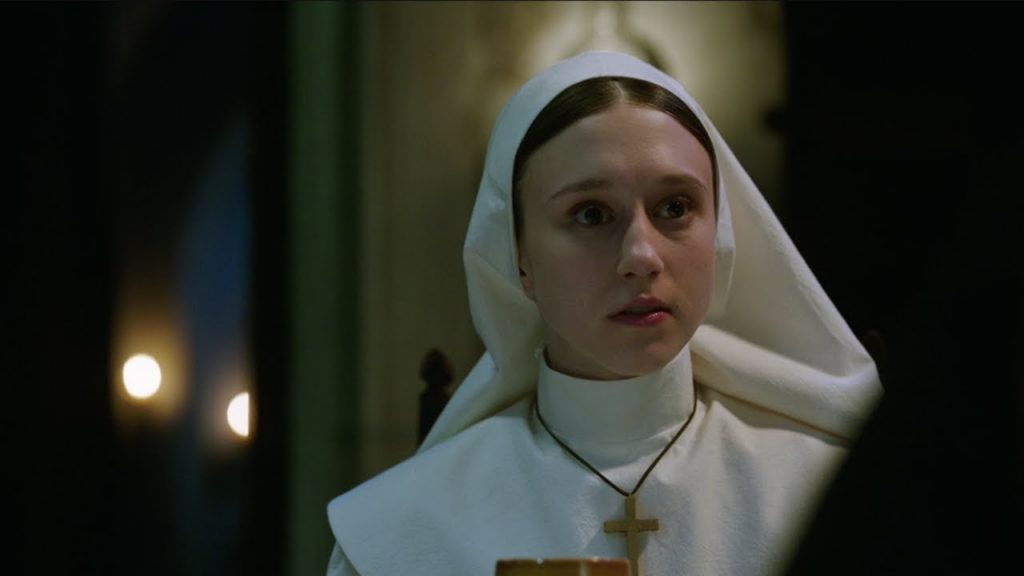 As it is (and here comes the main problem with the film), Wan did not give us a great piece of writing, either. The plot turns out to be not the main backstory of Valak (who’s not a nun, but a demon who takes the form of a nun), but rather one chosen because it has a loose link to the Warrens (the couple who form the focus of The Conjuring films). The main backstory (about – spoiler alert – a duke who was into Satanism, and opened a portal into Hell, of all things) is merely retold by one of the nuns resident in the abbey; despite how far-fetched it sounds, I think that would have made a better film. There are neat coincidences and random unexplained spooky happenings galore, few of which fitted together into a much of a plot. The plot had too many holes and was written too sloppily: I expect so much more from one of the minds behind Saw, Insidious and, of course, The Conjuring.

Sorry: I’m complaining. Yes, I’m going to complain! This is a film I’ve been looking forward to, and I feel let down. I don’t know if you read the #100DaysOfHorror piece I wrote last week, but in the introduction, I outlined what I look for and enjoy in horror films. Sure, it gave me situations and people I’m unlikely to encounter; but some of them were a little too ridiculous to draw me right into the film (which is what is needed for escapism, at least for me). It certainly didn’t give me a great plot, intelligence, wit, or much excitement.

Overall, The Nun was well made and acted, but lacked so much of what I’ve come to expect from this series, this writer, and decent horror films in general. Balls.