A comedy? Maybe. Pleasantly surprised Hollywood came up with a slice of middle America that isn’t portrayed on a farm or a sports field while calling it authentic. It’s a stand out showcase for Hall, and Richardson continues to display her versatility.

A comedy? Maybe. Pleasantly surprised Hollywood came up with a slice of middle America that isn’t portrayed on a farm or a sports field while calling it authentic. It’s a stand out showcase for Hall, and Richardson continues to display her versatility.

When it comes to Hollywood portraying middle-class America, it often is regulated to scenes that feel like middle America rather than what they actually are. If you were born and raised in New York City or Los Angeles, you would think everyone living somewhere between was raised on a farm or that life centers around a sports field. So call me surprised when the powers that be lined up a multicultural cast for Support the Girls, set in a Texas city that shows the average resident struggling to make it as a middle-class citizen.

We meet Lisa Conroy (Girls Trip and the Scary Movie franchise’s Regina Hall), who manages what I’ve recently heard delightfully termed as a “breastaurant”: a sports bar that features waitresses dressed in skimpy outfits. Think Hooters near a highway. They have some loyal customers who respectfully enjoy the company of the girls, with a smattering of piggish beer-swilling ones mixed in as well (Lea Delaria is a stand out as a loyal customer who tells some ungentlemanly ones, “I’m twice the man you are and the woman you’ll ever screw!”).

Lisa has worked hard but has issues at home. The problem is she takes home her employee’s or her “girls'” drama as well. She cares too much, often putting her own personal needs or issues on hold to support her girls. Too often, we see management portrayed in films in a negative light. We watch her be the wall between her team and her bosses, not that all girls appreciate it. There’s a wonderful scene between her and her bossy Cubby (James Legros) where he tells Lisa, “Rule number one, no drama.” Lisa replies, “You want me to tell a bunch of 20-year old girls no drama? Why don’t I put a sign that says no breathing too!” Cubby reminds her that the girls (including Haley Lu Richardson, Shayna McHayla, Dylan Gelula, AJ Michalka, Jana Kramer) are hired as entertainers, not waitresses, so they can be let go for a variety of vain reasons whenever they want. 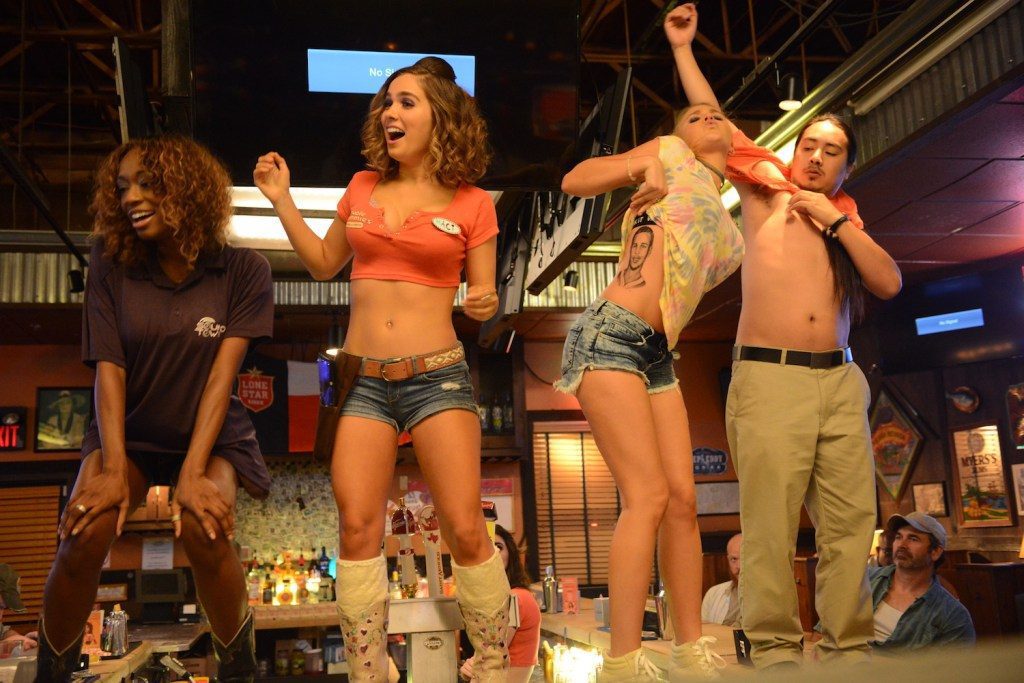 Admittedly, there has been a disconnect between critics and audience reactions to this film (Rotten Tomatoes currently has a 91% critic rating compared to a 67% viewer approval). The issue is that it was marketed as a comedy. While Support the Girls certainly has comedic moments, it’s really more of a drama than anything. You can’t get mad at critics for enjoying the film; it’s judged for what it is. You can understand the customer for feeling cheated for not enjoying the film when they expected a fun comedy.

Support the Girls is a good film but best enjoyed as a light drama and let the comedic moments pop up organically. Who knew Hollywood could come up with a slice of middle America that isn’t a retread storyline and that comes from a fresh perspective? Haley Lu Richardson continues to shine and show her versatility in multiple roles as of late. She is a rising star who deserves her own vehicle.

Support the Girls, though, is ultimately a wonderful showcase for Regina Hall. The role of Lisa has finally given her a chance to take advantage of her multiple strengths that aren’t always allowed to be put on display. Her performance will most likely be lost in the shuffle during the awards season. That’s a shame. It’s one of the best so far this year, even if the academy can’t recognize one and rather be hit in the face with one that fits their elitist views. Performances like this deserve to be wrapped in Oscar gold.