“Apogee” sees Lodge 49 continue to get better and better, as various wacky schemes develop real consequences in this penultimate episode.

“Apogee” sees Lodge 49 continue to get better and better, as various wacky schemes develop real consequences in this penultimate episode.

Whenever you hear someone say, “Maybe things are finally looking up,” you know they’re not. Especially in AMC’s Lodge 49, where in “Apogee”, the penultimate episode of the season, things are indeed looking up… until they’re all of a sudden looking directly down.

Dud (Wyatt Russell) and Ernie (Brent Jennings) are still enthusiastic about the money-making scheme that Gary (Bruce Campbell) dreamed up last week; the former can barely restrain himself from spilling the scheme to anyone who’ll listen, and the latter is thrilled that Scott (Eric Allen Kramer) has asked him to resume sleeping with his wife, Connie (Linda Emond).

All this, and it’s band night at the lodge, with Don Fab and the Longshoremen providing entertainment. (That’s a great name for a band.) Dud even gets up and makes a speech, although he does admittedly fall off a speaker while doing so. It’s a fun, uplifting scene that helps to remind the Order of the Lynx that even though things are looking bleak, there’s hope yet that Lodge 49 will survive.

But will it? One of my favourite on-going details in Lodge 49 is how Jocelyn Pugh (Adam Godley) keeps sullying Blaise’s (David Pasquesi) perception of the order as a noble, mystical calling. But all the while Jocelyn is enjoying himself more and more at the beach, which is kind of what Lodge 49, the show, is all about: subverting expectations, and finding humour, warmth and satisfaction in the unlikeliest of places. 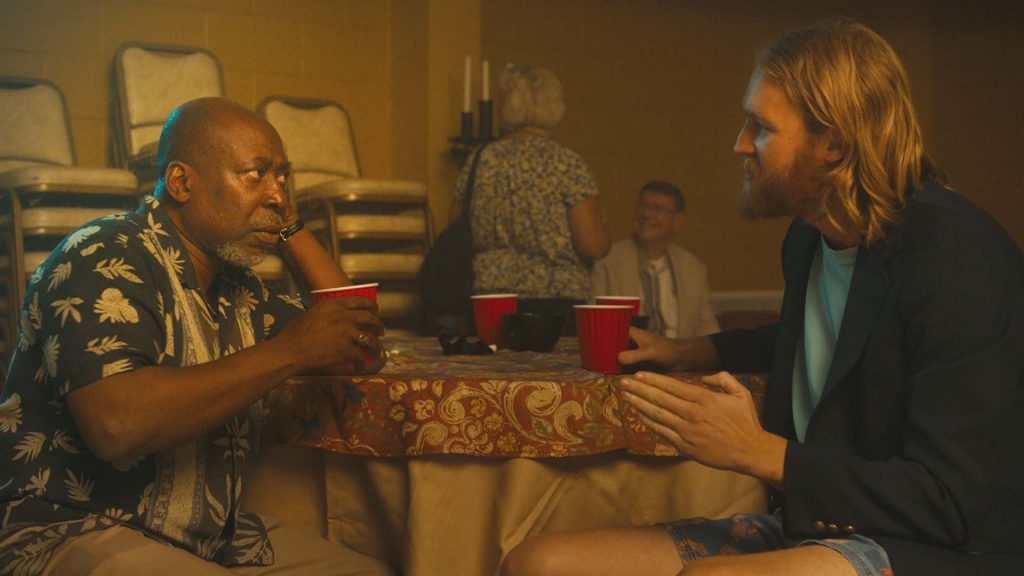 Then again, it’s also about s**t going wrong all the time. “Apogee” took all this jubilation and, by episode’s end, had turned it all on its head. Ernie told Connie that Scott knew about their affair, which led to problems. Liz (Sonya Cassidy), who spent much of the episode aboard a boat circling the bay while being promised great success by her new corporate employers, found herself overboard and swimming to shore. And Avery (Tyson Ritter) somehow managed to not only ruin Dud and Ernie’s meeting with Gary’s accountant, but also to hold Gary hostage, get nicked in the ear with a harpoon, and escape with all the investment money.

Gary fell from his balcony and found himself impaled on the horn of a narwhal.

Lodge 49 is a weird show. But the fact it’s so weird allows an episode like “Apogee” to exist; an hour of television that ran the gamut from comedy to philosophical drama to character study to thriller. Each episode is weirder – but also better – than the last. It’s a shame the series isn’t getting more attention from the mainstream press, and indeed from viewers, because it’s quite unlike anything else out there.