Mike Flanagan does an excellent job of adapting the famous ghost story into an American gothic drama for a modern audience. A ten-part drama for Netflix, this review covers the first episode only.

Mike Flanagan does an excellent job of adapting the famous ghost story into an American gothic drama for a modern audience. A ten-part drama for Netflix, this review covers the first episode only.

To lovers of the horror genre, Shirley Jackson is an American goddess, just as Edgar Allan Poe and H. P. Lovecraft are their American gods. Tread carefully, lest you offend her followers! So when commentators heard that Mike Flanagan had been commissioned with adapting The Haunting of Hill House for a Netflix series, some were wary and some excited. Flanagan himself has a reputation for making good horror films, which has steadily gained in strength over the years; not least within the context of Netflix (see Gerald’s Game and Before I Wake).

The 1959 novel focused on a disparate group of people invited to an old mansion to see what they make of its supernatural reputation. They do indeed experience a range of events (noises, ghosts, strange writing, etc) and each of them responds to them according to their individual natures. Some of the things which happen in the book take place in the new series too, though not necessarily in the same order; but the main – and radical – change Flanagan has made is to the House’s visitors: they are a family, rather than (complete) strangers.

The opening episode introduces the family; first in a flashback to when the siblings were kids, and then catching up with them, on and off, as adults. The flashback showed Olivia (Carla Gugino, Gerald’s Game) and High Craine (Henry Thomas, Ouija: Origin of Evil) moving their two sons and three daughters into Hill House to renovate and resell it. We don’t spend much time with that scene, but long enough to know that the children (especially the youngest ones) are not settled there and want to leave; one of the twins, Nell, has regular nightmares about the “bent neck lady” (creepy or what?). 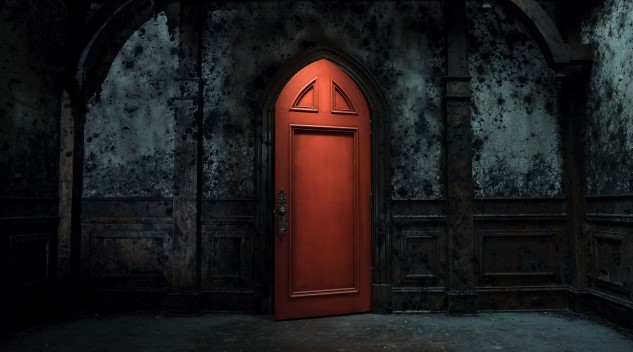 After that, it’s very interesting to see the Craine siblings grown up: the oldest, Steve (Michael Huisman) is a writer of supernatural stories, though still a complete sceptic; Shirley (Elizabeth Reaser) is a seemingly uptight manager of a funeral home; Theodora (Kate Siegel) we know less about, except that she’s more obviously lesbian than her novel counterpart, and wears long evening gloves; Luke (Oliver Jackson-Cohen) isn’t seen until near the end of the episode, but he’s talked about plenty, as unreliable and a drug addict… And then there’s Nell (Victoria Pendretti), Eleanor in the book, who has apparently always been on the edge of a nervous breakdown, with constant anxiety and nightmares returning.

So this dramatis personae is not the same as what you may be familiar with, but it works well for lengthening the story into a well-constructed saga. Actually, The Haunting of Hill House feels almost like an atmospheric soap opera at times, especially because of those highly contrasting characters. But that doesn’t last too long, as hints at mystery creep in pretty regularly, especially when we see another flashback of the family leaving Hill House in the middle of the night, and realise their mother is no longer around. And why do the caretakers, the Dudleys, not live in the property? (Yes, they have been kept from the novel too.) And why does Nell make her way back to Hill House, in contradiction to what she tells her family… Not to mention the jolt the end of the episode leaves us with.

But is it scary? Mostly, this opening episode is atmospheric, rather than scary, though there are some downright sinister moments here and there. Personally, I found a couple of jump scares kind of cheap and unnecessary, but it was clear that some others at this preview event enjoyed them. I’m pretty hopeful that now Flanagan has set things up with a mystery in both the present day and the past, the family will assemble at Hill House as the group in the novel did, and we’ll find out more about the place and its history. In terms of the supernatural goings-on at the House, it’s impossible to tell so far whether anything was really there and taking place or all the products of imagination and hysteria; which again fits with the original. The grown-up Craine siblings certainly all seem to have different feelings about their time there, and I really look forward to finding out more when the whole series is made available.