A typical modern family gathers for Christmas, full of nostalgia and bickering. They wake on Christmas morning to find they are unable to leave. At last: a great Christmas horror film from the UK.

A typical modern family gathers for Christmas, full of nostalgia and bickering. They wake on Christmas morning to find they are unable to leave. At last: a great Christmas horror film from the UK.

I won’t leave this to the end, I’ll tell you now: Await Further Instructions blew me away. I knew little of what to expect, past the description on Grimmfest’s programme, and I recommend you do the same. Unfortunately, this means avoiding the trailer, as it does show too much of what to expect. So I’m going to be careful here, expanding on my summary just a little, but mostly focusing on the film’s qualities, rather than content.

And yes, it is a Christmas film.

OK here goes: Await Further Instructions is about the Milgram family and focuses on Nick (Sam Gittins) and his girlfriend Annji (Neerja Naik). Nick is clearly nervous about introducing Annji to his family, but she has no idea how traditional – no, let’s call a spade a spade – bigoted they are. After trying their best along with everyone, they decide not to stay past Christmas morning, but when they get up, they discover they cannot leave: doors and windows open, but there is a strange and unpassable black material covering them all. The natural (knee-jerk) response is to turn on the TV for news, but the television simply gives them a single line of text: “Stay Indoors and Await Further Instructions.” 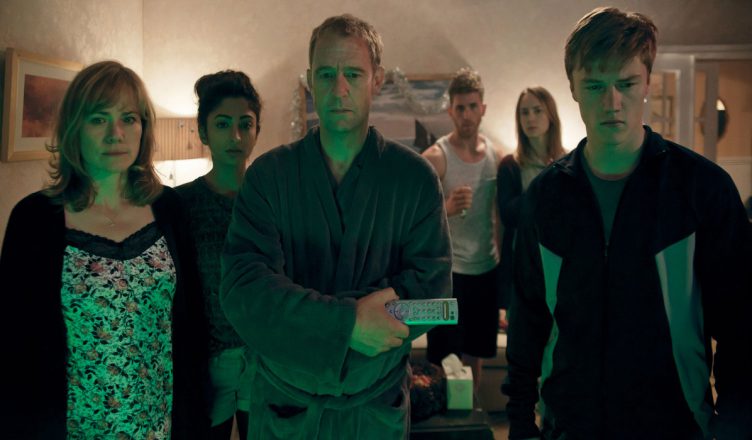 From here on, Await Further Instructions is no longer a horror film about a family Christmas, but a siege horror, including some of the elements I saw in Howl (yes, that’s where I had seen Gittins before; a small part as a petty crook!): when people are forced to stick together, some difficult truths come out, but sometimes strengths come out, too. Just like in Howl, they have no idea what is outside, whether they really should try to get out, or if that might be worse, and no-one is terribly good at being in charge (though a couple seem to think they are). Unlike Howl, though, this one is distinctly not a comedy horror in the slightest: there are moments when you might hope that the satire and sarcasm might make you laugh, but – especially when the story starts to expand – this one is cold and serious.

Await Further Instructions was written by Gavin Williams, whose experience has mostly been short films and production until now. But this was such an effective script, I hope he stays in feature films: he has drawn characters who I feel as if I know (this country’s demographic in a nutshell), and engaging in arguments I can imagine having myself.

I did mention satire earlier, and the family is indeed the first presentation of that. Some say that the family being separated from the outside world, and their resultant reactions, is a reflection of current feelings around the prospect that the UK will be isolated from Europe in the foreseeable future; personally, I feel that’s a bit of a stretch, but the family itself could be any family in any town here. We have the old-fashioned nuclear family at its heart (overbearing father, subservient mother, two kids), with extra elements: the dinosaur Granddad (David Bradley, the most famous face present), who clearly set the bigotry into the family personality right from its start; pregnant chav daughter (Holly Weston, who I saw in a bigger part in Howl) with her alpha partner (Kris Saddler); and the mistrusted minority, represented by Nick’s Asian girlfriend Annji. Not a single one plays their part poorly; though the acting shines particularly when the stress obliges the various characters to act a little out of character. I’m especially going to look out for more featuring the two who played the parents: Grant Masters and Abigail Cruttenden. They’ve apparently both been in plenty of British television, and you may have seen Cruttenden in The Theory of Everything. And of course the two leads: Sam Gittins was nominated for Screen International’s Rising Star Award at this year’s Frightfest, where Await Further Instructions had its UK premiere); and Neerja Naik, who seems to have a career as broad as Bradley’s, including Shakespeare. 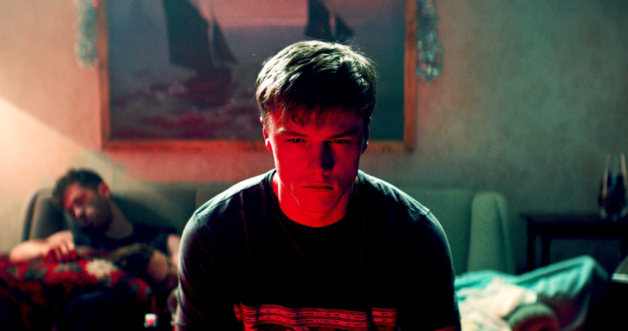 The other aspect of Await Further Instructions which was clear satire was the use of the television. We may have seen the TV as an instrument of horror before, such as in Ring and Poltergeist, but in this film, it symbolises all our screen devices and is presented almost as a god: when we don’t know what’s going on, or what to do, we switch on our electronics for guidance. Further instructions do indeed come forth from the TV, but there is no ownership given for the instructions (“Must be the authorities”) and so they are barely questioned.

The film is directed by Johnny Kevorkian, who made one other feature film previously; The Disappeared in 2008 (which screened at the very first Grimmfest). It had a reasonably good reputation in genre circles and Await Further Instructions will be a relief to those wondering what had happened to him since then. The direction may not be perfect, but I think it is perfect for this film: if it had been too finely polished, that may not fit with the “everyman” feel of the family, nor might it have been quite so believable. But where Kevorkian does definitely succeed is the pacing: he draws us into the home gradually, without taking too long about it (the film is only an hour and a half long, after all), and shocks us with moments that would shock anybody; nothing is gratuitous or overdone. (There may be some violent and bloody acts, but this isn’t the sort of film where the camera zooms in on them: it tends to look away after a second like any real person would.) As well as the pacing, he also increases the tense atmosphere smoothly; not just that the tension increases (of course it does), but that it broadens in scope. The film opens and closes with the same suburb, but looking quite different: the collaboration between writer and director transforms this place in ways you could not anticipate from the start, and it is very, very effective.

There is only one flaw that jarred with me (though fortunately not much) and that was a special effect towards the end. It did improve, but when it first appeared, it seemed home-made for just long enough that it risked messing with my suspension of disbelief. Fortunately, the story was strong enough that it kept me gripped. Await Further Instructions had a good production team (including Jack Tarling, known for that other modern Yorkshire great, God’s Own Country), but perhaps special effects aren’t one of their strengths.

As I said near the start, this really is a Christmas film: not only does it take place over Christmas day, but Christmas is one of the rare catalysts to getting a distant family together. The other such catalyst could be a wedding, but Christmas happens to pretty much every home in every country… which really does reinforce the feeling that the family in Await Further Instructions symbolises a typical one. In this story, they could indeed be an example of horror going on everywhere…

If you don’t get the chance to see this film in festivals, it will be coming to UK cinemas and home media in December. I’ll certainly be watching it again when it does, hopefully just before Christmas: it’s surprising, cold and very British… perfect!