Yesterday, perhaps against my better judgement, I took my daughter to see Goosebumps 2: Haunted Halloween, the second attempt over the last few years to transplant the eccentric oeuvre of prolific teen-horror author R. L. Stine into a family-friendly big-screen blockbuster. And, at least according to her, that mission has sort of been accomplished.

It should be noted that the first Goosebumps film, from 2015, was both well-received and a modest financial success, so a sequel along the same lines was inevitable. And Goosebumps 2: Haunted Halloween is very much along those same lines: It’s kid-focused, I’d argue to a degree that’ll annoy the adults forced to supervise (although there is a funny gag about Stephen King’s It if you stick around long enough to hear it); the plot again concerns the author’s creations breaking loose from his manuscripts and terrorising American suburbia; and the author is, again, played by Jack Black, although this time – and despite featuring heavily in the film’s marketing – he only shows up briefly towards the end, conveniently when the slightly overlong film’s ideas and energy are both starting to wane.

Before that, the film’s plot concerns the lively escapades of Sonny and Sam (Jeremy Ray Taylor and Caleel Harris), two teenagers who start up a junk-disposal business and in so doing unearth Slappy (Mick Wingert), a sentient, psychopathic ventriloquist’s dummy. The doll – one of the few connections between this film and the first – has telekinetic powers and the ability to bring to life various Halloween toys, outfits and decorations, including the lavish and elaborate ones adorning the house of their next-door neighbour, played by Ken Jeong in a typical Ken Jeong role. 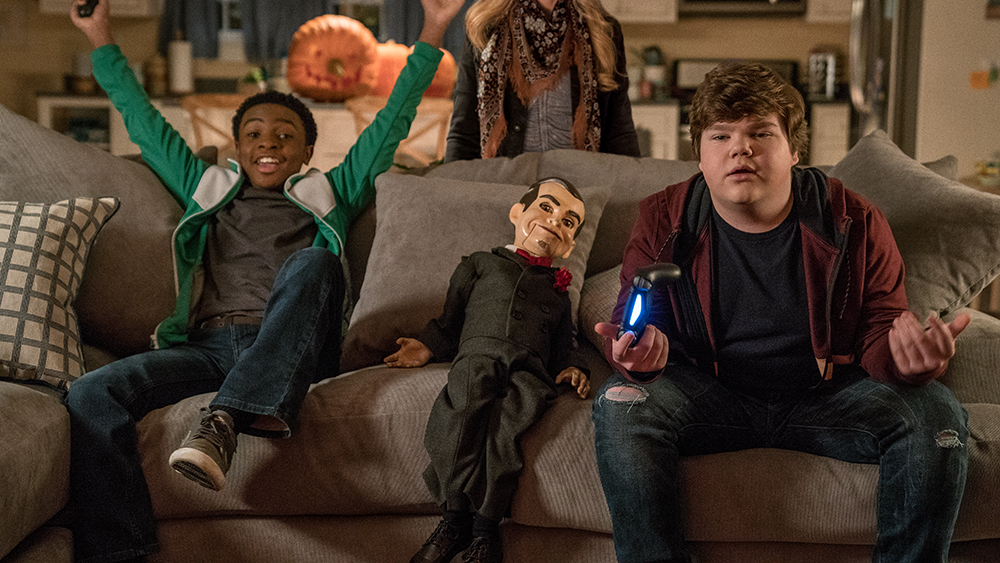 This is all serviceable and sugary fun for all ages, and it’s also smart enough to include some authentically creepy stuff and the odd jump-scare without violating its PG certificate or genuinely traumatising the audience. Sonny and Sam are likeable kids, while Sonny’s older sister Sarah (Madison Iseman) and their mother Kathy (Wendi McLendon-Covey) provide teenage boys and parents, respectively, with something to latch onto. Credit should also go to Rob Lieber’s script, which refreshingly has the older characters embrace the otherworldliness quickly and without much fuss, and to director Ari Sandel for making enthusiastic use of the special effects budget, which my daughter certainly appreciated.

Goosebumps 2: Haunted Halloween loses something for Jack Black’s extended absence, and the plot is certainly overstretched, and the laser-focus on the kiddie demographic means that the film has less broad appeal than better family pictures that have the good sense to appease adults with various winks and nods that the children will miss. But otherwise it’s solid seasonal entertainment, with a well-judged tone and some colourful, imaginative sequences that I quite enjoyed. It’s as much a trick as it is a treat, but at this time of year, isn’t that what you want?