The Rookie is still guilty-pleasure television, but episode 3, “The Good, the Bad and the Ugly”, made some significant improvements.

The Rookie is still guilty-pleasure television, but episode 3, “The Good, the Bad and the Ugly”, made some significant improvements.


This recap of The Rookie Season 1, Episode 3, “The Good, the Bad and the Ugly”, contains spoilers. You can check out our thoughts on the previous episode by clicking these words.

The Rookie is like a guilty drive-thru McDonald’s that you consume late at night at a quiet 24/7 store; at the time it feels like a good idea, it tastes good and greasy, but once you start discarding the wrappers you realise you are still hungry and it was not worth the ordeal. The cop-drama is trash throwaway TV, and if it did not exist tomorrow, I’d be able to move on. The problem is, just like last week, despite the absurdity of it all, I found myself enjoying it. At least episode 3, “The Good, the Bad and the Ugly”, slowed it down a little, which works in its favour.

The third episode of The Rookie distances itself from John Nolan (Nathan Fillion) and prefers to scope in on  Tim Bradford (Eric Winter), the training officer of Lucy (Melissa O’Neil). I haven’t spoken much about Tim, but in the first episode he gave his mentee a difficult time, ended up getting shot and was placed on temporary rehabilitation to recover from his wounds. His wounds are mental as well; he has an escaped wife on the streets who is now a known drug addict. Tim has some demons to unleash, to the detriment of Lucy.

Tim is warned by Sergeant Wade Grey (Richard T. Jones) in the opening of “The Good, the Bad and the Ugly” that the trauma suffered from his gun wound will not be easy to overcome. Lucy has to witness her training officer visit his wife in hospital, who has unfortunately overdosed and has no interest in rekindling with her husband. This forces Tim to be out of control, picking unjust fights with bikers so he can force an arrest, forcing Lucy to feel uncomfortable while on patrol. 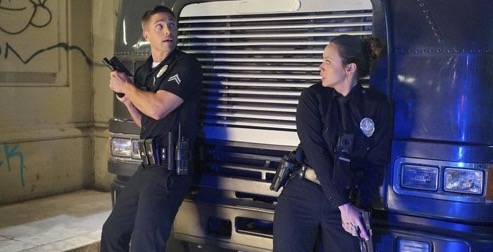 “The Good, the Bad and the Ugly” is a reminder that trauma is real, physically and mentally, and even those in good authority can spiral out of control. In the end, Lucy has to step in and intervene, dealing with Tim’s wife so that the risk of trouble remains low. We come to learn that Tim’s wife used to be a narcotics cop, providing more context to the scenario. Surprisingly, The Rookie gives the audience a character to sympathise with and strangely enough, I cared.

As for John Nolan, he is still suffering from being too kind, much to the dislike of his training officer Talia Bishop (Afton Williamson). Like the previous episodes, John finds himself in scenarios where he has to make an important choice; be a cop that makes decisions based on zero emotional factors or make a judgement based on the person he is confronting. In reality, we all know cops have to take the rational route, yet The Rookie shows some unimaginable good in the world, proving that John does have some leverage with his beliefs, even softening Talia, who allows an arrested father who made a minor mistake to go free.

As “The Good, the Bad and the Ugly” draws to a close, the rookies and their training officers are called to support a SWAT mission, and all of them successfully assist. Episode three further bedded in the rookies, who are slowly growing into the world of crime. The Rookie is still a throwaway cheeseburger, but this week we got a couple of fries; if the series continues to add in additional sides, then we may have something watchable on our hands.