The pilot of The Rookie goes at an unmanageable pace by rushing the main character and throwing in a lot of cop drama for no good reason.

The pilot of The Rookie goes at an unmanageable pace by rushing the main character and throwing in a lot of cop drama for no good reason.

In the opening moments of The Rookie‘s pilot episode, you see small-town guy John Nolan (Nathan Fillion) ponder what appears to be his final divorce papers. It swiftly moves to John in the bank, discussing with the manager a potential new lease of life. The bank is momentarily under siege, and John quibbles and nervously talks to the lead robber about how this scenario is a peak moment, especially after undertaking a new career in the police force. He must have been talking to the dumbest bank robbers in the world, because this strategy of talking to them in a shaky voice worked.

Anyway, I thought the bank robbery scene was going to be a landmark introduction, but there are a series of moments like this squashed in the pilot episode that eliminated all excitement. The immediate problem is The Rookie does not allow John Nolan to breathe at all in the first episode. I sincerely believed that the opening scenes were meant to demonstrate his character and from then on we embark on a journey of how he becomes more than a rookie cop. The pilot episode moves at an energetic pace, designed to show the brutal nature of working for a city police force. 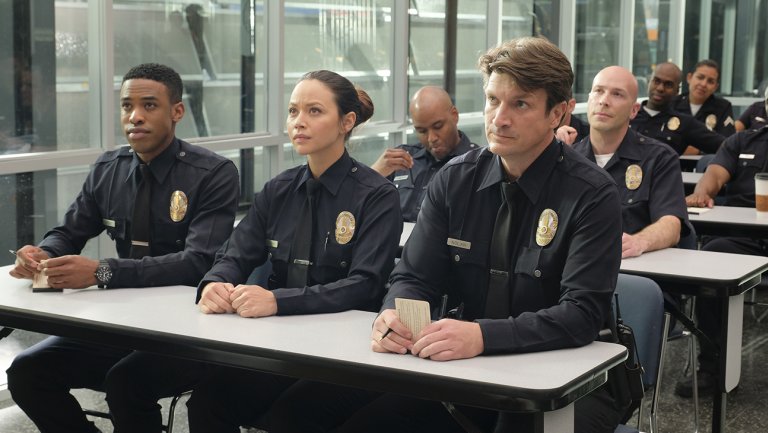 And once The Rookie introduces us to the police force, the pilot episode thrusts John almost into the background so we can learn the personalities of the other characters.  Sergeant Wade Grey (Richard T. Jones) lays down the hammer, calling John Nolan a “midlife crisis cop” because he is unable to mould someone at 40-years old. The other rookies all have their perceived faults as well, which is highlighted and bullied out by their mentors. The irony of the episode is that all their faults provide good results, apart from one rookie, Jackson West (Titus Makin Jr.), who freezes when he is meant to use his gun.

By the end of The Rookie pilot, a lot is thrown at you; the new rookies, a murder, a robbery, the bitterness of their mentors, and John quickly establishing a romantic relationship with rookie Lucy (Melissa O’Neil) in a frighteningly quick and random fashion. John has his moment, where he de-escalates a dangerous situation which earns a percentage of respect from his peers. Despite the entertainment, it is clear that The Rookie either wants to get to an objective quickly or it has no idea what show it wants to be. All I can say is, the opening episode of The Rookie is bonkers, so at least there is something to be enjoyed, but it needs to slow down.