Overlord is a serious, scary, fun and gory sci-fi horror adventure. Good job I don’t like my war films too real!

Overlord is a serious, scary, fun and gory sci-fi horror adventure. Good job I don’t like my war films too real!


Overlord is a horror film set firmly in World War II, in which a group of American soldiers set out to destroy a German transmitter in occupied France so that American planes can supply air support to the allied invasion. Parachuting into the area is a horror in itself, but once they make their way into the village and then the church where the transmitter is installed, the soldiers find Nazis as mad scientists, and resulting horrors they could not have imagined.

Well, what can I say? I went along to Overlord based on the trailer and little else, and I had a great time. I’m not someone who has much time for conventional war films (Saving Private Ryan and Dunkirk may be great quality, but not my cup of tea), but “weird? Add it to the list” as one of the Americans declares in Overlord. For me, the list of good untraditional war-based films includes Pan’s Labyrinth, Grave of the Fireflies, Wonder Woman and The Boy in the Striped Pyjamas. I’d call Overlord the horror fan’s Inglorious Basterds: it takes a real historical setting and extrapolates things that might have happened into the fantastical and dramatic.

Overlord is not made up of deep, complex characters, but comfortably familiar ones who can carry the action and nastiness between them. We have the American soldiers, primarily Private Boyce (Jovan Adepo) and his Corporal Chase (Iain De Caestecker), who show a little moral nuance here and there, but only just enough to keep the tension moving us forwards. There is also the standard plucky resistance woman (the nearly unknown Mathilde Ollivier) and the child that needs rescuing (Gianny Taufer). And on the opposing team, there is the marvellously twisted Colonel Wafner (Pilou Asbæk, who I’ve seen in 1864, A Hiijacking, The Killing etc.) and – a smaller role – Dr Schmidt (Erich Redman). We know what types of people these are bound to be, and the plot is engaging enough that we really do want to see just how brave/resourceful/evil/etc. these people turn out to be.

The fact that the lead character Boyce is a black man is an interesting choice: on the surface it looks like the standard trope of a minor person of colour (a private in this case) who saves the day, especially as he wouldn’t really have been integrated in a troop of Caucasian soldiers in World War II. But when I think back to other horror films, there was one pivotal one where a black man was surrounded by people (on both sides) who were not comfortable with him: that was Night of Living Dead. Boyce is quite different, deals with the situation and the people around him in a way that made sense for him, and – in my mind – completely dismisses any legacy from Night of the Living Dead. Adepo plays his part naturally too; none of his reactions seems contrived, though he does have quite a range to go through. Actually, all the cast were good; a well-chosen team and acting I couldn’t fault. That said, the roles may not have been terribly demanding, as I said earlier, but they were all given just as much richness as they deserved. (My favourite was the little boy, Taufer, who I really hope will appear in more films.) The only thing about the cast that was a bit odd was how many originated from different countries than their characters (the Nazi was Danish, the American soldiers British etc.). 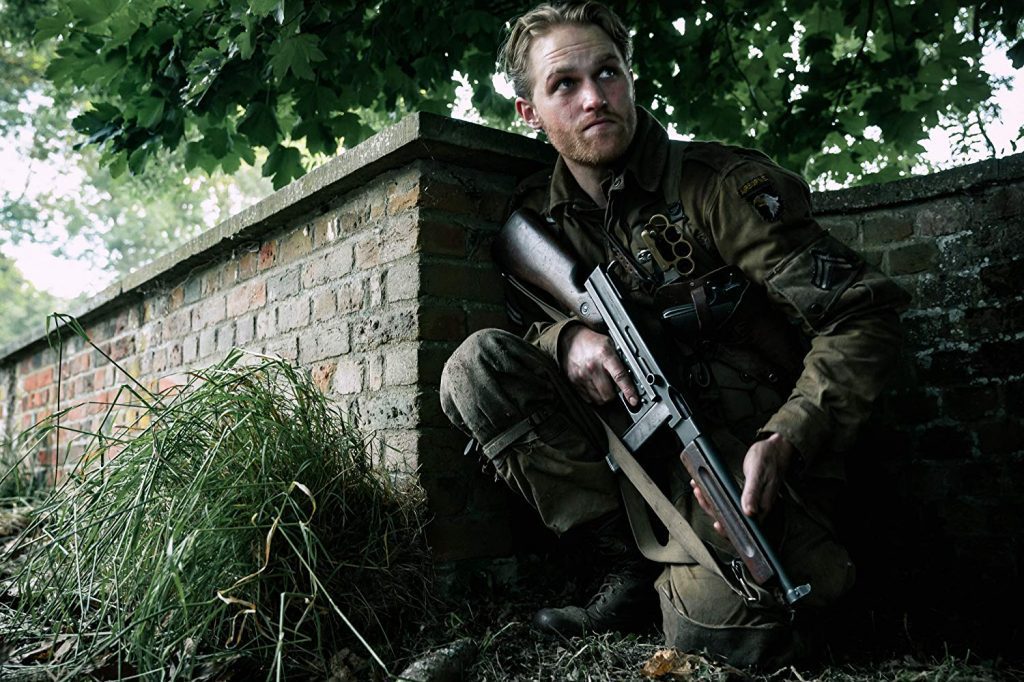 I mentioned Night of the Living Dead and you may have picked up from elsewhere that this is a film about “Nazi zombies”, but that’s too simplistic a description. Some people have expected zombie action all the way through, though Overlord isn’t like that; and rightly so in my opinion. The Americans are there for a crucial mission (towards the end it becomes apparent just how crucial when the context is spelt out), and they focus on that as any good and well-led soldiers would. It’s only as they near the village that they find some distasteful remains, and when they make friends with Chloe (the plucky villager) that they get a glimpse of unpleasant things being done to locals. If that establishment of the horror aspect in Overlord seems a little slow, well to me that made it more believable. Besides, films in which the nasties jump out from nowhere and with little hint can seem ludicrous: the horror has a proper build up in Overlord.

The first half of the film focused on the soldiers and their experience of the war, which is not tricking the audience into seeing two separate genres, but rather showing that war itself is horror. There was a scene in which all the soldiers had to parachute down through an aerial battle and find their mission site through a forest of Germans and mines. It was fast moving, shocking and downright scary at times, so the audience truly feels for how breathless and almost traumatised the soldiers are even before they get started on their goal. This is war… and so when they find themselves faced with worse, disbelief and poor judgement are not unreasonable.

The cinematography was superb, I must say, especially during those hectic opening scenes. It was rarely too fast-moving or dark to see what was going on, whether the soldiers were falling, fighting, scrambling through tunnels or emerging from water. Julius Avery’s direction was spot on too, neither zig-zagging nor too linear, with every aspect gelling together as it should. Sure, there were themes and explanations barely touched on, rather than fully explored: but this is an action film, and not like old James Bond films where the villain tells all. If allies encountered a secret Nazi lab for real, they would hardly get the complete details of what those experiments were for. Oh and JJ Abrams’ production influence is visible: there is a similar tension and claustrophobia at times that I remember from Cloverfield, as well as the sci-fi effects we’ve seen him manage well Star Trek and others.

I’m not going to give away the ending, of course, but it was a little neat and light for a horror film. Not unheard of, of course (it worked well in The Shallows, for example), and I’m glad it was done that way here. Now and then, I was concerned that a serious setting was not appropriate for a nasty story. As I mentioned earlier, war itself is horror, so there could have been a risk of minimising that by saying look at the Nazis being even more evil. But unlike The Devil’s Doorway, Overlord never pretended to be a “serious” film: it’s a horror action film, with some great gore effects and some surprises here and there. A little over-the-top at times, but generally fun and exciting without resorting to silly or brash. I might have given it a higher score if more women had featured, but the blend makes good sense for the time and setting. Just loosen any expectations you have and enjoy the ride.