Cam has an interesting and somewhat original premise that had the potential to be a sci-fi cult classic but is let down by its poor execution.

Cam has an interesting and somewhat original premise that had the potential to be a sci-fi cult classic but is let down by its poor execution.

On paper, Cam sounds like an intriguing film which ticks all the right boxes, but the film is a poorly executed mess and a missed opportunity for a B-Movie-esque cult, pulp novel thriller. The lasting impression of this film is frustration and confusion, as it leaves many questions unanswered and brushes them aside in order to rush its conclusion. What should have been a 40-minute episode of Black Mirror is stretched out for a 90-minute feature film which just feels bloated and stretched for the sake of it. Cam had so much potential that could have been improved upon if it had been a mini-series on Netflix, as there’s so much more that the director could have explored in the world of adult entertainment that has sadly been glossed over and ignored.

Drawing on her experience as a webcam performer in the online sex industry, screenwriter Isa Mazzei has managed to weave together a twisted tale of identity theft and digital doppelgängers, which sends shivers down your spine. The film centres around Alice (played by The Handmaid’s Tale’s Madeline Brewer) who runs a private (just for adults) live-stream channel under the alias “Lola.” Alice is a highly ambitious young woman, who is obsessed with boosting her lowly viewer ratings. Rather than reduce herself to full frontal nudity, Alice decides to conduct very dark and macabre stunts, including a fake throat-slashing suicide. Alice has a few devoted fans including Tinker (Patch Darragh) and Barney (Michael Dempsey) who border on the lines of stalkers, but they seem loyal and more importantly they pay out sending her gifts.

In a bid to challenge her live-streaming rival, Princess_X (Samantha Robinson), Alice breaks her self-imposed rules about always performing solo and never going fully naked. She humiliates herself by using a super vibrator (the other girls tell horror stories about how it can damage a woman’s ability to feel pleasure; this scene is a homage to the infamous “comparing scars” scene in Jaws, which adds a layer of comedy to the film). This scene hints at what could have been a better film, a critique of the adult entertainment industry, but instead, the film seems to gloss over this to hurry onto the next plot point. 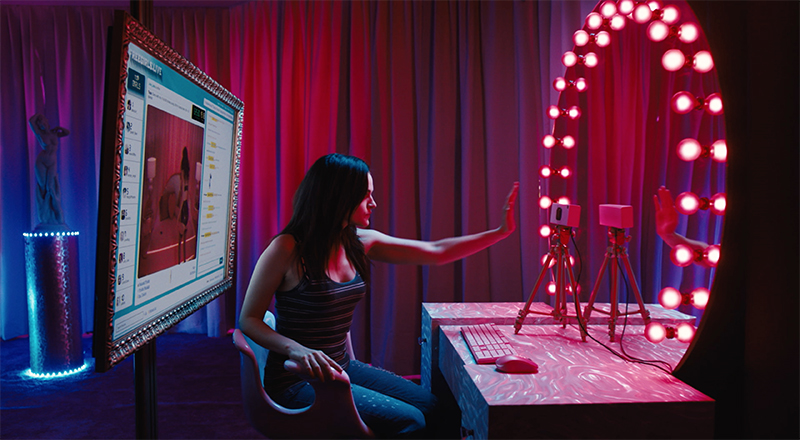 The next day, a dazed Alice is alarmed to discover she has been locked out of her live-stream account by an imposter who looks, talks and acts just like her (fake Lola) who has hijacked her online identity. This fake Lola is far more of a risk taker and puts on risky, exhibitionist acts (both sexual acts and pranks) onscreen. Alice’s secret profession is eventually revealed to friends and family, causing humiliation for her mother (Melora Walters). With limited help from the live-streaming company (who prove somewhat suspiciously unhelpful), and the police (one Officer makes a move on her) Alice is forced to take matters into her own hands. But who is the fake Lola? Is she a real rival with a genius for impersonation, or a supernatural ghost in the machine?

Mazzei’s screenplay feels a little like an incomplete final draft, and the film proposes such interesting comments regarding the adult entertainment industry and female empowerment, but the lack of clear direction leaves the viewer unsatisfied. The film may have benefitted from having a female director (Cam‘s director is Daniel Goldhaber, and this is his first feature film). Of course, this is not to say that Goldhaber’s efforts should be dismissed, but a female director may have focused more on the sleaziness of the industry and the exploitation of women, rather than simply skip over these aspects in order to push the narrative along. There is also a lack of motivation from Alice in terms of her reason for becoming a Cam Girl. It could have been an interesting exploration into third-wave feminism and female empowerment, but Alice’s background seems unexplored and ignored, aside from a couple of powerful scenes between her and her mother. The male characters are also very flat and lack depth. And Goldhaber could have devoted more time investigating p**n addiction and a lack of masculinity which is hinted at but is also glossed over.

Making resourceful use of its obviously modest budget, Cam certainly looks flashy and marks should be awarded to Daniel Garber’s editing and Emma Rose Mead’s production design. Alice’s bedroom studio, with its fluffy pink girly decor, is an embodiment of all straight males’ pornographic fantasy, and it helps to show the contrast between Alice’s drab “real” life where she lives mostly out of boxes after moving into a new house which looks cold and lifeless on-screen. Brewer makes a compelling lead and manages to capture this insecurity and loss of identity that her character is experiencing. Overall, Cam feels a little underwhelming, a film which is in such a rush to reach its climax that it inevitability blows its load too quickly.