Season 8 of American Horror Story comes to a thrilling conclusion in “Apocalypse Then,” where our beloved witches must finally face off with the Anti-Christ.

Season 8 of American Horror Story comes to a thrilling conclusion in “Apocalypse Then,” where our beloved witches must finally face off with the Anti-Christ.


This recap of American Horror Story Season 8, Episode 10, “Apocalypse Then”, contains spoilers. You can check out our thoughts on the previous episode by clicking these words.

Because of the frequently convoluted scope of the average American Horror Story season, the final episode often tells the truth of the season’s success. Much of Season 8 has relied on the fandom’s love of these characters and the sheer glee of seeing them all again in the same place. Much like Infinity War. And like Infinity War, there have been some stellar moments, along with some stumbles. Thankfully, “Apocalypse Then” will go down on the stellar side, redeeming the stumbling last few episodes.

Myrtle arrives at Geek-boy central where Mutt and Jeff are plotting the Outpost occupancy. A little Myrtle manipulation and Coco’s family has landed slots in Outpost 3, where we see Coco, Mallory, and Mr. Gallant journey in Episode 1. The purpose is to keep Coco, and more crucially Mallory, safe through the Apocalypse under the protection of an identity spell which will not just make them forget who they are; it will alter their personalities. Some blown dust through her tears and Cordelia alters Coco and Mallory, turning Coco into a Madison-knockoff who actively oppresses Mallory, the idea being that this will keep Mallory’s powers under wraps.

In the course of serving as new-Coco’s Uber driver, Madison discovers Dinah’s deal with Michael from a few episodes ago–breaking the Coven spell in exchange for her own talk show. While Madison’s ready to strike a match on the voodoo queen, Cordelia plans to keep Dinah safe until they can exact true punishment.

We revisit Mallory’s power revelation against Michael from early in the season. Madison, Myrtle, and Cordelia burst from the ground where they buried themselves to survive, having felt Mallory’s power surge. And return to the present where they revive their recently poisoned sister-witches. Turns out that Michael’s plan has one tiny problem–he didn’t manage to kill all the witches. He attempts to bargain with them to “bend the knee.” Cordelia isn’t having it. Dinah, however, is more than willing to take a knee for Satan, keeping her voodoo support from the witches. But Cordelia pulled a fast one after she met with Papa Legba a few episodes back. She traded Dinah’s soul for Coven’s original Voodoo Queen, Marie LaVeau. Which means Angela Bassett is back. She’s none too impressed with Dinah’s ways and makes short work of her in a quick slash to the throat.

A moment later, Madison opens fire on Michael’s beloved Miriam-bot, destroying it and temporarily subduing Michael. The hope is to allow Mallory to jump back in time and stop him completely at some point in the past. Before she can, Brock, Coco’s mutant boyfriend, stabs Mallory for taking his spot on the plane. Michael revives, exploding Madison’s head. Marie attempts to keep him at bay, but he rips out her heart, eating it even after Coco stabs him. With a quick neck-snap, Coco goes down. Meanwhile, Mallory is fading. All appears lost, or “f****d” as Myrtle warns Cordelia. 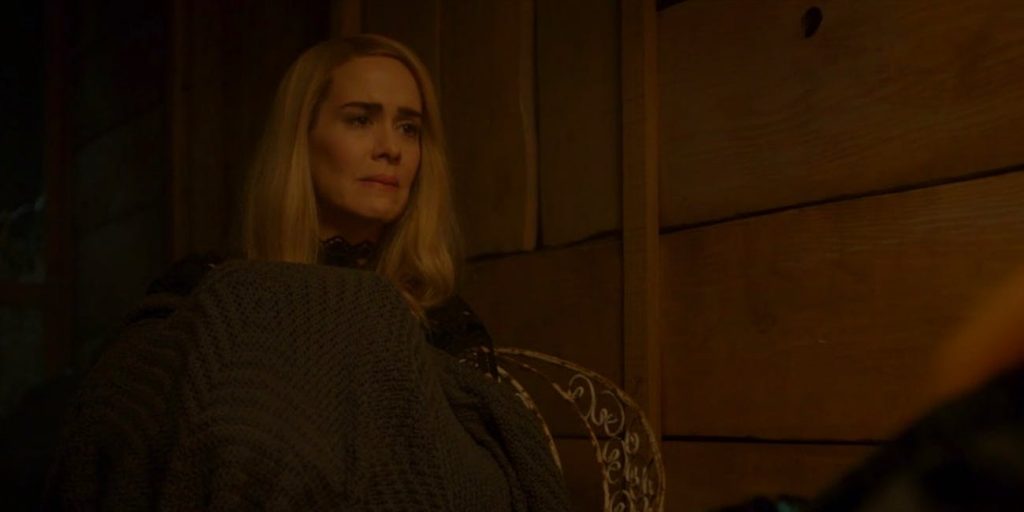 Michael and Cordelia face off, the anti-Christ believing he has triumphed. Cordelia warns him that he doesn’t fully understand what has happened and points out what became clear during his rise with the church of Satan–Michael is kind of whiny and not super smart about being the Anti-Christ. He prepares to kill the Supreme, but Cordelia summons his knife and sacrifices herself, flooding Mallory with power as she rises as the new Supreme.

Back in Murder House’s past, Constance lashes out at teenage-bodied Michael who has just killed a priest. She kicks him out, exhausted by his killing. He attempts to strangle her but cannot finish the job when she calls him a coward and storms out of the house. Just in time for Mallory to hit him repeatedly with a car. Constance rushes to his side as he dies, begging her to take him into Murder House so he can be with her forever. “Go to Hell,” she tells him, leaving him to die in the street.

The timeline returns to 2015 where Mallory enters the Coven where Zoe and Cordelia are still alive. Because there was never a threat of the Apocalypse, Myrtle was never resurrected. That is possibly more tragic than the world ending because Frances Conroy is the best part of this entire season. Because of how time travel works, Mallory is the only witch who knows the truth of what happened. She manages to keep Queenie from going to Hotel Cortez, undoing another death. Nan returns Misty as a thank you to Mallory from Papa Legba. Apparently, the underworld remembers, even if the witches don’t. Mallory even plans to retrieve Madison from Hell, at some point. Even though she knows what happened by her changing the past, but Mallory worries about the future.

In 2020, Emily and Timothy (remember those younglings from the Outpost? I barely did.) meet at a campus protest. One year later they have a baby. Three years later, their child is having behaviour issues that include killing the babysitter. Sitting in a rocking chair, we see that the Anti-Christ has been born again. Cue a knock at the door from Miriam and the Black Pope. Satan finds a way.

Sure there are some unanswered questions, but none so important that they distract. If “Apocalypse Then” has issues, it is trying to cram intense action into a quick couple of scenes, at times feeling rushed. And providing so little Angela Bassett (she should have been Storm in 2000’s X-Men. Period.) Given the time spent on previous episodes’ plot lines, the pacing of the back half of the season could have been better plotted. That being said, the season was a fun, entertaining, and often chilling romp in the world Ryan Murphy has given us, a reward for the fans who watch through spread fingers and cheer for our repertory cast as they delight and thrill us year after year.