Target has an interesting enough premise, but its awkward mishmash of genres and influences mean it fails to hit the bull’s-eye.

Target has an interesting enough premise, but its awkward mishmash of genres and influences mean it fails to hit the bull’s-eye.

Today, Netflix continues its burgeoning relationship with Indonesian cinema by dropping a double-bill, one of which is Raditya Dika’s comedy-thriller Target. It must be said, though, that the previously high standards set by The Night Comes For Us and May the Devil Take You aren’t exactly met here.

Blending meta-cultural commentary with genre thrills, the best thing about Target is its premise, which sees nine Indonesian celebrities playing twisted versions of themselves amassing to film a movie (also called Target) and finding themselves at the mercy of an enigmatic “Game Master” who assures them that the next 24 hours will be fraught with increasingly bizarre and deadly challenges and that only one of them will survive.

As far as hooks go, that’ll do. But the problems are in the execution. A knockabout satirical comedy plays awkwardly against a Saw-inspired thriller, and as a result, both elements feel half-baked and neither works in the way that it should. Comedy is subjective, of course, but beyond the gags being thinly-written, surface-level and mostly obvious, there’s an issue in cultural quirks being inadequately translated into English subtitles. It might just be me, but I never felt like I was laughing quite as much as I was supposed to be – if I was laughing at all. 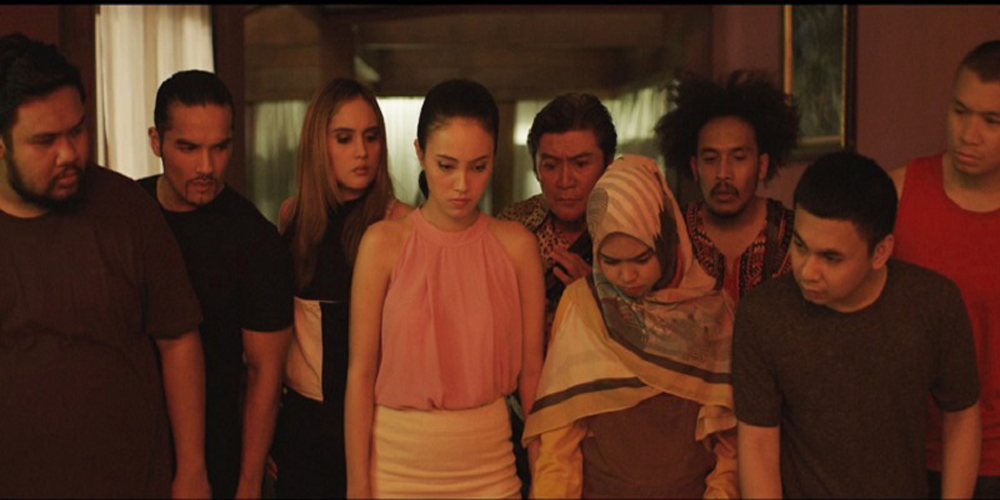 While Dika proves himself a solid experimental filmmaker, any potential commentary is wasted on empty plotting and two-dimensional characterisations; a better film would have leaned more confidently in one direction or the other, but as it stands Target feels like it’s trying too hard to multitask but not hard enough to make what it’s actually doing worth watching.

Raditya Dika, Cinta Laura Kiehl, Samuel Rizal, Willy Dozan, Abdur Arsyad, Hifdzi Khoir, Ria Ricis, Romy Rafael and Anggika Bolsterli play their roles enthusiastically, if not entirely convincingly, but the games they’re forced to endure don’t wring much out of them. In the end, the only people who feel as though they’ve been properly tormented are the audience.