Episode 6, “The Roundup”, becomes character focused rather than jumbling together a bunch of crime scenes, which serves The Rookie well.

Episode 6, “The Roundup”, becomes character focused rather than jumbling together a bunch of crime scenes, which serves The Rookie well.

This recap of The Rookie Season 1, Episode 5, “The Roundup”, contains spoilers. You can check out our thoughts on the previous episode by clicking these words.

In the latest edition of cops and robbers, the rookies and the training officers are pitted against each other once again, and this time, whoever makes the most arrests wins. The Rookie continues to serve up this idealistic police force, where chucking someone in a cell is symbolic of a video game.

Putting aside the usual cheesy dramatics and unavailing body cam shots, The Rookie focused on the breakup of John Nolan (Nathan Fillion) and Lucy (Melissa O’Neil), who only parted due to the invasive tendencies of their workplace.

John spends most of “The Roundup” sulking away while courageously trying to remain principled and morally correct about every scenario that comes his way. It’s so ironic that John does not actually need to work for the police force, and he’s doing this job almost as a hobby. Every time the scene switches to his luxury home, sipping alcoholic beverages with his friend, whinging that his sexy cop-girlfriend broke up with him to his equally well-off friend, I wonder if this is some kind of alternative universe where middle-aged rich people partake in law-enforcement activities. 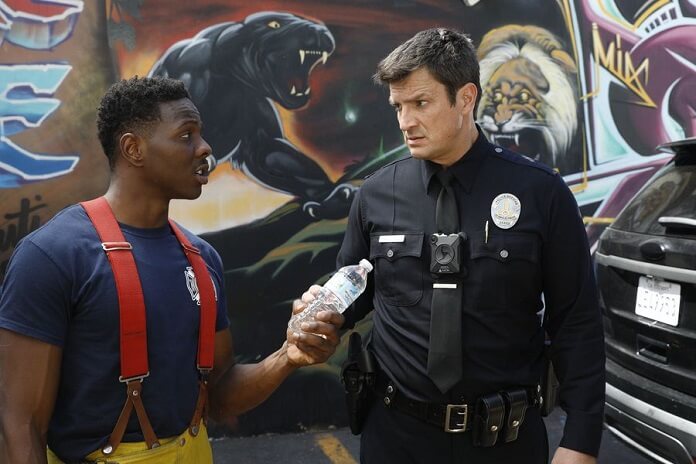 The problem with John in “The Roundup” is that he wants to win the competition of most arrests so he can impress Lucy, who spends most of the episode getting hit on by a thirsty firefighter, that makes John feel inadequate and insecure like a spoiled high-school wimp. Unfortunately, his training officer Talia Bishop (Afton Williamson) does not agree with this game and berates John all episode to prevent him from making it his priority. The Rookie Episode 6 becomes a game of trading personalities, where John is not concerned for the wellbeing of the public but yearns for his ex like a hurt puppy.

By the end of the “The Roundup”, poor well-to-do John Nolan realises that being a good police officer is a priority and he needs to swallow his pride with Lucy. Tim Bradford (Eric Winter) and Lucy win the competition, mostly because everyone felt sorry for him as he used to play this game competitively with his now doped-up estranged wife. As the credits drew closer, John and Lucy nervously recognise their breakup, but you can already tell they will passionately reconcile.

I’m sure this is no coincidence, but The Rookie served up its best episode yet mostly because it was character-centric, rather than a group of nonsense scenes in a day of the life of a police officer.