Fast paced and good looking, 1983 is a dystopian thriller that evokes Orwellian ideas of authoritarianism whilst developing its own characters and a gripping plot.

Fast paced and good looking, 1983 is a dystopian thriller that evokes Orwellian ideas of authoritarianism whilst developing its own characters and a gripping plot.

A dystopian thriller, 1983 is set in an alternative 2003. Poland is subject to totalitarian rule ever since a terror attack twenty years earlier which led to the installing of a dictatorial regime. A young idealistic law student pairs up with a grizzled and disgraced inspector to solve a murder and uncover a plot that will threaten the core of the police state.

This Polish drama is now streaming on Netflix and is well worth your time. Although the themes and plot seem to belong to the 20th Century they serve as a timely reminder of where we are today in our politics. This is a world in which characters are forced to consider whether it is better to have truth or justice; whether it is better to have security (or the illusion of it) or freedom. This is a world in which propaganda has convinced it’s citizens that they have it all, that “the party” provides them with the roadmap for success and the law gives them the guidelines to follow. We, of course, learn that the reality is somewhat different as the story unfolds.

Clearly, this show is drawing heavily on Orwell’s 1984 (the title alone is a homage to the novel). We are given numerous references to “the party”, there are a few great examples of doublespeak, and there are lots of “ministries”. My favourite reference, however, is when a police officer is handed a copy of 1984 as a banned text and can be found in the background of numerous scenes reading the book with a look of increasing horror as he gradually sees the similarities between his world and Orwell’s.

Despite appearing to echo political sentiments of the 20th Century, the idea of “Truth” being a subjective concept has never been more relevant. It is this fact, along with the rise of increasingly extremist politics, that makes 1983 feel relevant and important. 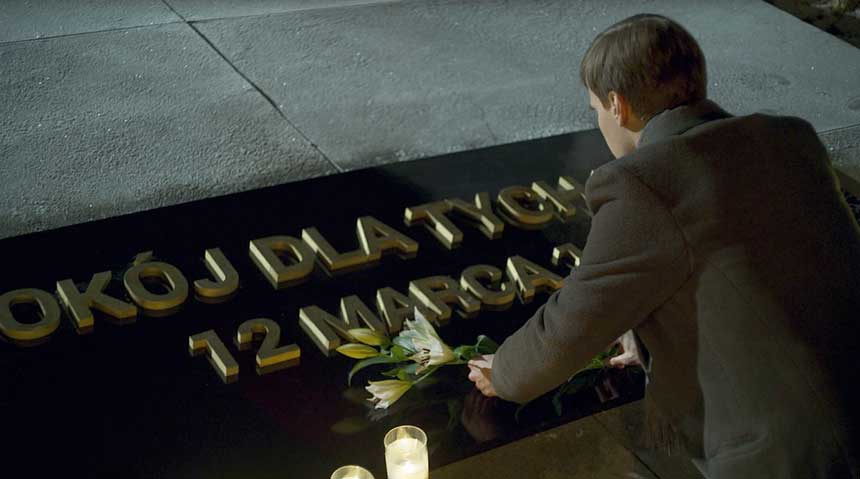 The script is incredibly smart. It is steeped in history and literary references but never beholden to them. There is a risk with a drama like this that you are beaten over the head with the fact that it is trying to reflect some wider societal trend. 1983 manages to walk the line very well; by setting it’s story in an alternative version of 2003 we are given enough real-world cues to believe in it, but the device gives the writers enough room to create a distinctive and unique world. There is a lot of plot to follow and the pace is quick; viewers need to be paying attention to fully catch what is going on.

The show looks fantastic. Unsurprisingly for a dystopia, the set design is dark and grey, reflecting the idea of an Eastern European dictatorship but without ramming it down your throat. Whilst there are signs of decay, plenty of characters are well dressed and there are also signs of economic success. The way that the camera moves throughout is also impressive, the occasional switch to a handheld camera makes the viewer complicit in the unfolding plot and the direction is consistently interesting. My only complaint is the sound dubbing; this is very clunky and distracting and about 5 minutes in I turned the sound to the original Polish with English subtitles, which was much better.

This is an unexpected gem from Netflix with lots of interesting themes that feel weighty and relevant. The characters are interesting and complex, it looks wonderful and for those of you with even a passing interest in politics, there is much to enjoy.