Monster is a British independent horror about a young woman abducted as a birthday gift. Interesting fare, with writing and production higher grade than the acting.

Monster is a British independent horror about a young woman abducted as a birthday gift. Interesting fare, with writing and production higher grade than the acting.


Monster is a nasty little low-budget indie horror film from the minds of Matt Shaw and Michael Bray, adapted from their novel of the same name. It is a simple story, taking place largely over one day and with very little background given: it is Andrew’s birthday, and his parents have invited a guest round and prepared a cake.

By “invited”, I mean abducted. And the cake isn’t exactly from a bakery.

Andrew (Mike Butler) is a grown man – no idea what age – but developmentally very delayed, and somewhat deformed as well. His mother Mary (Tracy Shaw) dotes on him and his needs, while his father Richard (Rod Glenn) is a downright unpleasant bloke who resents them both while playing along; whether to keep the peace or enjoy the fun, I couldn’t say. We know very little about Andrew’s needs, though: Richard and Mary may be misguided or may have nurtured something twisted into their son due to their own tastes. They lure and abduct people – usually young women – for him, and make a special treat of this on his birthday…

Consequently, I don’t know who the Monster is in this film, which has elements of both Castle Freak and Hounds of Love in its sparse plot. The only person we truly sympathise with is this year’s birthday guest Emily (Laura Ellen Wilson), who we meet after an extremely tense opening and some introductions to characters. The audience simply watches her dreadful day go from bad to unspeakably worse, with the briefest of glimpses of how bad it could get along the way. The two primary women are the best actors in Monster: Wilson’s Emily is someone to root for all the way through, and Shaw’s Mary comes across as much more complex than the script actually lets us see, both fragile and assertive, maternal and manipulated (I’m reminded of Hounds of Love again).

Apart from the variable quality of acting, the other flawed aspect of Monster was the use of background score: most of the time, there was no music at all; and then occasionally, for some brief narrative scenes, there was suddenly an intense instrumental backdrop. Either all or nothing and the transition was a little too abrupt.

The cinematography was sharp though, and production in general interestingly done. There were a few scenes with momentary (almost subliminal) images flashing amongst the dialogue to reinforce a message, most notably in an early scene and then again near the end. Also, a couple of times, it seemed the speaker was talking directly to the camera in a monologue, getting carried away with explaining their inner workings. In one of those scenes, the camera then turns to show an imaginary audience, so that the speaker gained reinforcement (almost justification) of his unpleasant approach. I just wish the acting overall had been a little better, as the presentation of the story was generally very good, and despite some familiar aspects, the plot was not predictable. 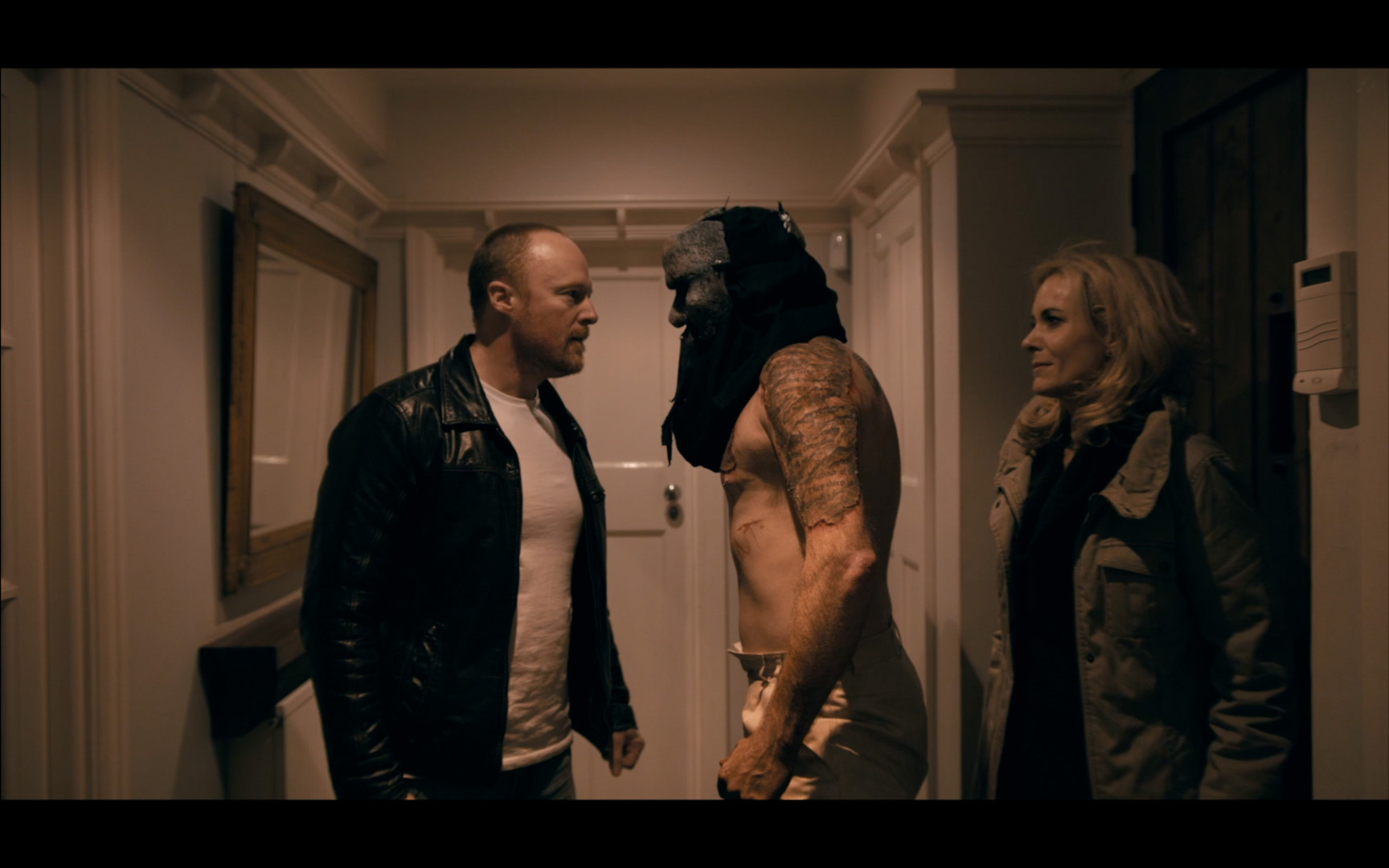 Interestingly, the director (Matt Shaw again) has issued a statement about the film, to go with the festival submissions:

The aim of MONSTER (based on the book of the same name) was to create a horror film which made the viewer a part of the crime. Have them sitting on the edge, watching in but unable to change the course of what was happening on the screen. This was never meant to be a comfortable film.

And I must say that worked: I wasn’t quite as sick at myself for enjoying the film as I was when watching Man Bites Dog (I still remember that feeling at the cinema), but I certainly had to force myself not to look away once or twice, despite the minimal application of actual violence and gore.

Monster came into existence as a result of a crowd-funding campaign, which concluded about eighteen months ago. It went from the premiere in June 2018 to Dead All Day festival winner in November 2018, and it’s now about to arrive on Amazon Prime. It is an obvious labour of love on the part of Shaw and Bray; not perfect, but personal. It won’t be to everyone’s taste, but then neither are their books, which are openly described as “extreme horror”. I confess I’ve not read the book this film is based on (though I’ve read some of Shaw’s short stories), so cannot comment on the quality of the adaptation. Monster will suit lovers of independent horror films, especially those who don’t mind letting their impressions brew slowly: it is not a long film, but there is plenty to think about after it is finished.

Full disclosure: I contributed a small amount towards the crowd-funding, though have no other connection to the filmmakers.