Pine Gap as a series provides a similar source of knowledge as does the real-life facility on which it’s based.

Pine Gap as a series provides a similar source of knowledge as does the real-life facility on which it’s based.

Pine Gap — created and written by Greg Haddrick and Felicity Packard — stars Parker Sawyers (The Autopsy of Jane Doe, The Mummy) as Gus, an American officer who is a floor leader for one of the information gathering units. While his position within the facility is a desired one, apparently a boon for those in the American intelligence community, he becomes the envy of no-one when, during his watch, a civilian plane is shot down not far from where the president is having negotiations in Myanmar. Not only does this act causes the death of those in the plane, but it causes Gus to be demoted and relations between the US and Australia to stiffen. Both the demotion and the stiffened relationship between the US and Australia cause a new lead to be brought in. This new lead has a shadowy past, and both countries begin having trouble trusting each other as circumstances lead to them wanting to keep secrets. Sawyers is joined by Tess Haubrich as Jasmina, Jacqueline McKenzie as Kath Sinclair, and Steve Toussain as Ethan James.

Pine Gap is a facility in Australia where the United States and Australia share intelligence gathering operations. It is said that the work done at the facility was responsible for some of the most important informational breakthroughs in history, including helping Reagan defeat the Soviet Union, all of which exemplifies the strong alliance that exists between the US and Australia, one perhaps nearly as strong as the renowned special relationship shared between the US and the United Kingdom, the place where the other of the three US intelligence outposts is located. This, of course, provides ample fodder for an exploration of an entire host of subjects, such as American imperialism, American hypocrisy, American citizens abroad and longing for people who share their same sense of the world. 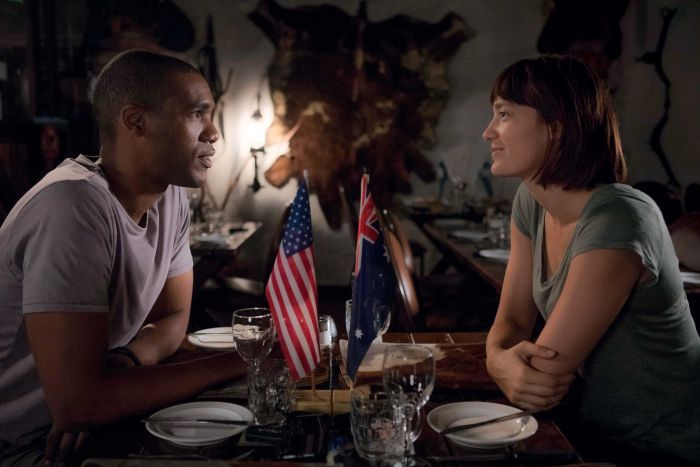 And these three subjects are ones from which the series does not shy away. Consider American hypocrisy. At one point in the show, it’s said that China is claiming jurisdiction over islands in the South China Sea (as they are doing now), possibly making war with the larger world more imminent. When an American says that he hates that China is being so provocative by laying claim to the islands despite everyone else’s objections, an Australian simply responds to him with the comment: “Hawaii, anyone?” The American doesn’t exactly get upset but instead reminds the Australian that the governments of China and the United States are different, with China imprisoning all dissidents to its governing body while America’s congress doesn’t.

Another great example of a subject the series discusses is how the US defeated the USSR during the Cold War. One character perfectly explains that the reason the US ultimately triumphed was that there were breadlines in the USSR, which means that the country inadvertently dispirited its own people. There are even more clever little criticisms of the US scattered throughout the series, which I appreciated, not because I believe all of them are correct but because I think Americans should hear them in order to provide more robust defences. I was surprised at how accurate some of the comments were regarding the US, and especially impressed with how seamlessly they were integrated into the drama of the plot.

There are not many pieces on the screen, big or small, that are like Pine Gap, but similar pieces are becoming more numerous given the nature of our world requiring intelligence be more centralized. That said, the six-episode series follows the formula of the genre to a tee, without perceptible innovation and without much spunk, which may or may not mean that it’s great. I can’t tell. But what I can say is it’s better than average and that those able and willing to delve into a small sector within the realm of centralized intelligence should see it.