Not just the second in a planned trilogy of Guillermo del Toro’s family-friendly fantasy adventures, 3Below: Tales of Arcadia is a timely commentary on immigration.

Not just the second in a planned trilogy of Guillermo del Toro’s family-friendly fantasy adventures, 3Below: Tales of Arcadia is a timely commentary on immigration.

Popular media is rife with heavy-handed socio-political message-mongering these days, but it’s just like I always say – if you need something doing, you might as well just get Guillermo del Toro to do it really well. Thus we have 3Below: Tales of Arcadia, the second in a planned trilogy of family-friendly animated series’ that began with Trollhunters and will conclude next year Tales of Arcadia: Wizards. So, you have that to look forward to.

In the meantime, 3Below: Tales of Arcadia isn’t really about wizards, but rather royals. Aja (Tatiana Maslany) and Krel (Diego Luna) are aliens forced to pose as Earthlings after crash-landing in Arcadia with their royal bodyguard, Vex (Nick Offerman). It’s a fish-out-of-water comedy with a spicy undercurrent of timely social commentary, then, as del Toro and Rodrigo Blaas, who executive produces alongside Marc Guggenheim and Chad Hammes, regale younger viewers with a more palatable immigrant experience to properly convey important moral lessons that are becoming a little cloudy in our current tumultuous political climate.

It’s a good, necessary concept. You have to start while they’re young, as people say, and it’s no bad thing to have our youth be tricked into absorbing the idea that moving from one place to another doesn’t make you inherently evil, as a lot of mainstream news media would have you believe. Having the protagonists be royals fleeing a civil war is a particularly inspired direction in which to take 3Below: Tales of Arcadia; it speaks to the nonsensical fact that a not-insignificant number of people believe that someone flees a war-torn country where they were, say, a tradesman, because selling knock-off aftershave in nightclub toilets somehow provides a better life. 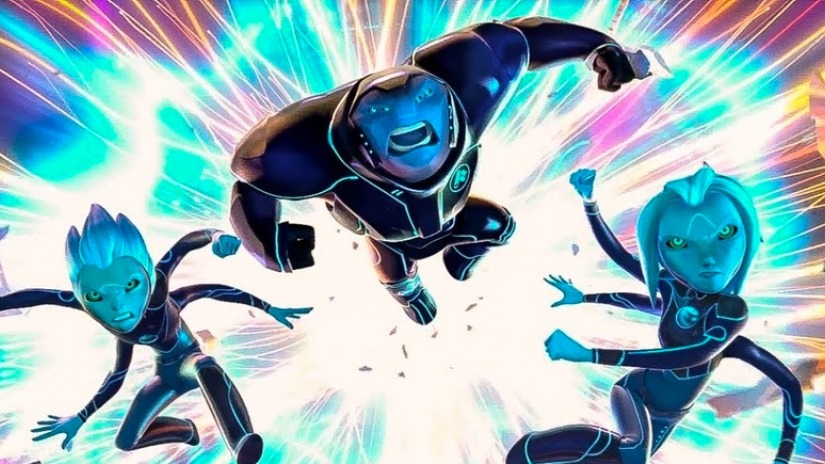 It isn’t all political, though. At its heart 3Below: Tales of Arcadia is about family and the notion of home; how the two are malleable, and how one doesn’t always contain the other. The relatable thematic underpinning is that uprooting your life and replanting is elsewhere is a terribly anxiety-inducing experience that many people have to go through, but ultimately what makes a home is the people you fill it with.

In this case those people include Glenn Close, Andy Garcia, Nick Frost, Chris Obi, Uzo Aduba, Tom Kenny and Danny Trejo, which certainly helps. 3Below: Tales of Arcadia might be a show aimed at kids, but the big-name voice cast and the who’s who of DreamWorks animation betray more ambition. This is a big, serious project, and it’s a step up from Trollhunters visually, retaining the same team and broad style but operating in that familiar mode you only achieve once you’ve had a while to figure out where your strengths and weaknesses are.

And then there’s del Toro, the Oscar-winning master who reportedly maintained a closer connection with the production of this show that he did with Trollhunters. His fingerprints are everywhere, and his typically high quality of filmmaking has bled through into the show’s direction of actors and staging of set-pieces and comedic beats. 3Below is as well-acted, well-written and culturally relevant as you might expect from something with his name attached, whatever the extent of his involvement, and that it’s targeting entire families with a positive, inclusive message can only be a fine thing. The kids will be entertained, which is obviously what you want, but they might also come away from 3Below: Tales of Arcadia understanding the world and the people in it just a little bit better.