If you walk in late for Holmes & Watson, no worries. Rest assured the same three jokes will be repeated over and over for the entire 90 minutes.

If you walk in late for Holmes & Watson, no worries. Rest assured the same three jokes will be repeated over and over for the entire 90 minutes.

I went to see a film this past holiday weekend with family, and there was no sound for the first ten minutes or so. Luckily, they fixed the issue and restarted the movie, so we didn’t miss anything (Vice; the obvious joke would be to say it may be the best way to watch it, but it was needed to keep up with the film). If the same thing happened in Holmes & Watson, you might miss the first joke or two, but rest assured, the same jokes will be repeated, almost on an endless loop, whether you like it or not.

Sherlock Holmes is now played by Will Ferrell, who brings his trademark naive buffoonery to the classic character. In contrast, Watson is played as a lap dog with a childlike innocence by longtime Ferrell co-star John C. Reilly. They are ordered by the Queen herself to investigate a murder at a surprise party for Holmes at Buckingham Palace. They must solve the case and catch the killer, or the Queen will be the next victim. Their fans think they are using their wits and brilliant crime-solving methods to solve the case. Yet, this film is a comedy. They fall face-first into clues with the help of an American doctor (Rebecca Hall) who takes a liking to Watson. 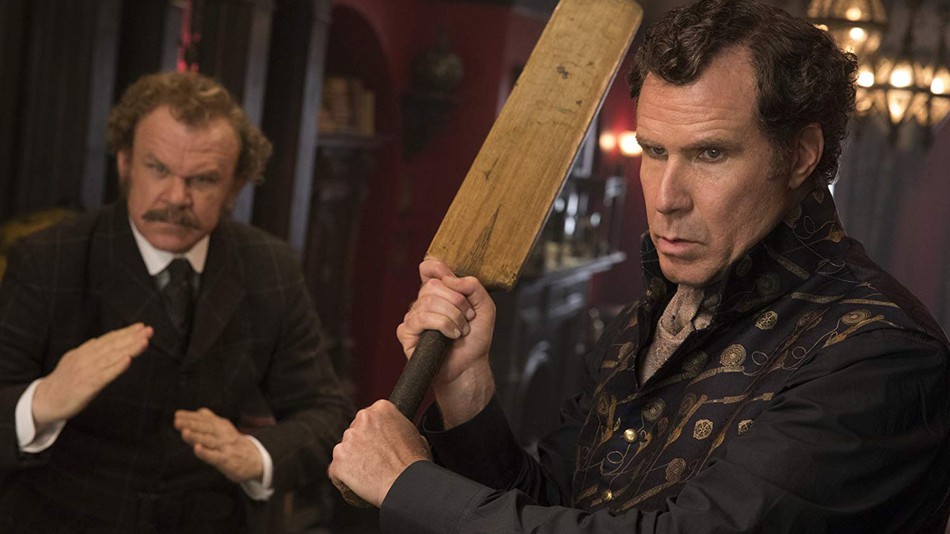 This farce (bordering on spoof) was written and directed by Etan Cohen. The man behind another more effective Will Ferrell comedy, Get Hard (not that it’s a high bar to jump over). This most recent collaboration takes three jokes (outdated medical methods, male chauvinistic attitudes, and the joke that Holmes is not a competent detective). They are told repeatedly until the film finally ends at a merciful 90 minutes. This method has been used in other films that have worked, and sometimes even the jokes can get better. However, with this latest outing, the first round of gags is just not that funny or even well-executed. This was a serious miscalculation by Ferrell and company; you must know the punchlines will land to tell the jokes repeatedly. The result comes across as lazy; they almost all fall flat and are duller than you might expect.

I was never a fan of Stepbrothers, and I found Talladega Nights funny until it became grating. Still, Holmes & Watson set a new low standard for this comedy duo and producer Adam McKay. Ferrell is no longer a sure bet for comedy gold returns and needs to be careful with his next project.