The Last Boy starts with an attractive, ambiguous premise, but falls apart with wooden performances and a lousy script.

The Last Boy starts with an attractive, ambiguous premise, but falls apart with wooden performances and a lousy script.

At the beginning of The Last Boy, Sira (Flynn Allen) is talking to his mother, who is seemingly dying. The environment they reside in is still, almost a feeling that the world is dead. His mother asks him to go on a quest so he can grant wishes.

All this peculiarity, the atmosphere of a post-apocalyptic movie, is ruined almost instantly when the young boy meets a girl, who is innocently asleep on a haystack. The girl speaks to Sira in a wooden tone, and he is oddly neutral about a situation where someone wants to join him on his journey for no reason whatsoever. I could not gather whether it was the story or the direction of the children cast that was the issue.

The Last Boy has this plot device which unfortunately has an end product of bad special effects. Sira has this gadget, which stops the “wind” from taking his life. You know little about the “wind” for most of the movie, but if you are hit by it, then you turn into what looks like stone, and you essentially die. The story delves into The Walking Dead–type scenario, where a gang of onlookers who run a refugee camp seek the help of Sira due to his ability to make his device work. The Last Boy spends a good portion of the film in this place of refuge. 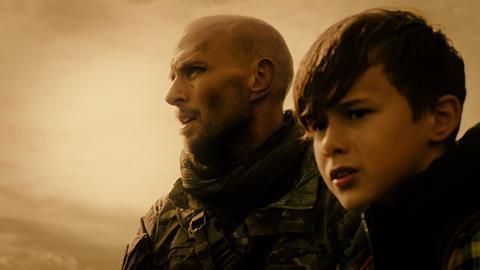 Surprisingly, the adult actors are just as wooden with their performance. I believe it is the script because at specific points the actor/actress did not look enthused by what they had to perform, almost like the writing was so robotic that they did not feel it was necessary to drive it home. Nearly everything is a question or a nonsense remark; every character has no clue to what world they sit in.

Maybe The Last Boy relies on the innocence of a child for too long, but I was looking forward to watching this movie. The premise was appealing, giving that now meme’d Bird Box vibe. My only worry now is that some mainstream and indie filmmakers are going to try and replicate that A Quiet Place effect, where you can get away with a lower budget, but the story is more important about how the environment or incoming danger can hurt the characters. It’s strange that The Last Boy wanted to emphasize the special effects because, like Bird Box, they could have gotten away with the “wind” and unconvincing deaths.