“Standoff” puts all the characters in a sticky situation, and is yet another consistent episode of The Rookie.

“Standoff” puts all the characters in a sticky situation, and is yet another consistent episode of The Rookie.


This recap of The Rookie Season 1, Episode 9, “Standoff”, contains spoilers. You can check out our thoughts on the previous episode by clicking these words.

I’m not sure if my tastes in TV are reducing in quality, or if The Rookie is maturing. The characters feel more bedded in, the story feels a little more productive, and each episode ends with some open ends that make you think to next week. Chapter 9, “Standoff” is by no means the best episode in the series, but for once there was some consistency and continuation. Or maybe like all TV shows, once you get used to the characters and the product of the story, you feel more natural in accepting it. Either way, The Rookie does not ruin the day at present.

The main issues of the last episode are still brewing; John Nolan (Nathan Fillion) is recovering from killing a criminal and then the home invasion that quickly ensued afterward. The predicament that he faces is that the police now need to clear him of any wrongdoing after the home invasion. He is innocent, but the scenario is laced with the fact the man who attacked him is the brother of who he killed. And the stickler; Lucy (Melissa O’Neil) was at his home at the time, at 1 am in the morning, naked and dripping from using his shower. The on and off couple do not want the police force to know that they have had or they are in an evolving relationship.

As usual, John is gripped by the very thought of lying to his peers. He is so kind, so principled, that every situation throttles him into an emotional state. Lucy, on the other hand, is cool about it — insisting that the truth cannot be revealed and that his statement needs to stay the same. John, unfortunately, has a very suspicious investigator, who notices he wasn’t wet but his shower was used. 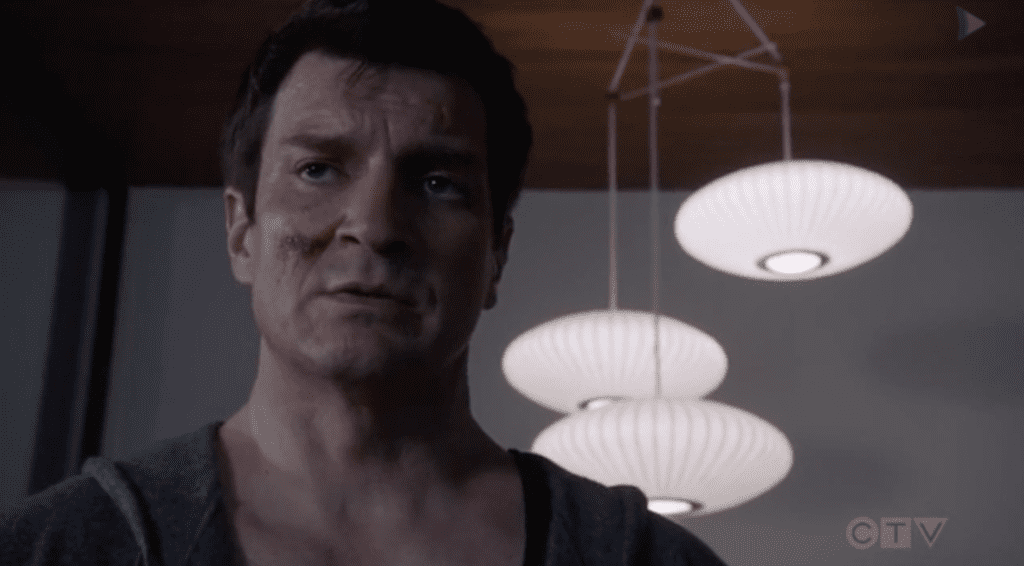 The aftermath of John and Lucy’s late night snuggling was not the main event in “Standoff”, but the repercussions of Tim Bradford’s (Eric Winter) wife getting shot by a drug gang leader, causing the husband to force the hands of the police force to track down the man responsible and make an arrest. The rookies and the training officers put together a team to arrest the man (except John who has been temporarily assigned to a reception desk). They ended up trapped in a standoff, caught in the resident’s apartments because the gang leader has riddled the block of flats with signal blockers and made sure his men are strategically placed on the corridors.

Lucy had to step up outside the usual duties of a police offer in “Standoff” because the gang leader’s girlfriend was heavily pregnant, and during the exchange of gunshots, she went into labour – Tim has to keep things calm until the woman fully gives birth. Eventually, they find a way to get rid of the signal blockers and are able to call in additional support, and eventually, after a tense 20 minutes, the danger is eased. I do wonder if Tim will eventually get his wife back; there must be some light at the end of the tunnel for him?

“Standoff” ends with John cleared of any wrongdoing for the home invasion, making him feel guilty for not confessing that Lucy was there. He goes back to his fancy middle-class apartment, sipping a beer, looking at the view from his balcony. Lucy turns up, asking if now and again they can talk, which he agrees. These two characters are so naive. It’s like they never learn. Episode 9 gives a little closure to both stories, but hopefully, The Rookie can continue riding a good story from here. Let’s see.