Grace and Goliath is a light fish-out-of-water drama set and made in Northern Ireland, with more heart than clichés.

Grace and Goliath is a light fish-out-of-water drama set and made in Northern Ireland, with more heart than clichés.

Early last year, I reviewed a film about an American film star who fell for a young man and his working-class family in 1970s Liverpool, despite being quite different people. Grace and Goliath has a similar fish-out-of-water premise, but unlike Film Stars Don’t Die in Liverpool, this film is fiction, a drama, rather than a biography; and set in Belfast, instead of Liverpool. The family he stays with is just as natural, the film very entertaining, and almost as emotional.

On the surface, Grace and Goliath is about Josh Jenkins (Emy Aneke), an American actor who goes to visit Belfast to make a new film, only to find himself staying with a local family (instead of a posh hotel) when his funding falls through. Underneath, it is also about finding a place to belong, and about people supporting each other through crises, which gave Josh that sense of belonging.

Josh’s character is well-written: he starts off a “stuck -up scumbag” and softens as he comes down to Earth, surprised at how comfortable it is. It’s only in retrospect that the extent of his development seems a little far-fetched, but just a little. The family is terrific: in contrast, very natural. It is made up of Lily (Olivia Nash): mother of Mel (Aoibhinn McGinnity), in turn, mother of three. They are utterly Belfast people, live in a small, cluttered house, and eat baked beans with potato waffles. It’s a family that faces issues under Lily’s warm wing, with an estranged father on the periphery and mental health issues within. Josh struggles to relax there and feel at home, though over time, her struggles not to.

The cast does a fine job, none of them brilliant, but all ideal for their roles. One of them stood out, mind you: Aoibhinn McGinnity, who played Mel. She had a very broad role, and McGinnity played it with care and apparent ease. (I realize I’ve not mentioned Grace herself (Savanna Burney Keatings), the youngest in the family, but she was more a plot device than a character: you’ll see.)

This is starting to sound kind of serious, though it only is kind of. There is a lot of humor (especially in minor characters, such as hotel staff, and family friends), and even when humor is absent, the tone is still very light. This is a feel-good family drama, particularly if your family is from Northern Ireland. The second half does feature a good deal of tension and emotion, mind you (I nearly cried!), but deftly applied, so that the contrast doesn’t stand out at all.

Grace and Goliath was directed by Tony Mitchell, whose experience seems to be mostly documentaries and bible stories, so the engaging-rather-than-exciting tone makes good sense. It was written by Maire Campbell, who won a Rising Star award when the film screened in the USA; and you can tell it was written about her home. 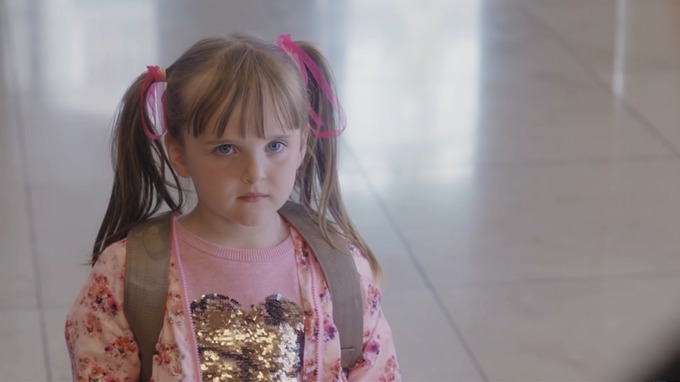 Grace and Goliath’s main locations were Belfast and the raw north coast of Northern Ireland and it was funded by a range of public and private bodies across Northern Ireland. The film was produced by Cinemagic, a charity who saw over thirty young filmmakers through a production training course which resulted in the final film: it’s a regional labor of love and could be seen as a public service broadcast about the region, though it does have a very engaging plot too. Sure there are a few too many short scenes where the locality is the star; but even without that regional focus, a film of this sort is bound to have some set pieces (usually to music) where the leading man/woman gets to know the local people and find himself adoring the place despite himself.

I enjoyed Grace and Goliath a great deal. I confess I didn’t expect to, because of the poster: it looked like one of those twee/misguided comedies about a tough guy whose heart is softened by a brattish child, but it wasn’t like that at all. It was endearing, without being saccharine, which must be a tricky line to navigate. My only niggle while watching it was the occasional use of Bible references, as though Christian faith was what enabled Lily’s helpful nature. I thought surely this is about people’s inherent good nature, not religion… though I then realized religion may well be a natural part of that community character; which can’t be separated from the people in a film of this sort, any more than tradition can be separated from Japanese people in anime.

Grace and Goliath was clearly made for a Northern Irish audience, with many local extras and celebrities featuring. And the viewer gets to know Belfast people more than the city itself (as though the city is familiar enough to be taken as read). As an outsider (I’ve visited only once), though, it was no less enjoyable, though I did distinctly feel like an outsider.