A near-perfect finale brought Season 2 of The Punisher to a fitting conclusion, and if “The Whirlwind” is the last we’ll ever get, Frank went out on a high.

A near-perfect finale brought Season 2 of The Punisher to a fitting conclusion, and if “The Whirlwind” is the last we’ll ever get, Frank went out on a high.

This recap of The Punisher Season 2, Episode 13, “The Whirlwind”, contains spoilers. You can check out our thoughts on the previous episode by clicking these words.

This is it, folks. We’ve reached the end – and together, no less. If you’ve stuck around through all of these recaps, bless you. I hope you’ve enjoyed the chaos as much as I have. But there’s an hour of it still to go, so let’s get to it.

Billy, having seen the love of his life splatter on the ground in front of him, bursts into the apartment in a rage. But Madani is waiting for him, and manages to shoot him three times before he’s able to unceremoniously strangle her – presumably to death. “The Whirlwind” begins.

The Schultzes, Eliza and Anderson, realise that the end is approaching. But they also determine that Pilgrim is “damaged goods” and can’t be allowed to return; after essentially sacrificing his life for them, they’ll raise his children as their own, presumably to mould them into the perfect political candidate that David, with his pesky homosexuality, could never become. But David is on the phone. Frank has him held hostage, of course, and if he doesn’t get Amy back, he’s going to kill him. The Schultzes might be evil, but they love their son, so they call Pilgrim and tell him that if he doesn’t retrieve David, they’ll kill his children. How delightful.

Pilgrim, of course, doesn’t have Amy, who Frank wants to exchange for David, but he lies and says he does. He’ll have her soon, though. As it happens, “The Whirlwind” reveals that she didn’t try to kill him on her own. After having learned her lessons throughout the season, she instead text Frank with the location of his room. Frank and Pilgrim have an awesome shootout through the hotel walls, but Pilgrim is able to snatch Amy and make off with her, so the exchange will take place after all. Only how can it? When Frank returns to the trailer, Curt and David aren’t there. In a final moment of guilt, Curt handed him over to Mahoney.

You can understand it, really. Both men were inadvertently caught in a situation they couldn’t get out of. “I started out trying to do the right thing, but now I just want to go home,” says Curt. “You and me both,” replies David. It makes sense. And it also makes the parallels between Frank and Pilgrim all the more explicit; now it’s Frank who is forced to pretend he has a captive that he really doesn’t, all to protect Amy – not his child, per se, but close enough.

Pilgrim tells Frank about his sons, and you see the understanding in Frank’s eyes. Frank tells Pilgrim that he’d do anything for Amy, which clearly breaks her a little bit, and Pilgrim lets her go. Both men can barely stand. But this is between them. I really like the dialogue in “The Whirlwind” here:

“I understand you didn’t have a chance to save your kids.”

“If you had, what would you have done?”

“I’d have done anything.” 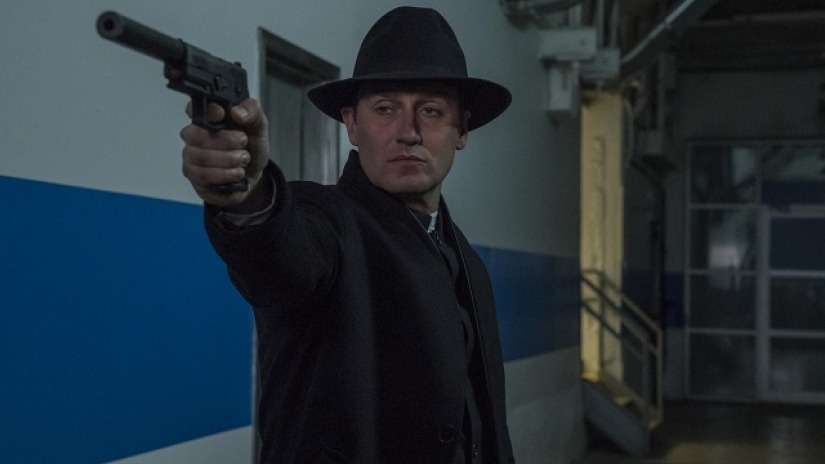 It’s a great exchange because it solidifies the similarities between the two men; yet somehow Frank is the hero of the story and Pilgrim is the villain – or perhaps another victim – despite them doing what they’re doing for the same reason: to protect the people they love. I never expected to feel this way about Pilgrim, whose character initially felt naïve and unconvincing to me. But it has become clear throughout the season that he isn’t blindly adherent to his faith; he clings to it so desperately because he’s terrified of who he might become – of who his sons might become – without it.

And so they fight.

It’s a desperate fight between two people who barely have the energy to fight at all, and Frank, of course, emerges victorious. But it’s also a weirdly sad and strangely inevitable fight; two different paths inexorably coming to a head for what are, mostly, the wrong reasons. Both Bernthal and Stewart sell every aspect of it, the emotion and the physicality, and when it’s over Pilgrim calls all the way back to the third episode: “I know who you are. You’re the whirlwind.” In a way, he predicted his own fate.

I haven’t mentioned Billy yet. After being shot by Madani, he’s rapidly bleeding out. Seeking the help of a shady backroom surgeon he attempts to have the bullets removed without anaesthetic, but passes out from the pain. When he wakes up, the doctor has dumped him in a bin. His bitter laugh says it all. Desperate, he drags himself to the basement where Curtis hosts his group therapy sessions, and calls Curtis. He doesn’t want to die alone. And if anyone might be willing to let bygones be bygones, just for a moment, it’ll be Curtis.

Turns out even Curtis’s forgiveness doesn’t extend that far. It’s Frank who arrives in the basement to see Billy off. He unceremoniously shoots him and leaves without a word. Later, Madani, who survived Billy’s attack, Mahoney and Curt arrive and basically agree to cover up the fact that it was Frank who finished him. Maybe Madani shot him five times, rather than three. “What about Castle?” asks Mahoney.” Madani and Curt reply together: “Who?”

Who indeed. There’s one last loose end to be tied up in “The Whirlwind”. Frank and Amy pay a visit to the Schultzes, and Frank shoots Eliza at the dinner table. As her brains seep into the wood, they play Anderson the recording of him admitting to his crimes, and threatening to commit more. In 24 hours Amy is going to walk into the New York Bulletin with all that evidence and start talking. Now, he has a choice. He can take the gun and the bullet that Frank has given him and kill himself. “Or you can live. But you live with the truth.”

Outside, as Frank and Amy part with Pilgrim and his sons, who are now in his care, a single gunshot rings out in the night.

It’s time for goodbyes. In an incredibly touching scene, Frank says farewell to Amy. He has set her up with money and a friend of his who runs a dive school. But it’s also time to say goodbye to The Punisher, which, thanks to Netflix, will inevitably be cancelled now. It was a great show among other great shows, and it’ll be missed. But at least this second season – which, on the whole, was pretty excellent – managed to bring things to a resolution. The final scene of “The Whirlwind”, and of The Punisher, is of Frank in the full gear, being what he’s meant to be. Hopefully he’ll get the chance to be that again.