“Rebirth” was another strong episode of Nightflyers, continuing to put the crew through the wringer and delivering some intriguing plot swerves as the series heads towards a conclusion.

“Rebirth” was another strong episode of Nightflyers, continuing to put the crew through the wringer and delivering some intriguing plot swerves as the series heads towards a conclusion.


This recap of Nightflyers Episode 8, “Rebirth”, contains spoilers. You can check out our thoughts on the previous episode by clicking these words.

Just in case you’ve forgotten, the previous episode of Nightflyers ended with Tessia (Miranda Raison), Captain Roy Eris (David Ajala), and Dr. Tobis (Gwynne McElveen) stuck under quarantine in the med bay after Tessia’s new-born baby disintegrated into an ashy alien husk. Fun! Such is how we open the eighth episode, ominously titled “Rebirth”, as Rowan (Angus Sampson) and Karl (Eoin Macken) peer helplessly through the glass as the detainees attempt to puzzle out how they’re going to prevent the nipper’s extra-terrestrial infection from spreading throughout the ship. Extra fun!

Of course, this isn’t fun at all, but Nightflyers certainly has a handle on “uncompromisingly f*****g bleak” as far as tone is concerned. Things elsewhere on the Nightflyer are equally f****d. Thale (Sam Strike) and Agatha (Gretchen Mol) are being driven bananas both by proximity to each other and the encroaching Volcryn object, and Lommie (Maya Eshet) is still bricking it about young Cynthia (Brielle Olaleye) running around all carefree behind the system’s firewalls. If she’s still kicking that means her grown-up alter-ego (Josette Simon) can’t be far behind – a fact that isn’t lost on Auggie (Brian F. O’Byrne), who hasn’t forgotten that he’s in love with her and wants to restore her control of the Nightflyer, even if the show itself did for a couple of episodes. 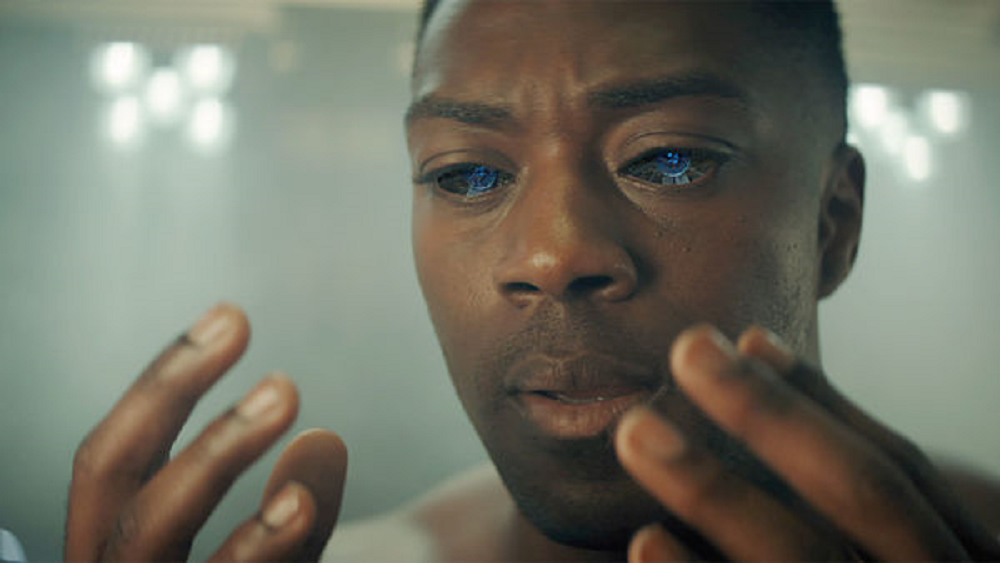 The problems in “Rebirth” are divided about equally between alien interference and the crew being almost exclusively delirious blabbermouths. Karl rats to Melantha (Jodie Turner-Smith) about Agatha being a telepath, which only deepens Melantha’s suspicions that everyone is losing the plot, including Karl, who is continuing to communicate with his dead daughter (Bronte Carmichael) and gradually coming around to the idea that she might be real. Oh, Karl. Haven’t you heard about the aliens, mate?

Lommie, meanwhile, ventures back into the computer and to Greywing Manor, where she predictably finds not only little Cynthia, but big Cynthia and her bigger, badder father with the gouged-out face. Knocked out and left to experience Cynthia’s “hell”, Lommie is temporarily out of commission, while Cynthia has a brand new body to stroll around the Nightflyer and cause mischief with. I’m sure that’ll result in nothing but positivity and wellness.

Speaking of which, by far the less irritating developments of “Rebirth” occur in the med-bay, where Dr. Tobis is rapidly infected by the lingering black mould and starts going into shock. Rowan is able to hastily concoct an antidote, which seems to work but predictably doesn’t, leading to the good doctor exhaling a cloud of black smoke and the idea being floated of a complete decontamination – a process that would annihilate everything within the quarantine zone. Oh, George is at it again, is he, culling half his cast at once? Well, not exactly. Things obviously go pear-shaped, and Eris has no choice but to order the quarantine, which does indeed vaporise Tessia, Dr. Tobis and the remains of the infant. But Eris is left alive, although when he peels back his eyelids his sockets reveal some kind of circuitry. So, what, he’s a robot now? This show is properly mental.