Bold, sumptuous Brazilian thriller/satire about power between classes, and within relationships. Shorter than it seems, not as gory as it seems, both entertaining and thought-provoking.

Bold, sumptuous Brazilian thriller/satire about power between classes, and within relationships. Shorter than it seems, not as gory as it seems, both entertaining and thought-provoking.

This is a film full of color and sleaze, style and sunshine. Yes, some killings and blood, as you would expect from a title like The Cannibal Club; but it is all delivered with supreme class… and that’s largely what the film is about.

The Cannibal Club focuses on wealthy Gilda (Ana Luiza Rios) and Octavio (Tavinho Teixeira), who toy with and consume the fit young men who work for them, seemingly as part of their marital co-dependent bond. By day, Gilda is a lady of leisure and Octavio runs a security firm. At night, they have their seedy, private fun sometimes; and other nights, Octavio goes out to his club for like-minded men. Cannibalism is both a private and a social affair in The Cannibal Club, but however it is conducted, it is secret, and secrecy comes with risks.

The Cannibal Club is described on IMDb as “comedy, horror”, but I firmly disagree with that label: to me, it is a satire in the form of an entertaining (and yes, bloody) thriller. There is nothing which seeks to scare us in this film, and more to smile about than laugh. Yet like all good satire, it is pretty unnerving if you dare to think about it for too long; and there are some lovely moments of humorous timing. A scene towards the end reminded me of the “A Quiet Night In” episode of Inside No. 9: carefully choreographed and not quite farcical.

The thriller element of the film is a fairly simple and lightly tense plot about secrets and unspoken threats. Early on, the chair of the titular Cannibal Club (Borges, played by Pedro Domingues) declares that the venue for the next rendezvous will be revealed only half an hour before the event begins because one of the members has been indiscreet… and that member does not make it to the next event. So when Gilda happens upon Borges’ own secret, it’s not unreasonable that she and Octavio do what they can to mitigate the risks they themselves face. 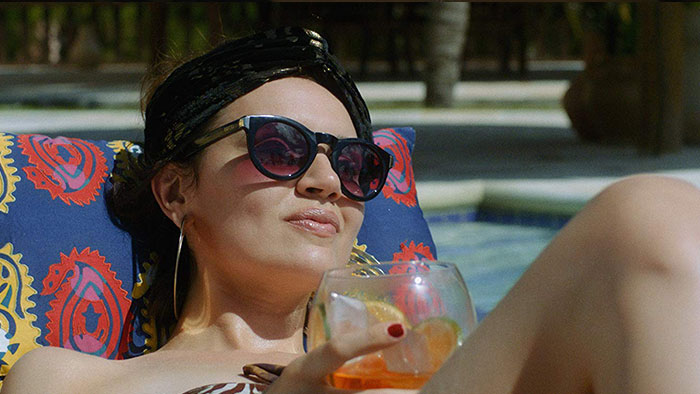 When I first heard of The Cannibal Club, and about its perspective on class, I confess I jumped to the expectation of something like Brian Yuzna’s Society. But The Cannibal Club is not coarse in the slightest; though it is thoroughly carnal. The word “cannibal” may also bring some expectations, depending on your film experience: this film is nothing like Raw (much more grown up) and nothing like Cannibal Holocaust (much more sophisticated). The cannibals we see here are more like Hannibal Lector if anything; or at least, high class but with more sex than intellect.

Yes, perhaps I should have mentioned earlier: there is as much sex as there is blood, though explicit without being gratuitous. Much of the nudity is rather beautiful, and much of the blood is decoratively applied. There is plenty to admire and enjoy about the visual style in The Cannibal Club; luxurious in a laid-back way, rather than flamboyant. The music mirrors that style beautifully – especially at the start – with rich jazz blues welcoming the viewer to the Brazilian sunshine.

Some critics have claimed that The Cannibal Club is filled with violence and gore: not so. Writer and director Guto Parente applies it with care, and although there are some brutal scenes, they are not every scene by a long way. The characters have plenty of opportunities to tell a story, and the actors fill those characters to the brim. Actually, what looked at first like slight overacting on the part of the main cast may well have been their characters playing a part to impress their employees and acquaintances.

Style, class, and sunshine are everything in this film; so it is perfectly apt that the plot itself is a simple one, to give them the center stage. The cinematography is as sumptuous as the sets themselves. And it was interesting: I was so enthralled by the visual experience when I watched The Cannibal Club last night that it took until this morning to digest the actual content.

So there’s plenty of food for thought in The Cannibal Club, as well as food for the senses. Just as long as you don’t start thinking of keeping an ax in the bedroom.