The Umbrella Academy Episode 6 opens up the Universe, giving us insightful answers and important character development.

The Umbrella Academy Episode 6 opens up the Universe, giving us insightful answers and important character development.


This recap of The Umbrella Academy Episode 6, “The Day That Wasn’t”, contains spoilers. You can check out our thoughts on the previous episode by clicking these words.

In the opening scenes of The Umbrella Academy Episode 6, we learn that Klaus (Robert Sheehan) time traveled to the Vietnam war, thrown into the thick of the battle during a night siren. We meet Dave, the man he fell in love with, relatively quickly. In the present day, I was surprised to see that Klaus wants to go clean, emptying his pill packet down the toilet.

With “Number 5” (Aidan Gallagher) employed again by The Commission, Luther (Tom Hopper) has heartily gathered the troops, weighing his sense of importance due to the irrefutable fact that the world is ending in three days. The others are curious about what happened to them when the apocalypse occurred, and Luther discouragingly explains that they all died. Moving the conversation swiftly, Luther expresses the idea that maybe his Moon missions for his father were linked to the end of the world. But the family are not interested, opting to leave Luther to ponder. Saving the world is canceled.

“The Day That Wasn’t” delves deeper into The Commission, which at this stage is timely. We know enough about the characters now for the series to open up the canon and understand how this universe works. The contract to kill “Number 5” is canceled. Cha-Cha (Mary J. Blige) wants to prove to the company that they still have it, but Hazel (Cameron Britton) has a newfound idea to save the world, presumably born from his newfound romance with the Diner lady. In a confusing and twisted version of events, Cha-Cha receives instructions to kill Hazel. 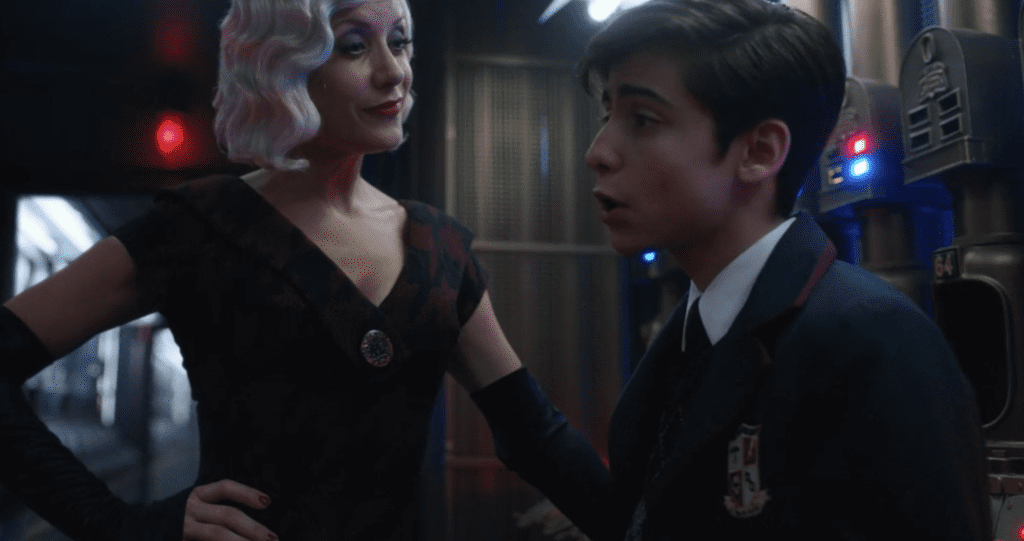 What we wanted to see is The Commission in action. The Umbrella Academy Episode 6 sees “Number 5” receiving a tour of the company by The Handler in 1955. We get an insight into the protocols and the cogs. I was taken back by the efficient process. At first sight, you do not associate The Commission with some evil organization; maybe they aren’t? As “Number 5 gets his first case, everything looks too kind for him – The Handler reveals they are making him his perfect body, but he is clearly up to something – he steals the Apocalypse file.

After the revelation that Vanya (Ellen Page) does indeed have powers, The Umbrella Academy Episode 6 deepens the relationship between her and Leonard (John Magaro), who is one creepy character. The pair is still spending time together, celebrating Vanya making it to the first chair for the upcoming concert. They decide to visit her family house and realize she was not invited to the meeting. She walks off upset, and Leonard steals one of The Umbrella Academy figurines. As Vanya rants about her family, the street lamps start bending, making Leonard wonder if her power is linked to her emotions, but she believes the entire street shaking was entirely a coincidence.

A few events then occur in “The Day That Wasn’t” that feel important; Luther finds out his Moon missions were to give him a sense of purpose, making him question whether or not he is a hero. The revelation forces him to share his worries with Allison, opening the door to their obvious feelings and finally persuading them both to kiss. Meanwhile, Vanya finds a notebook in Leonard’s house marked RH, which has loads of scribbles regarding “Number 7”. While important moments are happening, “Number 5” has been found out by The Handler regarding his meddling with the timeline and tries to kill him. “Number 5” manages to escape and return to the present day. He returns to the same morning when Luther is trying to convince others to put a plan together to save the world.

“Number 5” delivers an honest speech about getting their s**t together to stop the world from ending, and everyone is in agreement. So I assume everything that happened has been reset? He tells everyone that in order to save the world, they must protect Harold Jenkins. It’s heating up now!

Some interesting questions from The Umbrella Academy Episode 6; Cha-Cha fails to terminate Hazel, so what does that mean for her? Or if the timeline is reset does that mean she gets a second go? Or will she help Hazel in saving the world? If “Number 5” reset the timeline back to the morning, does that mean The Handler will be alive again? Or does she still remain dead in 1955? Klaus finally gets clean in episode 6 and he sees Dave – is that the reason he takes so many drugs? To stop seeing the dead? “Number 5” mentioned a Harold Jenkins at the end of the episode, and the notebook that Leonard kept hidden is marked with RH – presumably this is Reginald Hargreeves?

On a final note, the theory so far is that Vanya’s power is controlled by her emotions – what if her emotions become so extreme, she ends the world? Might be a stretch.