Proudly outdated and disappointingly mediocre, three generations of Shaft feel like at least two too many.

Proudly outdated and disappointingly mediocre, three generations of Shaft feel like at least two too many.

In Tim Story’s Shaft, there are three John Shaft’s, and you have to imagine that’s a couple too many. Richard Roundtree was the first, and to many remains the only one; his smooth-talking, no-nonsense private detective has been a Blaxploitation icon since the 70s, constantly emulated but never bettered. He shows up here almost as a reminder to everyone that there are levels, even in 2019.

This movie often forgets what year it is. Watching it, you could be forgiven for thinking that the middle Shaft, played here by Samuel L. Jackson as he was in John Singleton’s 2000 remake, had swapped his Chevy Chevelle SS for the DeLorean. In a cheeky plot retrofit, Jackson’s Shaft is now the son of Roundtree’s Shaft, and they both feel like holdovers from an abandoned age of moviemaking and political correctness. They’re both effortlessly cool, even now, but in a world that has warmed all the way up.

The third and youngest Shaft, played by Jesse T. Usher, is a stand-in for the contemporary climate in which the movie finds itself after a Stateside theatrical release and a global one on Netflix today. He’s an MIT graduate and a hotshot FBI data analyst who dresses like a middle-class white man and is staunchly anti-gun, anti-violence, and anti-Shaft. But when his lifelong friend Karim (Avan Jogia, late of Now Apocalypse, and an interesting actor that gets virtually nothing to do here) is found dead of a suspicious overdose outside a Harlem drug den, Young Shaft turns to his father for help. 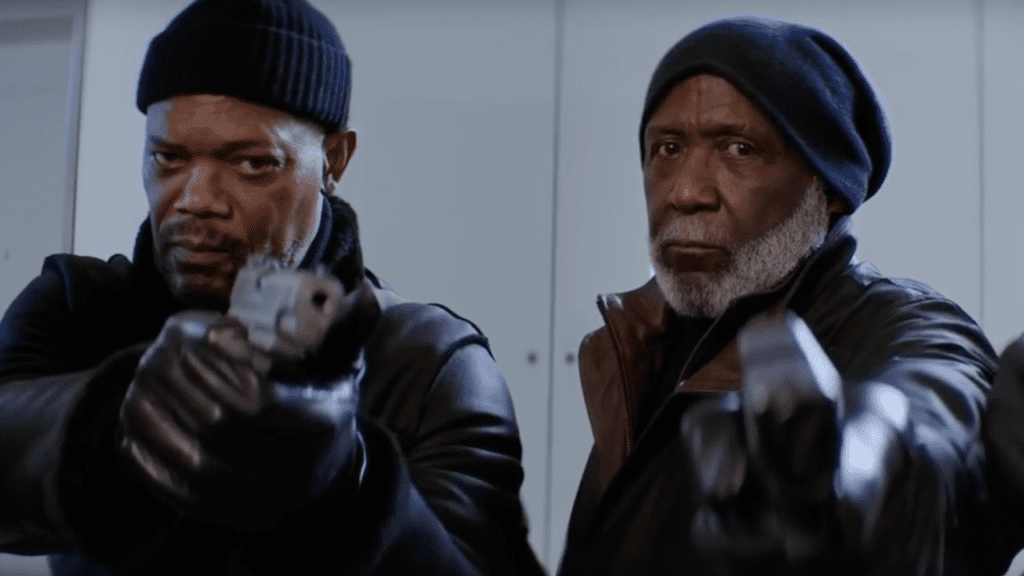 There isn’t much to this plot. It makes room for a love interest in Alexandra Shipp’s Sasha, and a veteran’s support program called Brothers Watching Brothers, and a mosque, but they’re all elements that exist to excuse either a gunfight or jokes about stereotypes and prevailing attitudes. The script, by Kenya Barris and Alex Barnow, isn’t clever enough to make much of this work. It toys with ideas of deadbeat dads, toxic masculinity, race, and gender, but in a tokenistic way. A smarter film would have made its points clearer, and perhaps avoided the charges currently being leveled against this one — that it’s advocating the Shaft Snr. worldview.

I don’t think that’s the case. In fact, I think the opposite is true. Story’s Shaft is laughing at Jackson’s, and Roundtree’s; the jokes are being made at the expense of the older men and their outdated ideology. It isn’t always clear, but it’s there. For all his “soft” tendencies — he was raised by his long-suffering mother (Regina King) after being caught in a crossfire as an infant — Usher’s Shaft is consistently presented as being highly capable. He’s smart, women like him, he’s well-trained in capoeira, and he’s an expert marksman. He can be Shaft without being Shaft, without succumbing to all the mean-spirited and outmoded behaviors of his father and grandfather. He can be better. And what’s more is that Jackson and Roundtree, in their own way, come to realize this throughout the movie.

Except maybe they don’t. It’s kind of unclear. And that, obviously, is the problem; you can never quite tell whether this Shaft is reveling in its uncensored attitude or critiquing it, so you can’t really say it works as subversion or as a provocation. It mostly comes across as confused and inconsistent, unsure of what it wants to say about parenting or its female characters or racial stereotypes and attitudes. Critics — the usual suspects, one must admit — have decided that this movie is one of the worst of the year. I’m not buying that. But it’s certainly one of the most puzzled, and unfortunately isn’t well constructed enough to be worth figuring out.