Yellowstone Recap: Watch What You Eat

“Only Devils Left” finds more drama for the Duttons, as their livelihood is attacked and tragedy looms.

“Only Devils Left” finds more drama for the Duttons, as their livelihood is attacked and tragedy looms.

This recap of Yellowstone Season 2, Episode 4, “Only Devils Left”, contains spoilers. You can check out our thoughts on the previous episode by clicking these words.

Everyone has something to lose, and in the case of John Dutton, it’s cows. Lots and lots of cows. Yellowstone Season 2, Episode 4 opens with hundreds of dead cows, as far as the eye can see, unwittingly fed bushels of some death-dealing fauna. We don’t know who did it, but John believes he does. With the field cordoned off as a crime scene and Kayce deputized by the Sheriff’s department so he can investigate further, “Only Devils Left” endeavors to live up to its title. By the time the Duttons have finished, there’s a good chance there might not be anybody left at all.

But it isn’t just livestock that the Duttons have their hands in. With Jamie having stepped down from the race for the Attorney General’s office, Cassidy Reid, John and Beth’s rival pick, is free to assume the position unopposed. That frees Jamie up to handle the administrative duties of the ranch, much to the chagrin of Beth, who is convinced he’s out to win their father’s favor by throwing her under the bus. That may or may not be true, but it’s easy to suspect not; for all her ruthless business dealings, there’s a reason that Jamie handles the books. According to him, her putting the Yellowstone’s money in a trust might lead to its ruin.

Elsewhere in “Only Devils Left”, Thomas Rainwater and Dan Jenkins cement their business deal — but it’s not entirely clear how the latter stands to benefit from it. Rainwater plans to annex the land where the casino is to be built in the name of his tribe, thus wresting it from government oversight — and the liquor-soaked iron fist of the Becks — but that also leaves them open to retaliation. Jenkins, who is constantly, hilariously threatened at the best of times, doesn’t like this idea, nor does he like how Rainwater’s annexation invalidates the terms of their agreement. 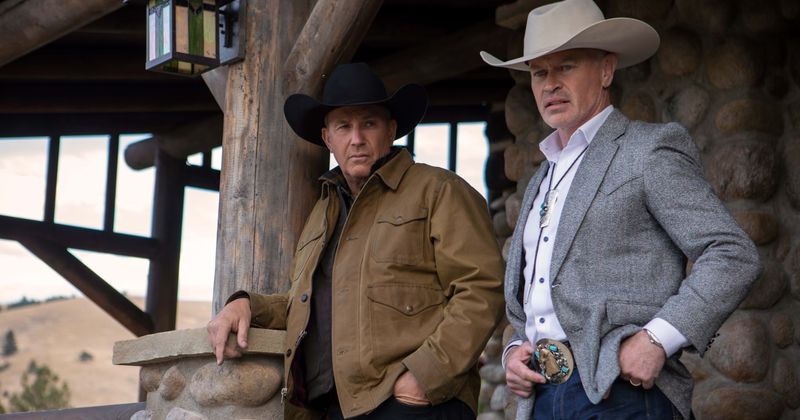 The Becks don’t like it either, having realized that Jenkins has gone through with the deal despite their warnings. They go to visit John in Yellowstone Season 2, Episode 4, and despite an initial altercation between their security and Rip, a relatively fruitful conversation occurs. The enemy of one’s enemy is one’s friend, after all, even though Jamie warns against an allegiance with the Becks, which to him is getting into bed with devils. “All the angels are gone,” replies John. “There are only devils left.”

Jimmy’s complicated past resurfaces in Yellowstone Season 2, Episode 4, as Ray and Blake, the two men Jimmy embarrassed in the previous episode, assault an elderly man on the ranch and demand Jimmy pays what he owes — a healthy sum that he can’t provide. The ongoing love triangle between Monica, Kayce, and Monica’s physical therapist also continues in “Only Devils Left”, though for now, it works out well for Kayce. But fondling a wedding ring like that can only mean one thing, and is antagonizing a guy like Kayce really the smartest thing to do?

It seems like everywhere Kayce goes, someone dies. This time it’s the young son of the rancher who has been killing cattle, although admittedly Kayce isn’t the one to pull the trigger. Still, he was deputized during the incident, and it looks bad for everyone involved — especially the Sheriff, who denied requests for back-up just to prove a point, and for which he gets a smack in the mouth, courtesy of John. Watching this incident reported on TV, the Becks determine that they know how they can help John.

Yellowstone Season 2, Episode 4 ends with the deadly field being sat alight, the only way to kill the clover that took the lives of hundreds of cows. John watches his property burn and smoke. I wonder if he should get used to it.