Mindhunter Season 2, Episode 4 discusses the black community and homosexuality during a telling time where neither were embraced or accepted.

Mindhunter Season 2, Episode 4 discusses the black community and homosexuality during a telling time where neither were embraced or accepted.


This recap of Mindhunter Season 2, Episode 4 contains significant spoilers. You can read the recap of the previous episode by clicking these words.

Episode 4 begins with Holden piecing together his downfall in Atlanta. He starts investigating the frequent murders of children in the area. He plays out a test where a white and black man speaks to children on the streets to see which man draws more attention; he believes the killer is a black man (mid-twenties) because a white man would not go unseen in the neighborhood.

The problem with Holden’s approach is that he shows a lack of understanding of the community he is in. He shows no empathy towards his findings, and instead blurts them out, expecting the community to embrace them. Back at the BSU, he chairs a meeting (with Ted Gunn in attendance) about his instincts in Atlanta — Ted approves the investigation after a ransom call is received. Bill and Holden fly to Atlanta.

At Atlanta, they set up a task force, and Holden once again speaks to Tanya and her acquaintances, acting like he is doing something to help them. When they meet Commissioner Brown, Holden gives his theory on the profile; black man, mid-twenties, predator and very likely to be a hebephile. Commissioner Brown states if there is no kidnapping, there is no federal crime and discontinues the FBI on the investigation.

Holden’s approach and lack of sensitivity are always is his own undoing. His lack of self-awareness is appalling in Episode 4.

As for Wendy, she remains behind, but she does not want to pause her research and decides to interview Elmer Wayne Henley Jr and his relationship with a serial rapist and killer Dean Arnold Corll. Greg fails at the interview, and chokes, unable to get any answers. But Wendy soon realizes she has a talent for interviewing serial killers. Henley Jr does not want to discuss his abusive father, so Wendy talks about her ex, how she used to control her — the student and wise professor dynamic — and then Henley Jr opens up, but he insists he did not participate in the killings, and only killed Dean out of self-defense. 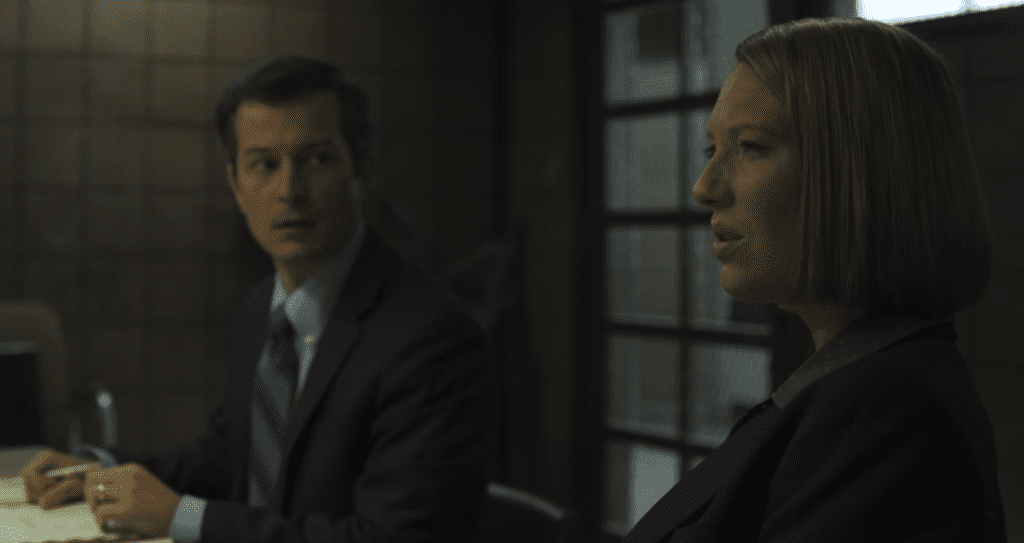 Elmer is flagrantly talking like a homophobic man, but it is clear from the implications of Wendy’s questions that Elmer is defensive, as it involves his friendship with Dean and the young boys he used to rape.

This was a fantastic scene; on the one hand, it shows Wendy embracing the methods, and on the other, it shows the extreme denial showed by Elmer Wayne Henley Jr. The scene becomes clear of the time they are living in when Greg believes the entire story with Wendy’s ex was made-up. He refuses to believe Wendy is a lesbian.

Mindhunter Season 2, Episode 4 ends with Nancy begging for Bill to come home. The police want to talk to their son Brian. It turns out, Brian was at the crime scene where the murder took place near their home, and he took the children to the place where the teenagers were. It was Brian’s idea to put them on the cross.

What devastating news for the couple, and a revelation that is likely to change the rest of Season 2.