Brian Banks is an effective indictment of the business of the criminal justice system when politics dictate someone eventually has to pay for the people’s investment, whether they are guilty or innocent.

Brian Banks is an effective indictment of the business of the criminal justice system when politics dictate someone eventually has to pay for the people’s investment, whether they are guilty or innocent.

When I first heard of the Brian Banks story nearly a decade ago when he was on The Tonight Show with Jay Leno, I felt like Hugh Grant by being positively befuddled about how everyone got to this point in Hollywood fandom. Why was an admitted rapist on the couch of the most revered late-night show of all time, telling his story of maintaining his innocence when he was recently paroled (which turns out wasn’t at all recent)? I wouldn’t have believed it or would have remained skeptical as, at the time, I was a young man in my 20’s living in my lily-white suburban world, until that one thing came out about the case: The victim contacted him after he was released from prison and admitted on tape that she, in fact, was never raped at all.

Marketed as an inspirational true story, what separates Brian Banks (played by City on a Hill‘s Aldis Hodge) from other stories of its ilk is that he was an All-American high school football player for one of the great high school football programs in the country, Long Beach Poly Tech. He then committed to a legendary college program that experienced a rebirth under then-coach Pete Carroll, the University of Southern California, and had dreams of playing in the NFL. As discussed above, he was accused of dragging a fellow female student across the school, past classrooms filled with student and teachers that never saw him, and charged with rape as an adult at 16 years old. He was eventually sentenced to 5 years in prison, not juvenile detention, mind you, and after being paroled, maintained his innocence with the help of the creator of the California Innocence Project, Justin Brooks (Greg Kinnear). The accuser, at the time, sued the school for the lack of safety and won a summary judgment of $1.5-million dollars.

Brian Banks was directed by Tom Shadyac, a man known for multiple crowd-pleasing comedies in the ’90s (Liar Liar, Ace Ventura 1 & 2, Bruce Almighty), and for less successful dramas (Patch Adams, Dragonfly). He has found a happy medium here; while the script still succumbs to the pitfalls of the genre, his eye catches unusual moments of the Banks story that have weight in the smallest places (the camera work when Banks tells someone his predicament is a nice touch). The best moment of the film comes when he was misled by his legal team and we then realize just how quickly things can go from bad to worse, it’s a fully-alert nightmare. 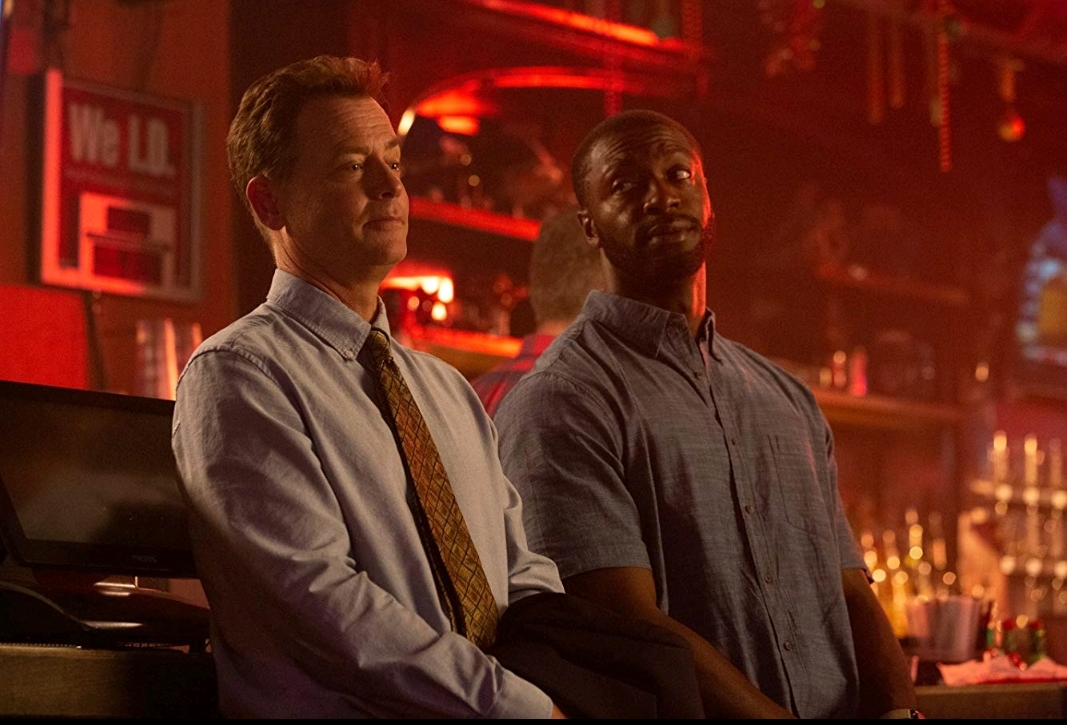 The two leads are well cast, with Hodge finally being given chances to show the potential we saw in him years ago in a guest turn in Friday Night Lights; he looks the part of an athlete fighting to get a chance that was stolen from him. Kinnear has always been a versatile and even under-appreciated actor, who can move from various genres effortlessly. This is one of his better roles in years as a man who looks at Banks’s case with cynical focus after years of fighting an unjust system. Credit should also go to The Mindy Project‘s Xosha Roquemore, who does a good job here of giving us a glimpse what is going on inside this person’s head, which is a complicated and ungrateful role to play.

The script by Akeelah and the Bee scribe Doug Atchison sometimes lacks focus in tone (the knee jerk reaction to ramp up a love story is unneeded) that may have a few too many hands in the cookie jar here, but does produce a handful of raw, eye-opening moments that are highly effective on the metaphorical potholes in the criminal justice system. The in-depth look at the criminal justice system is not as in-depth as one would hope. The film is more interested in the personal and emotional toll of what Banks has to go through to get a retrial and how he handles what life has chosen for him. I do wish the film would have had the mentality of A Civil Action, that has a more in-depth look at how the criminal justice system is based on relationships and money, than the ethics behind it. Brian Banks is a solid film with details that were more ironed out than needed.

This film focuses on the personal toll, the focus to make professional football, instead of the behind the scenes legal fight. This is fine, for now, but I’m hoping in the future a film could be made that takes that tone, the mentality of a legal drama or thriller, which it clearly has the makings of.

One thought I had was how the timing is awfully curious; why wasn’t this film made before the #MeToo movement instead of right smack dab in the middle of it? The simplest explanation might be is that Shadyac and Atchison are not asking you to ignore that social movement; they gave you a small glimpse of an effective indictment of the business of the criminal justice system when politics dictate someone eventually has to pay for the people’s investment, whether they are guilty or not, which is what Black Lives Matter has been all about. Not every lawyer is good or just, judges have to worry about the political ramifications of their own rulings, schools have to worry about their view in the media so they keep that money rolling in, and most of all, the system is so overrun, snap judgments are made instantly without proper investigations. They aren’t saying victims of sexual assault should not come or made to be afraid to come forward, the point is that there are people in this world who are wrongly convicted and shouldn’t have been, and that every person accused deserves an honest, proper investigation.