Carnival Row Recap: Finding Your Place In The Burgue


This recap of Amazon Prime’s Carnival Row Season 1, Episode 2, “Aisling”, contain significant spoilers. You can read our recap of the previous episode by clicking these words.

At an early stage, Carnival Row is intriguing, but the Amazon Prime Series is struggling to piece the characters together. There are such gulfs in their plotlines that I’m eager to understand how they will conjoin to allow the overall story to prosper. Episode 2, “Aisling” is not a disastrous chapter by any means, but I was left needing more.

Straggling for more truths, Philo (Orlando Bloom) investigates the murder of a mysterious fae named Aisling. The audience understands the fate of the fae in question, as the last episode saw the monster rip her to shreds. For Philo though, he believes he is on to another case. The fae’s friend doesn’t understand why anyone would want to harm her, and the coroner’s report suggests that the killer took the liver.

Episode 2 then reverts its attention to the wealthy socialite Imogen (Tamzin Merchant), who cares more about money and reputation than sense it seems. At the start of “Aisling”, she tries to have Agreus (David Gyasi) removed from the neighbourhood, but fails. Imogen tries to ignore Agreus, but there’s an enticing aspect to him that she cannot remove. In one particular scene, she is forced to share an umbrella with Agreus, which sparks a fiery, unfriendly conversation. 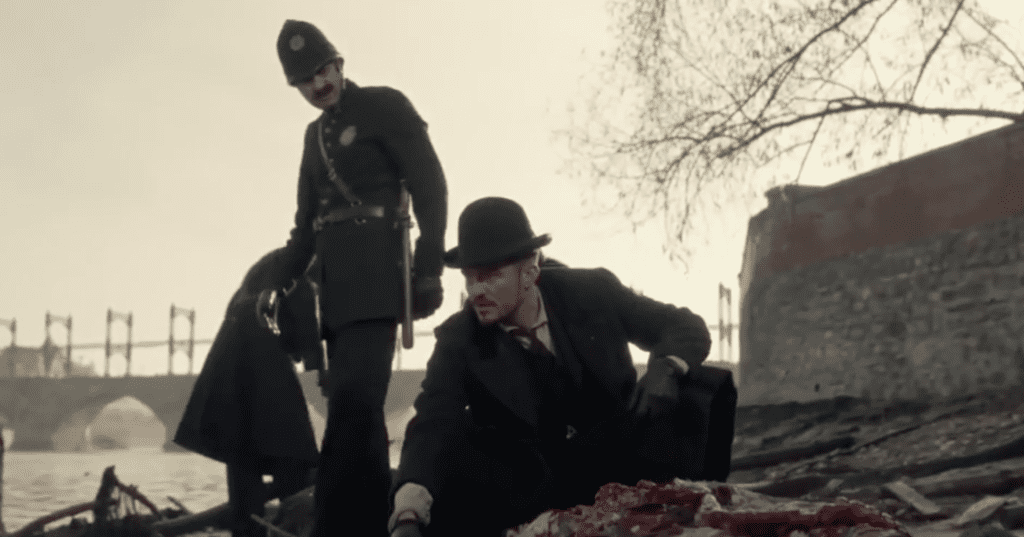 Vignette’s (Cara Delevingne) place in The Burgue becomes worse in Episode 2. Ezra Spurnrose tries raping her, but she manages to fight him off and flee. Now she is no longer part of the Spurnrose residence; Tourmaline introduces Vignette to a new group of faeries, who are flagrantly rebellious in The Burgue. Vignette claims it is “time for a fresh start”, but a part of me wonders if she is spiralling rather than finding answers for herself. The group of faeries ask her to steal a flag and return it.

Overhearing the pending arrest of Vignette after Ezra set her up, Philo pays off Ezra and in return, they drop the charges against Vignette. Carnival Row Season 1, Episode 2, “Aisling” closes with Vignette managing to steal the flag and flee — before she flies off, she bumps into Philo who questions her behaviour. Vignette asks Philo whether or not the community know the truth about him, before re-grabbing the flag and shooting off to the distance. The tension between them was apparent.

You can read the recap of the third episode by clicking these words.