Carnival Row Season 1, Episode 1, “Some Dark God Awakes” is a satisfying opening, introducing the two leads in a world of spiralling politics and fantasy elements.

Carnival Row Season 1, Episode 1, “Some Dark God Awakes” is a satisfying opening, introducing the two leads in a world of spiralling politics and fantasy elements.


This recap of Amazon Prime’s Carnival Row Season 1, Episode 1, “Some Dark God Awakes”, contain significant spoilers. You can read our season 1 review by clicking these words.

There is a lot of resentment and politics bubbling under the surface of The Burgue in Episode 1. Carnival Row spends no time messing around, muddling the plot with deep underlying darkness that will set the course for our leading characters.

“Some Dark God Awakes” opens with Vignette Stonemoss (Cara Delevingne) flee Tirnanoc. She has created a passage so she and fae folk can escape. The escape is deadly, consisting of large monster-looking hounds and bayonets screaming by her. Eventually, she flies away with her wings and lands on a ship that soon becomes hurt by a massive storm. Before the storm incident, she is seen clutching a photo of a handsome young man, waiting for her arrival at The Burgue.

That man is Rycroft “Philo” Philostrate (Orlando Bloom) who is already at the Burgue. He has tasked himself to investigating “Unseelie” Jack, a mysterious assailant with a grudge against the fae folk. There’s a killer afoot, and a racist one at that. Philo is casual by nature and clearly does not intend to play by the rules in the Amazon series. He meets a victim, who states the attacker had a uniform.

Vignette arrives as part of the shipwreck washed up at the bay in Episode 1, and immediately questioned by the police. The ship belonged to Ezra Spurnrose (Andrew Gower), and she quickly becomes the maid of the residence, attending to the needs of Imogen Spurnrose (Tamzin Merchant). Imogen and her family are the wealthy criteria of Carnival Row and “Some Dark God Awakes” reveals her naivety to the community, and is self-serving to her own needs. 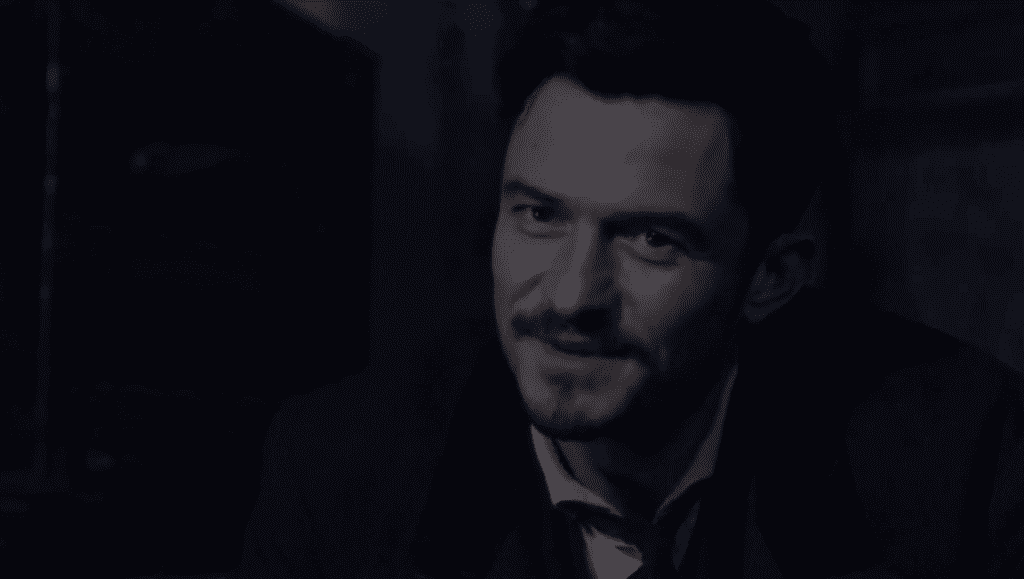 Back to Philo in Carnival Row Episode 1. He speaks to a Police Sergeant at an apparent alt-right wing political gathering. His hunch is that it’s the police attacking the fae folk, but then an altercation leads him to believe it is a sailor. Eventually, he finds a sailor that matches the description and what ensues is a late-night chase scene, zipping across the tops of the buildings. Philo finally has the “Unseelie Jack” cornered, and sailor talks about how the darkness is coming, and it lies beneath, before jumping off the ledge to his death.

Near the end of “Some Dark God Awakes”, Vignette finds out Philo is alive — we learn throughout the chapter that they used to be lovers, which is why she was holding a photo of him, but she believed him to have died during the war — she is angry and upset to learn that he is alive, so she grabs a knife and goes to find him. Meanwhile, Philo returns home to Portia, a woman he is seeing who is frustrated at their on-off relationship. She leaves his house, and as Philo rests in bed, Vignette flies into his room and lands on top of him with a knife.

Vignette asks Philo why he lied about his death with emotional statements like, “you destroyed me, you left me in the ashes of my homeland”, while threatening to kill him. She claims that he is not worth killing and leaves.

Carnival Row Season 1, Episode 1, “Some Dark God Awakes” ends with some monster lurking in the sewers — it manages to kill a nearby faery.

You can read the recap of the second episode by clicking these words.