Home » Film » Film Reviews » The Art Of Racing In the Rain Review: Manipulating the Wheel

The Art Of Racing In the Rain Review: Manipulating the Wheel

Here is a film made for that lazy Sunday afternoon that makes you appreciate what you have or long for what you don’t.

Here is a film made for that lazy Sunday afternoon that makes you appreciate what you have or long for what you don’t.

Let’s get one thing straight about Hollywood — not every film or television show is meant to be a piece of art. Don’t get me wrong, they can be, but first and foremost, they should essentially be considered a simple form of entertainment. Besides season four of David Simon’s The Wire, rarely has cable, let alone network television, ever come close to a visual art form. Films are the exception, but while Roma was hailed by critics, it was the happy medium and crowd-pleasing Green Book that took home Hollywood’s top prize. Simply put, life is hard and most of these are made to get your mind off your troubles for a couple of hours or an excuse to find someone to cohabitate with. Most of us don’t view the medium as a Jackson Pollack and sometimes you just need a movie about a man’s best friend to get you through the day. The Art of Racing in the Rain is that movie and was made for that lazy Sunday afternoon that makes you appreciate what you have or long for what you don’t.

The film stars Milo Ventimiglia as Denny Swift, a professional Formula One race car driver who has been regulated to the minor leagues of racing and is waiting for that one opportunity to make his dreams come true. His best friend is Enzo (voiced by Kevin Costner), a Golden Retriever he spotted out of a litter of cuteness, but he essentially picked Denny as much as the other way around (I know, mind-blowing). As the years pass, Enzo has been taught the art of racing by his best pal a guy could have, even in the rain as the title suggests. He wishes he could be the one in the car just as much as Denny, but unfortunately, Enzo is all paws, no thumbs, and can’t figure out how his dew claws work to manipulate the wheel. 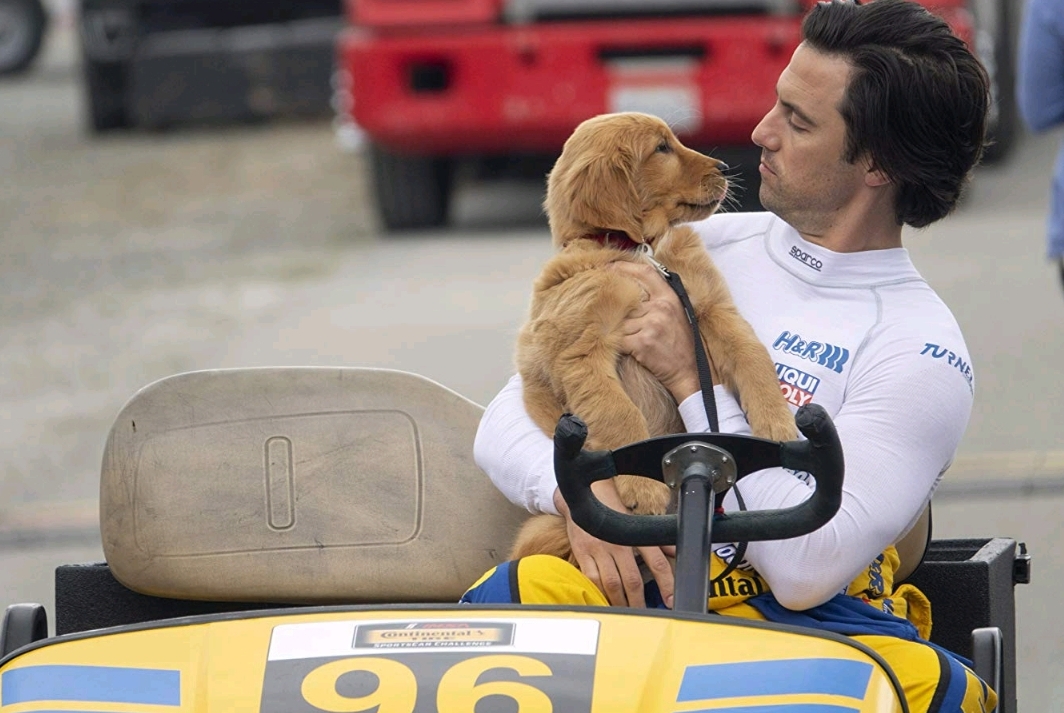 Based on the best-selling smash novel by Garth Stein, Art stayed on the New York Times Best Seller’s list for 156 straight weeks (note to self, if you want to write a successful book and you are not a reality or Hollywood star, make sure to write a book that incorporates canines), and has been in adaptation limbo since Patrick Dempsey (who is a producer here) had his eyes on it 2009. While the book does have a central theme about reincarnation and faith, it is nowhere near as heavy-handed as any of the W. Bruce Cameron adaptations, and has a noticeably lighter touch (with good reason: Cameron’s books are steeped in religious faith and Stein’s book was inspired by a Mongolian legend from the documentary State of Dogs).

Art was directed by Simon Curtis (My Week with Marilyn and the underrated Woman in Gold), whose biographical film work is usually light on truth and encased in a thick layer of melodrama. The script is hardly uplifting and is designed to give you a good cry by deliriously manipulating your feelings for a solid 2 hours. The film is too long, but the actors here are winning in their roles — even with Ventimiglia settling into playing his character almost as a stoic, strong and silent type; while he is strangely limited in any emotional response when needed, which is a left turn considering the melodrama involved and a tempestuous response would have been welcomed. The film’s secret weapon here though is Costner, whose voice work as Enzo is the sole comic relief in an otherwise hefty experience. His weathered, mountain west voice with an almost leathery delivery that combines a childlike innocence is entertaining and hits all the right notes (which is key in almost all of the canine voice-over films this decade). It wore me down and eventually won me over to look past the obvious genre pitfalls to give this Stein adaptation a mild recommendation; it’s worth a rental or viewing on that lazy weekend on basic cable and procrastinating the day away.