Home » Streaming Service » Netflix » Invader ZIM: Enter The Florpus Review: Updated, But Just As Funny And Weird As Ever

Invader ZIM: Enter The Florpus Review: Updated, But Just As Funny And Weird As Ever

A new update that manages to update the original while retaining its weirdness and humor, Invader Zim: Enter the Florpus is as brilliant now as it was then.

A new update that manages to update the original while retaining its weirdness and humor, Invader Zim: Enter the Florpus is as brilliant now as it was then.

A new Invader Zim movie on Netflix seemed slightly surprising because it has been eighteen years since the show first aired on Nickelodeon.  Despite not watching it for a long time, I have very fond memories of the show and I was hoping Invader Zim: Enter the Florpus would bring those memories flooding back.

Don’t worry though if you haven’t seen the original series because the story of Invader Zim: Enter the Florpus is kept simple. Zim (our lead character), who if you hadn’t guessed is here to invade Earth, has found out that the almighty leaders ‘The Tallest’ have no intention of coming to Earth and therefore he is feeling low and losing confidence. His nemesis Dib sees this as a great opportunity to defeat him. It couldn’t be any simpler.

Invader Zim always had a very unique, very odd sense of humor and it’s why its fans, like me, loved it so much. There was nothing quite like it and watching it now there’s an obvious influence on shows like Rick and Morty. There’s definitely a similar type of adult humor there. It’s weird and strange while at times, quite dark too.

Invader Zim: Enter The Florpus doesn’t miss a beat, getting straight in there with this style of comedy. You’ll be laughing instantly. I know without context a line like “Nobody stretches like that unless they’re warming up for evil!” might mean nothing to most people and it might not make you laugh but I was literally laughing out loud and didn’t stop for the rest of the movie. 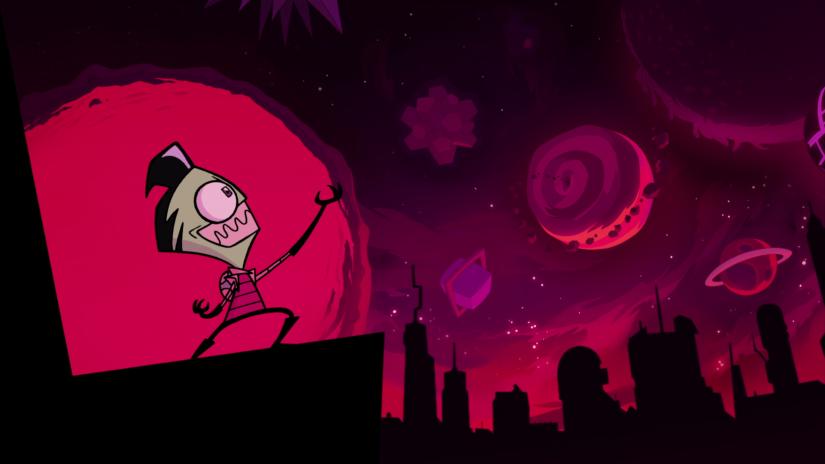 The voice acting from the main cast is tremendous. Richard Steven Horvitz as Zim, Rikki Simons as GIR and Andy Birman as Dib are so fantastic in the roles they know so well and the delivery of the comedic lines is just so perfect.  The comedy is well-edited and you’ll be hard-pressed to find many funnier shows on Netflix. There’s a great moment (which was actually seen recently in DC’s Shazam!) where our two main rivals are shouting at each other from a distance. Only they are so far away they can’t really hear each other and cries of “What?!” and “I can’t quite hear you!” are heard.

Sidekick GIR proves to be one of the great animated comedy characters. GIR is the robotic and very weird assistant of Zim but also plays the part of his only friend. To blend in on earth GIR has a ‘mongoose-dog’ suit because, well, why not? GIR is hyperactive, always happy and literally makes me laugh with every line he utters

The animation shows where Netflix’s money has been spent. Invader Zim: Enter The Florpus looks fantastic. There’s constantly so much going on that it will take multiple viewings to take it all in. The colors are something else too — vibrant and bright, they literally pop out of the screen at you. Zim has never looked so good.

I am so happy that Enter The Florpus lived up to my expectations. Nearly twenty years after its original airing, Invader Zim is still as brilliant now as it was then. The creators deserve all the plaudits for updating it and keeping it just as weird and funny. I only hope this is a success so we get much more Zim in the future.