Home » Streaming Service » Hulu » Four Weddings and a Funeral Recap: Can There Be A Happy Ending?

Four Weddings and a Funeral Recap: Can There Be A Happy Ending?

Four Weddings and a Funeral Season 1, Episode 10, “New Jersey” — The Finale, provides a satisfying and emotional ending to a good-natured series.

Four Weddings and a Funeral Season 1, Episode 10, “New Jersey” — The Finale, provides a satisfying and emotional ending to a good-natured series.

This recap of Four Weddings and a Funeral Season 1, Episode 10, “New Jersey” contains spoilers. You can read the recap of the previous episode by clicking these words.

Four Weddings and a Funeral has had a bad rap with critics, but if you have a heart, Episode 10 will surely have you elated and tearful at the same time. “New Jersey” moves forward one year; Kash is landing significant roles in theatre, Ainsley and Bryce are getting married, Craig and Zara’s baby is born, and Duffy and Gemma are sleeping together, but Gemma’s son cannot know.

A lot is going on, but the noticeable outsider is Maya. She has returned to New York and is running for State Assembly in the elections. After wise advice from Craig that Ainsley “deep down” misses her, Maya decides to take a quick trip to London in time for Ainsley’s engagement party.

Not all is well in Bryce and Ainsley’s relationship; Bryce is fed up of Ainsley’s obsession with Kash in the lead up to the wedding. After a heated argument, Maya turns up with giant cards, explaining how sorry she is, and how much she misses their friendship. It was a sweet moment between two friends that love each other, that is quickly diminished when Ainsley closes the door on Maya.

As for Duffy, his mother is sick again and has to return to New Jersey and coincidentally meets Maya on the plane. This provided an amusing moment because Duffy vows to not speak to Maya (as he’s taken sides) but ends up sitting next to her on the plane anyway. When he arrives in New Jersey, after encouragement from Maya, he rings Gemma and admits he is in love with her before swiftly putting the phone down. 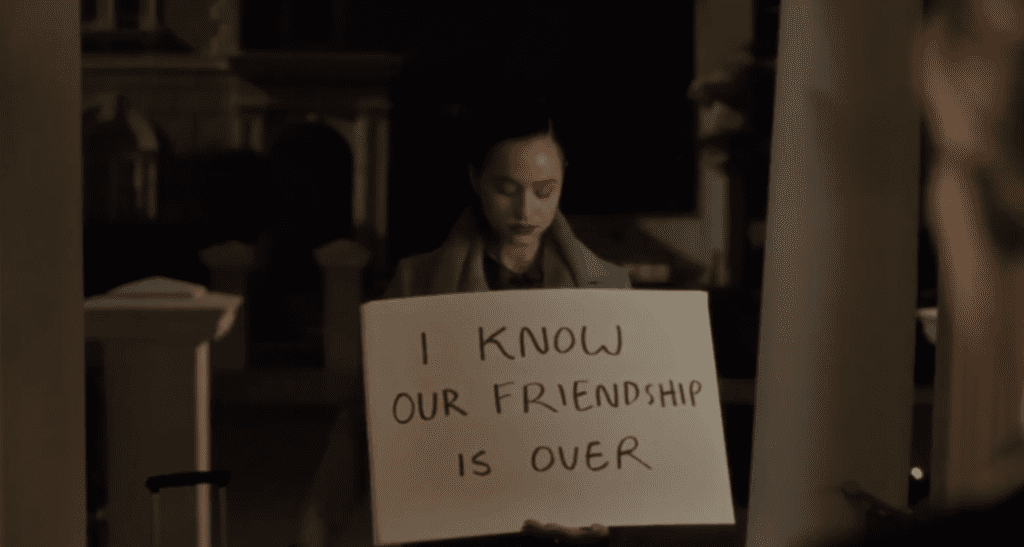 This is typical Duffy going into flight mode due to the fear of getting hurt. Gemma flies over to New Jersey to support him and his mother. In a tearful moment, Gemma tells her son that Duffy is her boyfriend, and he wells up, explaining that he loves Duffy too but cries, “does that mean I love Daddy less”. It was an overly sweet moment that I was not expecting.

And then a wedding is confirmed in Episode 10, “New Jersey” — as Gemma watches Duffy look after his mother, she realizes how much he means to her and asks if he wants to get married.

Meanwhile, Ainsley wants to save her relationship with Bryce and get over the “Kash situation” once and for all. Ainsley meets Kash at the stage door to his theatre play and learns that Kash never left her at the alter because of Maya. Ainsley then meets Bryce at their chosen Church and tells him she doesn’t want to get married because she only wanted it out of insecurity surrounding Kash, but she does want to spend the rest of her life with Bryce.

It’s wedding time! Four Weddings and a Funeral Season 1, Episode 10, “New Jersey” ends in happy terms. Maya is invited to Gemma and Duffy’s wedding; there’s a tense moment when Maya turns up to help out with the decorating, but Ainsley brings her guard down and invites her over to help. Ainsley gives Maya her approval regarding Kash, claiming she cannot ruin true love, but Maya is convinced it is too late.  Kash will not fly over so Ainsley lies, and says Maya is getting married to Duffy and that he must stop it. Kash crashes the wedding and realizes he has been stitched up. Gemma and Duffy marry, and Maya and Kash reconcile with a kiss.

A happy Four Weddings and a Funeral finale.

1 thought on “Four Weddings and a Funeral Recap: Can There Be A Happy Ending?”